Natella Toidze “Be true to yourself...”

In December 2009 Natella Toidze’s retrospective exhibition opened at the Tretyakov Gallery. The works on view give a full idea of the creative path of this interesting artist who comes from a celebrated artistic dynasty, has displayed at many international and all-Union exhibitions, and is a corresponding member of the Russian Academy of Arts, awarded a gold medal by that body.

The work of Natella Toidze is, first and foremost, a reflection of profound emotions and the desire to interpret the world around her. This explains why its themes, subjects, and media are so diverse. Her first and main teacher was her father, the well-known sculptor and graphic artist Georgy Moiseyevich Toidze; he and the creative world which surrounded her from birth exerted a tremendous influence on her. The models, clay, pencils, books and conversations about art, as well as the numerous encounters with friends of her grandfather, Mose Ivanovich Toidze, a pupil of Ilya Repin and founder of the Academy of Arts of the USSR, and her uncle Irakli Toidze, the well-known poster artist, all helped to form Natella’s inner world.

Her talent for painting revealed itself in her early works, and in the small watercolour “Fish” (1967) Toidze shows herself to be a splendid colourist. All the objects are painted somewhat conventionally and everything is based on colour. The table silver shines, the mother-of-pearl surface of the cleaned fish absorbs the colour of the emerald glass bottle and light-blue tablecloth. The picture’s colouring resembles an emerald, light-blue sea and turquoise dark-blue sky reflected in a greyish-iridescent shell.

The young Natella once met the famous artist Martiros Saryan who said, “Always be true to yourself”, words that sounded simple enough, but with time proved to be the best advice to a budding artist. This simplicity concealed a great deal of truth — reflections on Russian art, the talent and the fate of the artist, the “genetic memory” that is the connecting link between the generations, and the fact that an artist only becomes a real artist when all his past experience, instead of making him a hostage, leaves him freedom of choice.

This is precisely the path that Natella Toidze chose. She entered the “1905” art school to study stage design, deliberately not choosing the painting faculty. Her studies allowed her to think in different categories, to discover for herself a new understanding of the space and scale of the canvas; and to recognise the importance of the dialogue between the viewer and the artist.

So it was that she produced her large scale works (“Before Snowy Winter”, 2007). Here the scale is commensurate with a human being, who can “enter” the picture like a different world. The viewer ceases to be a mere observer and finds himself “included” in the artist’s world of imagery. All trivia disappear from the pictures leaving the main thing, nature and man in harmony.

Natella’s artistic method lies not in any particular, recognisable style, but in the constant search for the right plastic treatment of the task in question, to achieve which she makes free use of a wide variety of painterly devices.

The “Cezanne-type” still-lifes with a white tablecloth and reverse perspective (“Still-life in the Kitchen”, 1974) and the “Levitanesque” landscapes with their multifaceted content (“Poles”, 2000) are all allusions to existing cultural traditions: post-impressionism, the avant garde, and the Moscow and Georgian schools of painting. Drawing on the experience of her predecessors, she creates her own system of values and coordinates, which do not depend on fashion.

In recent years the decorative element in her work has grown stronger. In the diptych “Flora and Fauna” (1999) each part of the picture has a character of its own. The heroines take the form of African girls. This exotic treatment of the images makes it possible to concentrate on beauty of line and clear silhouettes that are most effective against the background of blossoming decorative vegetation painted in broad, short strokes in many directions and all tones from a gentle pink to a dark red. The ornamental background, mass of detail, silhouettes, large splashes of colour, rich palette and contrasts all make this work most striking and decorative.

At first glance Toidze’s pictures may seem easy to understand, but the more you look at them, the more meaning they have. On the space of the canvas each object acquires a special significance. In her work the artist combines a great deal: decorative and natural vision, complex spatial treatment and flat composition, and most unexpected colour combinations. Each canvas by Natella Toidze is a profoundly calculated and resolved task, and her work as a whole is a reflection of the artist’s complex inner world. 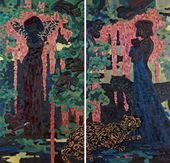 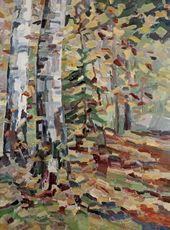 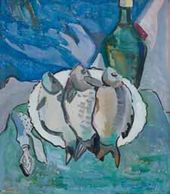 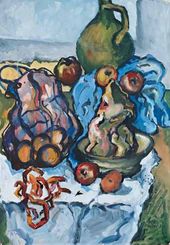