On November 17 2009, large crowds greeted the opening of the Lado Gudiashvili exhibition at the Tretyakov Gallery on Lavrushinsky Pereulok. Gudiashvili (1896-1980) was an outstanding 20th century Georgian artist; the current exhibition focuses on a short period of his creative life, the five years he spent in Paris from 1920 to 1925. These were Gudiashvili’s formative artistic years, in which he established the creative identity he would retain for the rest of his life; the style he developed in Paris made his art especially original and attractive. Anyone who came to Tbilisi during the post-war years wanted to visit the enigmatic master’s studio - and visitors always left enthralled by the warmth of this highly cultured, silver-haired artist who seemed to open his creative secrets exclusively for them.

Lado Gudiashvili (Vladimir Davidovich Gudiev-Gudiashvili, to give him his Russian name) was born in Tbilisi (then Tiflis) in 1896. From 1910-1914 he studied at the Tiflis school of Sculpture and Fine Art, which was under the supervision of the St. Petersburg Academy of Arts. By the end of the 1910s Gudiashvili was already working as an independent, promising young painter.

Tiflis had a rich and vibrant artistic life in those years. A large group of creative literary-artistic intelligentsia was at once closely connected with national Georgian life and nurtured by the best traditions of European and Russian culture. Tiflis attracted many poets and avant-garde artists from Moscow and St. Petersburg; they came first out of curiosity, having heard about a unique artistic “paradise” in Tiflis, and later to get away from the troubled years of war and revolution. In the mid-1910s, in addition to such members of the Georgian intelligentsia as Grigol Robakidze, Tician Tabidze, Paolo Yashvili, and Georgi Leonidze, many well known non-Georgian artists and poets were working in Tiflis, such as Alexei Kruchenykh, Ilya and Kirill Zdanevich, Sergei Sudeikin, and Nikolai Evreinov.

It was precisely during those years that the world discovered the great Niko Pirosmani (Pirosmanashvili) who became a symbol of the artistic rise of Tiflis. Every body, including the young Lado, was fascinated by Pirosmani’s art, which was very ethnic in its character and spirit. The favorite motifs of Pirosmani’s paintings were princes’ feasts and carousing “kintos” (vagabond tradesmen). Gudiashvili loved these motifs, too. However, as opposed to the self-taught genius Pirosmani, Gudiashvili studied extensively, and by the end of the 1910s he had become a renowned professional painter whose works were widely exhibited in Tiflis. At the end of 1919, the Society of Georgian Painters sent Gudiashvili to study in Paris; the society also sent to France his older colleague and friend David Kakabadze (1889-1952), who later became a founder of cubism in Georgian art.

Paris warmly welcomed the two young Georgians. Both of them, especially the sociable Lado, quickly joined a diverse Montparnasse artistic circle. In his first month in Paris, Lado became close to Amedeo Modigliani, and even managed to draw his portrait not long before Modigliani died. Gudiashvili also met Pablo Picasso, Fernand Leger, Tsuguharu Foujita and many other frequent visitors of the famous La Rotonde cafe. Among them were Russian “Parisians” as well, such as Natalya Goncharova and Mikhail Larionov, and Sergei Diaghilev with the dancers from his Ballet Russes. Celebrities came from Soviet Russia, as well: Vladimir Mayakovsky, Ilya Ehrenburg and many others. They all were young, talented, energetic people. They craved success and were eager to socialize. The incomparable Lado was the life of the party; he took the most active part in the charity costume balls that were arranged annually (and sometimes several times a year) by the artistic bohemians of Montparnasse. Gudiashvili dressed in the most exotic Egyptian or Himalayan costumes and danced away at those balls or out in the street before La Rotonde. The Tretyakov exhibition features wonderful group photographs of those parties, in the centre of which we are sure to find the painter.

But Gudiashvili was not just entertaining himself in Paris. He trained rigorously in various studios and academies, worked a great deal and with success. Soon his original — and, for many, exotic — paintings were noticed. The painter began to show frequently in the Salon d’Automne and private galleries. His works were bought by collectors and artists, such as the Spaniard Ignacio Zuloaga who as early as 1920 had bought Gudiashvili’s painting “Drinking-bout with a Woman” and three drawings. (Zuloaga had planned to pass them on to the Museo del Prado.) Everything seemed to be going well. But at the end of 1925, when many painters, poets and writers began leaving the Soviet Union for the West, Gudiashvili suddenly left Paris and returned to Soviet Georgia. Lado himself, and those who knew him well, said that he was overcome by longing for his native Georgia. Maybe it was nostalgia, or maybe it was an anxious premonition of the tragic changes already hanging over Europe — perhaps both. During his life in France, Gudiashvili never forgot his youth in Georgia, and Georgian motifs clearly dominate the paintings of his Parisian cycle: the same carousing men (not as merry, instead quieter) dressed in black clothes, and nude or half-nude women with graceful curves and large, sad, almond eyes. Even Lado’s landscape motifs, watercolours and drawings of French towns and villages resemble the landscapes of his beloved Georgia.

Nevertheless, Gudiashvili’s years in Paris were very important for his creative work: this was the period that shaped his identity, his creative style. In these years he created a unique blend of influences, bringing together national Georgian tradition, Persian miniature (especially in composition and filling the canvas or paper surface vertically, from the bottom up), symbolic interpretation of recreated images and plots (which he had learned earlier in Tiflis), and the monumentalism and ornamentality inherent to 1920s European Art Deco (which itself derived from symbolism). All of these influences were organically intertwined in Gudiashvili’s art, making it original and unmistakably his own. Symbolism, of course, earns its name for its love of symbols and signs. Gudiashvili, too, loved symbols: it is not hard to notice that almost all his paintings and magnificent drawings — Gudiashvili drew wonderfully — have, as a rule, an image of a doe in an elegant, sweeping motion. Even his horses, when they need to appear according to the story, look more like graceful does rather than, for instance, carriage horses (as in the drawing from the Tretyakov Gallery’s collection “Moscow Street with Coachmen”). The image of a doe is like a sign, Gudiashvili’s painterly signature.

Time has scattered Gudiashvili’s Parisian heritage over various cities and countries. Some of the works that he brought with him to Tbilisi ended up in museums and private collections in Georgia; he left other works with his friends in Paris in the hope of picking them up during his next visit to France. But this visit was never to happen. Lado’s Parisian friends kept his paintings and drawings for a long time; afterwards, the works scattered throughout the world.

Twelve years ago, Iveta and Tamaz Manasherov, Tbilisi-born Muscovites, decided to find and collect everything (or almost everything) that survived from Gudiashvili’s Parisian heritage. The young collectors successfully accomplished this task. The Tretyakov exhibition features more than 50 of Gudiashvili’s paintings and drawings owned by the Manasherovs. These works, created by Gudiashvili between 1919 and 1929, are mostly from his Parisian period, though some are from his pre-Parisian and first post-Parisian years. In addition, six wonderful Gudiashvili drawings from the same period were found in the Tretyakov Gallery’s collection. All of these works have become part of the exhibition, and the Moscow audience has greeted them with great interest and attention. 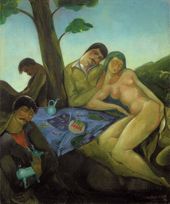 Drinking-bout under the Tree (Drinking-bout with a Woman). 1923
Oil on canvas. 57 × 47.5 cm. Iveta and Tamaz Manasherov's collection 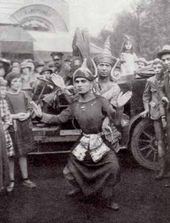 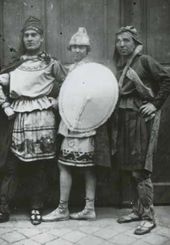 In the Waves of Tskhenis-tskali. 1925
Oil on canvas. 72 × 91 cm. Iveta and Tamaz Manasherov's collection 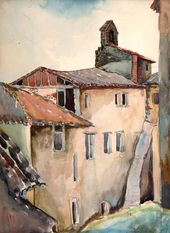 The House in the Village Bruniquel. 1924
Watercolour on paper. 35 × 26 cm. Iveta and Tamaz Manasherov's collection 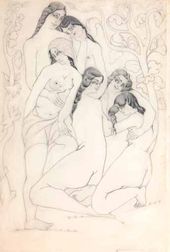 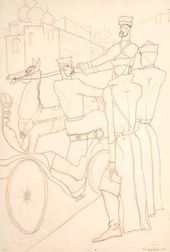 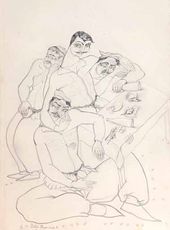