From 23 October 2009 to 14 February 2010 the Palazzo delle Esposizioni (Rome) will present over 160 works by Alexander Calder, including mobiles, stabiles, monumental sculpture, oil and gouache paintings, bronze, wire and wood sculptures and jewelry in an exhibition curated by Alexander S.C. Rower, President of the Calder Foundation.

Alexander Calder (1898-1976), one of the world’s most accomplished and beloved artists, transformed the history of art with his use of unconventional materials and his dramatic re-imagining of space. Calder is famous for his invention of the mobile, but his relentless innovation and strong creative vision extended beyond the lines of an established genre in art. By using the ideal beauty of abstract forms and integrating subliminal properties such as gravity, equilibrium, and negative space, Calder’s sculptures create a new experience of object and environment. The exhibition at the Palazzo delle Esposizioni is an invitation to take part in this visceral experience, to go deeply into the artist’s unique mastery of energy and space.

Calder grew up in a family of artists; his father and grandfather were both successful sculptors and his mother was a painter. Despite his artistic talent, Calder first studied and worked in mechanical engineering. In 1923, he settled in New York and began to study painting and drawing at the Art Students League.

In the summer of 1926, Calder moved to Paris, the centre of the art world and home to a vibrant community of avant-garde artists, such as Duchamp, Leger, Miro and Mondrian. Calder’s initial venture into pure abstraction occurred in 1930, when he created a small series of non-objective oil paintings, five of which are presented in the exhibition.

Intrigued by the idea of abstract forms able to occupy various positions in space, Calder used motors and cranks to create works that could perform two or three cycled motions. Marcel Duchamp suggested that Calder call his new objects "mobiles." After seeing the mobiles, Jean Arp wryly suggested that Calder call his static constructions "stabiles"and Calder immediately adopted the word.
Some of the most recognizable of the artist’s work were his monumental sculptures, installed in public parks and plazas all over the world.

At the Villa Borghese before Antonio Canova's Paolina Borghese, I was awestruck by the sculptor's ability to realistically create not only the figure but also the divan out of marble, to make what is hard appear soft, true, and yielding. In the stone, worked with such delicacy, combining the real and ideal, Canova pushed the medium to the final degree, to the limit of its potential. Likewise, my grandfather Alexander Calder pushed wire and sheet metal to the limit.

He transformed these common industrial materials into unpredictable and often mysterious works of art that project the naturalistic energy inherent in living beings. By integrating subliminal properties such as gravity, equilibrium, and negative space, Calder’s sculpture creates a new experience of object and environment. This exhibition is an invitation to take part in this visceral experience, to go deeply into my grandfather’s unique mastery of energy and space.

Calder began addressing the problem of three dimensions with figurative sculptures made entirely out of wire in the 1920s. Finding a new use for this otherwise utilitarian material, he defined mass by suggesting its volume in a few lines of wire. The two portraits on display in this exhibition, Portrait of a Chinese Man (1928) and Untitled (c. 1929), demonstrate Calder's talent for capturing the gestural vitality of these figures with wire delineations. Of course his most impressive wire sculpture (presented here thanks to the generosity of the Guggenheim Museum) is the monumental Romulus and Remus (1928). At nearly eleven feet long, Calder's spirited depiction of the founders of Rome is also at a pinnacle of his artistic evolution in wire.

My grandfather initially pushed past the figure and ventured into pure abstraction in October 1930, when he created a small series of nonobjective oil paintings. These works are Calder's exploration of the interaction of energetic forces and weights in a composition. He quickly shifted from these experiments to mutable objects in three dimensions. The earliest nonobjective sculptures, such as Small Feathers (1931) and Croisiere (1931), form a kind of classical abstraction, in that they are composed of refined lines and a stark palette that explore definitions of pure energy.

Calder's transition from figuration to abstraction inspired a burst of creativity that would culminate in his invention of the mobile, a radically new art form. As Jean-Paul Sartre wrote, “A ‘mobile’ does not ‘suggest’ anything: it captures genuine living movements and shapes them... They feed on air, they breathe, they borrow life from the vague life of the atmosphere.”[1]

Presented in this exhibition is Small Sphere and Heavy Sphere of 1932, exhibited in 1933 and not again until only last year.[2] The very first mobile designed to be suspended from the ceiling, Small Sphere and Heavy Sphere marks a dramatic turning point in my grandfather's development. It is the epochal synthesis of his intellect and intuitions on motion, intervention, variable composition, performance, and chance. Calder took objects discarded in the course of everyday life — empty wine bottles, a tin can, a wooden box, etc. and re-employed them as impedimenta, or items that may be struck by the small wooden sphere when the mobile is set in motion. Additionally, Calder left the arrangement of these objects undetermined; he intended that the viewer freely organize and reorganize them himself. These interventions remove the artist’s control over the final composition. When one activates the heavy iron sphere with a gentle push, the small wood sphere is propelled on a grand tour, instigating a series of collisions with the impedimenta. Through the small sphere’s movement, a random composition of tonalities is created, so the mobile engages the visual sense and more importantly surprises the aural one with an open form musical experience.

The inherent unpredictability of the arrangement of Small Sphere and Heavy Sphere leads to an unsettling feeling of anticipation that builds and releases as the small sphere travels an unpatterned course, variously missing and hitting the disparate objects. But it is not the mobile itself that controls the composition, rather it is a multitude of forces harnessed by the artist but acting with unfettered freedom that are accelerated upon the viewers intervention. In 1933, Calder wrote, “Just as one can compose colors, or forms, so one can compose motions.”[3] Small Sphere and Heavy Sphere presents a composition of motion, an unfolding event that engages the viewer to respond presently. Seen in reference to other works from the same period, such as Object with Red Ball (1931) and Untitled (c. 1932) it is particularly striking to see the concatenation in the mobile’s early evolution.

Later in the 1930s, Calder addressed the frontal formality of painting, yet rendered in three dimensions, and with the introduction of motion. In these abstractions such as White Panel (1936), which can be seen in context with Red Panel (c. 1938), a never before exhibited mobile construction, one gains a deeper experience of the peculiar performative nature of these works. “The various objects of the universe may be constant at times,” wrote Calder, “but their reciprocal relationships always vary. There are environments that appear to remain fixed whilst there are small occurrences that take place at a great speed across them ...It is a matter of harmonizing these movements, thus arriving at a new possibility for beauty.”[4] With a composition that combines these fixed environments and small occurrences, the panels blur the line between painting and sculpture, between two and three dimensions. My grandfather used the variable composition of changing foreground against static background to create a performance, as these paintings in motion act out a spatial drama with a cast of abstract objects.

In the 1940s, Calder's masterpieces, like The Spider (1940), and Little Spider (c. 1940), demonstrate his ability to make striking objects that are overpoweringly themselves, while still managing to suggest issues of the natural world. Evoking the contrast between the rustle of delicate leaves and stasis in the trunk, Tree (1941), combines a fragile found object mobile with an imposing eight-foot black stabile. Not exhibited since Calder's retrospective at the Museum of Modern Art in 1943, Tree is a harmonization of opposing energies. And then there are works that conjure up a naturalness that is all their own. Scarlet Digitals, last exhibited in 1945, the year of its creation, unites four disparate ensembles of movement that compose a resultant whole in one equilibrial construction.

My grandfather always worked towards a purified form of idealized beauty, and this intention was communicated through the reality of the viewer’s inspiring personal experience. When engaged, his works communicate his subliminal dictates; sensory statements emanate from the compositions. It is this primary interaction with his sculpture in present time that makes Calder’s work continually fresh and alive to contemporary audiences. I hope that this exhibition provides the opportunity to see and experience my grandfather’s work in an exciting and compelling way, as a source of inspiration that imparts a lasting sense of the sublime.

The Editorial Board of the Tretyakov Gallery magazine express their gratitude to the Press Office of the Palazzo delle Esposizioni for assistance and co-operation in the preparation of this article. 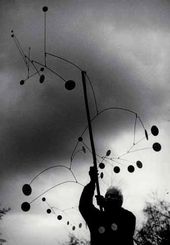 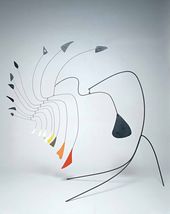 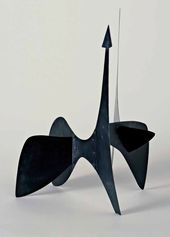 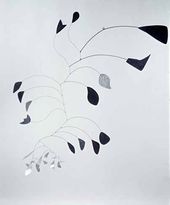