For many Zurab Tsereteli is a unique individual, and the only such one among the people I know - at least among those who play an important role in modern art and modern life.

We are living now through a time of anxiety. The world has lost its sure footing, people have lost faith in the old values and, as it seems, in themselves as well - they can no longer get along without technical “crutches”. Lack of confidence in the future, and a panicked anticipation of forthcoming cataclysms dominate, coupled with a fear of failing to keep up with fashions, missing something, receiving less than one is due... The older generation is afraid of being labeled as retrograde. Life - what a frightening thing...

Zurab Tsereteli is an individual who is afraid of nothing. He goes his own way, doing what he deems necessary, checking his bearings against his conscience alone, without fearing personal attacks, lies and insinuations — and there have been quite a few of them in recent years. He is unafraid of being completely himself — a true Georgian with a passionate Southern temperament who faithfully loves his native Georgia with its breathtaking landscapes and ancient history; with its heart-piercing polyphonic singing and superb professional art; its long-suffering people whose troubles and tragedies he and his family had to share.

He openly talks about his devotion to the great painters — Picasso, Matisse, Van Gogh, Modigliani. Others arrogantly claim that the art of painting is dead, or that they can replace live brushwork with coloured computer-generated prints “a la painting” — many art stores, exhibitions and galleries are now overflowing with this kind of computer-made “pseudo-paintings”. No matter how busy his day, first thing in the morning Tsereteli hurries to his studio, to his easel to paint a still-life, a bunch of flowers, a portrait; he paints with passion, relishing the colour and the texture of paints, which are as inimitable as nature itself. He paints non-stop, every minute and everywhere — at a meeting of the Academy’s presidium, or at a governmental conference.

His bright personality does not fit within the limits of the present — I can easily imagine Tsereteli among the PostImpressionists, Cubists, or Futurists of the early 20th century. Those young iconoclasts were breaking old stereotypes; among them were artists with a superb academic training and restless drive for the new who were creating their world — unusual and reformed... Tsereteli’s main characteristic, his most valuable trait is the need, typical for innovators, to create, to vigorously engage in doing and making with all the passion of his enthusiastic insatiable spirit. As his brothers- and sisters-in-arms at the Russian Academy of Fine Art, we admire, and sometimes, at the bottom of our hearts, feel a sharp envy for his tireless energy.

And there is also another valuable trait to Tsereteli — a generosity of spirit, and the ability to share with all those who need it his energies, time, all of himself and, in the first place, his art, his consummate craftsmanship.

Nowadays the self-styled “academies” and “schools” promise to teach art, for a considerable sum of money, in two hours to anyone who applies. Better than anyone else Tsereteli knows the value of true craftsmanship; he knows how much tireless hard work goes into the making of true art — and he still find slots in his busy schedule to teach, without remuneration, master classes to children and young artists at the museum on Prechistenka Street. He requires from art students an excellent knowledge of the media and a solid professionalism, and while he appears to have achieved everything a great artist can aspire to, he continues to study new techniques of casting and enamel, mosaic, and tapestry making; he continues to experiment and share his discoveries with the young, his colleagues, and viewers.

Are there many such people today? How many of our “new Russians” follow the traditions of art patronage and philanthropy as unfailingly as Tsereteli does, how many donate considerable sums for good deeds and for people’s welfare? Hardly very many. Tsereteli is setting up in Moscow a fourth museum already, while donating to the Moscow Museum of Modern Art on Petrovka Street some great masters’ works from his private collection; he organizes the most interesting exhibitions and arranges, for the museums of Vologda and New Jerusalem, Russian and international gallery owners, and scores of old and young artists working in the most diverse schools, opportunities to exhibit their collections.

Becoming a recipient of Tsereteli’s help is easy; sometimes his help even goes unnoticed and under-appreciated. It seems that he is the one to rejoice the most at the chance to support someone, to help someone, to bring pleasure, to make a feast for his colleagues.

Always very sincere, Tsereteli’s art is as generous as the artist himself. Perhaps more than half of his works were created without a commission, solely for his own pleasure. No, not “for his own pleasure” alone... Yes, responding to the stirrings of his soul, but by no means for the sake of an egoistic self-actualization, not just to “express oneself”. The definition of the goal and essence of art as solely the artist’s ability to “express oneself”, fashionable in the 20th century, has no relation whatsoever to Tsereteli. Yes, his art is individualized and highly personal, but all of it is addressed to people, appeals to them, sometimes literally screaming as does the monument dedicated to the struggle against AIDS: “People, wake up! Stop the 21-century plague!” His art mourns the American 9/11 tragedy, weeping over the victims; it arduously and strenuously reflects on history bringing into our “today” the great people of the past, adding to the roster of our contemporaries Peter the Great, and the founder of the Academy of Arts Count Shuvalov, Anna Akhmatova and Joseph Brodsky... He wastes no time in perpetuating the images of those who until recently were key figures of our time and whose loss has been felt so keenly, like Mstislav Rostropovich or Pope John Paul II.

Tsereteli’s art has a strong childish touch, a dash of naivete and simple-mindedness: this streak often manifests itself either in the moving and funny image of a Georgian artisan or in the image of circus clowns jumping over one another, an amicable animal or a bird soaring into the sky. Tsereteli’s creations feel like they do not have enough space in the studio or in the Prechistenka Museum — every now and then they burst into the street, eager to join the company of people. Tsereteli cannot imagine himself without the company of others, he cannot live without constantly giving of himself — it is as if he overflows with an ebullient creative energy which simply cannot be limited.

One often wonders: What drives him to expend so much of himself, to devote so much energy, say, to the Academy of Arts or the museums, to care so much about art education and the state of the academic institutions and schools, about the future of young artists? For he personally has it all: worldwide fame, the option to quietly live his own life enjoying every comfort one can think of! Well, such “quietude” and “comfort” are obviously alien to him.

From where then does the master, who marked his 7 5th birthday this year, draw this inexhaustible energy, how does he manage to preserve the youthful traits of his character — the daring, recalcitrance, lack of concern for what people may say about him or what these or those “circles” think of his work? From where comes the energy to travel all across the world, to wage tiresome “battles” with different high-placed bureaucrats, to jump through hoops in arranging exhibitions and teaching master classes?

A Christian since his young years, Tsereteli is imbued with Christianity on an intuitive level, down to the very bottom of his heart, and he serves Christ zealously, selflessly — with all he has at his disposal. With his art he serves Christ in the same way as did the old Georgian icon painters and book miniature painters. For him the devotional art of long past centuries is an eternal wellspring while he actualizes the old traditions in his artwork through novel, unusual media — as in the technique of embossed enamel, of his own invention, in the bronze relief icons of the St. George Church at the Poklonnaya Hill memorial complex.

Like a child, he fully senses the magnitude of the Bible and the Old and New Testaments and conveys this sensation through his biblical pieces — huge reliefs and colossal statues. The figures, well above human height, seem to reach out to him from those times when Methuselah had several centuries to live, and the giant Goliath had his head grazing the sky, and King Solomon, the sage and builder, had 2,000 concubines. Did this ever happen? Tsereteli convinces us: Yes, it did and it does now — everything associated with God is significant and beautiful, and everything that passes leaves a trace. Rejoicing at the works of God and serving God the Creator through creative work and the effort of making and doing — that is the life philosophy of Zurab Tsereteli, a great artist and grand individual. 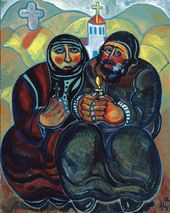 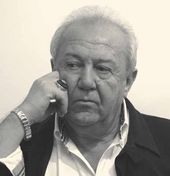 Zurab Tsereteli in his studio. 2008 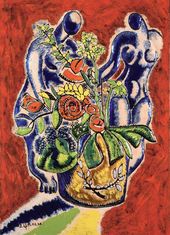 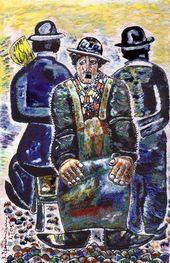 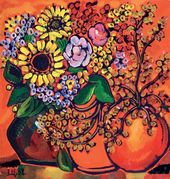 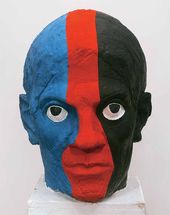