Sometimes it seems that the terrain of modern art fans out in so many directions that it is almost impossible to have a dialogue on the subject. The capacity to listen and the possibility of being heard have become quite rare.

Pierre Cardin and Alexander Burganov, two outstanding artists whose art is so very different, have managed to find such a common ground for dialogue. Their artistic friendship started several years ago and resulted in a number of unique projects that made a splash in both France and in Russia. The dialogue started with a small sculpture by Alexander Burganov, “The Greeting”, which was presented at the exhibition in Paris. This work of art immediately attracted Pierre Cardin’s attention and marked the beginning of the two artists’ joint artistic projects. The first one was launched in 2007 in the quarry of Lacoste and the chateau of the Marquis de Sade. This place, located near Avignon, is world famous not only because of its historic architecture, but also because of the theatre festival that takes place there.

The festival’s slogan is “To discover new talents, and invite those who have already reached the heights of their art”. The festival’s major event was the exhibition of monumental art of Alexander Burganov, designed by Pierre Cardin, whose unique and absolutely special vision of space and shape helped present the sculptures from the most emotional vantage point. The myth of the place, both tragic and lyrical, gave the theme its name: “Eros and Thanatos”. The themes of love and death are here in every work of art. Presented by Alexander Burganov on a monumental scale, they acquired epic proportions. The arms, open for embrace, for a moment become the prostrate arms of the crucified Christ, as if saying: “He wanted to embrace us all, but we crucified Him so that this embrace lasts forever.” An elegant woman’s shoe ends up as the horrific grin of a skull, connecting the flying gait of Love with Death’s heavy steps. A cage with a fine feminine outline imprisons a restless soul inside. Among symbolic compositions there are portraits of Rudolf Nureyev and Marc Chagall — key figures in the cultural dialogue between Russia and France.

The exhibition brought together about 30 pieces, each of them perceived as a poignant poetic and dramatic phenomenon, embodied in a plastic form. The success of the exhibition — which lasted for the whole year instead of a month, as had been originally announced — made it clear that the Cardin-Burganov project would continue. The exhibition included a number of new works, and was moved to Paris at Pierre Cardin’s suggestion.

It opened on March 11 2008 at several sites simultaneously — on the Champs-Elysees near the Place de la Concorde, at the Cardin Theatre and at Residence Maxim’s de Paris. The exhibition was called “Columns and Clouds” and sophisticated Parisians were struck not only by the works themselves, but by the unique form of their presentation. Many sculptures, executed in white composite material, were elevated high above the ground and seemed to be floating against the rows of black mighty tree trunks and the blossoming greenery of the Champs-Elysees. Alexander Burganov’s small bronze compositions offered a contrast to the monumental forms. The general stylistic direction of the pieces may be characterized as “magical realism”, which has roots in early surrealism, but has a notable place of its own in the art of the 20th and 21st centuries. All of the images, expressed in Alexander Burganov’s unique plastic language, won immediate recognition.

At the same time, the Moscow-Paris Exhibition opened in the Moscow State Museum “Dom Burganova” (Burganov’s House) on the Arbat. The exhibit showcased the art of both Burganov and Cardin. Here Alexander Burganov offered his version of the exhibition. Inclined towards monumental forms of expression, he presented photos of Cardin’s work on a grandiose scale by creating unique collages and installations.

The Lacoste exhibition of monumental work, which began so auspiciously in 2007, continued with success in the summer of 2008. The monument to the Marquis de Sade was a new result of Alexander Burganov and Pierre Cardin’s creative cooperation. Cardin was the architect and designer of the installation, while Burganov was the sculptor. The monument stands out for its unique composition and virtuoso plastic execution. The portrait of the Marquis de Sade, the philosopher and man of letters, is enclosed in a cage. This metaphor reflects public opinion and fiction, which turned his surname and its derivatives into common terms. In this lies the reflection of the historic episodes of his biography — the disgraced Marquis spent 30 years of his life in prison, where he created his works in solitude. The speakers at the exhibition’s opening pointed out that this poignant monument was one of the best recent works in France. Alexander Burganov managed to reflect a writer’s genius and insanity, an aristocrat’s bravado, and the impotence of a slandered person.

The new exhibition of Alexander Burganov’s works opened in time to coincide with the unveiling of the monument to the Marquis de Sade in Lacoste. This time Burganov’s graphic works were the centrepiece of the exhibition. The works were enlarged to a grandiose size and erected along the perimeter of a small lake, in the centre of which the sculptures were installed. It turned out to be an utterly unique architectural space, where the smooth surface of water replaced the hardwood of the floor of an exhibition hall, and the graphic sheets became its walls. The surrealistic nature of the space was apparent: a floor that may not be walked upon, walls that just surround the environment without restraining it, the sky instead of a roof. All this made the exhibition a universe unto itself.

The dialogue of the two artists continued in Moscow in November 2008, when Pierre Cardin arrived at the Moscow State Museum “Dom Burganova”. The museum held a large exhibition of Cardin’s creative projects — architecture, designs for environmental spaces, airplanes, costumes, and furniture. Pierre Cardin was very impressed with the architecture of the museum, created by Alexander Burganov, and, of course, his sculptures, those which he had not seen before. “I am very proud to be Burganov’s friend,” wrote Cardin. “I am astounded and impressed by his work.” These words from the great artist are the best evaluation of the creative work of the famous Russian sculptor Alexander Burganov. 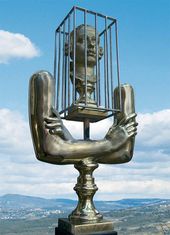 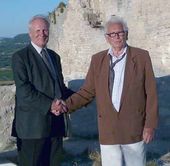 Alexander Burganov and Pierre Cardin at the opening ceremony of the Monument to the Marquis de Sade in Lacoste, July 18 2008 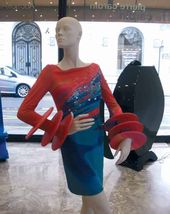 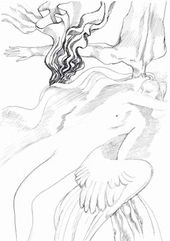 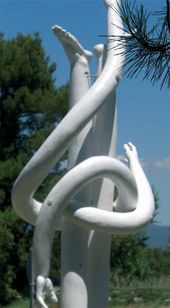