A first-time viewer, looking at recent works by the Moscow artist Olga Bulgakova, would barely imagine what she made at the beginning of her creative career. In retrospect, it becomes obvious how consistently and inherently logically her overall comprehension, perception and understanding of the essence of being have evolved.

In her paintings of 2007 Bulgakova looks into the distant past of humankind, into the genesis of things. The artist has used pre-archaic and archaic subjects for a distinct, image-based conceptualization of her individual attitude to spiritual values and, of course, to discover new artistic possibilities for tackling this goal. Such works as "Adam”, "Eve”, and "The Return of the Prodigal Son” appeal to viewers not only within the context of the biblical mythology adapted by the artist in line with contemporary mentality, but also on the purely aesthetic, artistic plane. The forefather and foremother of humankind, who ate the forbidden fruit from the tree of knowledge of Good and Evil, were expelled from Eden. This event became a divine forewarning, a symbol of the fall from grace; this is why Adam and Eve, stirring the imagination from time immemorial, have been ubiquitous mythical figures for centuries, featured, as if by an unwritten rule, in the cultures of different epochs and nations. Adam and Eve marked the boundary between Good and Evil and, as for the distance from sin to repentance, it is for everyone to verify it for him or herself.

It is clear that immediately after "Adam” and "Eve” Bulgakova creates several versions of the "The Return of the Prodigal Son,” in her pursuit of the most sensual, dramatic style for a figurative evocation of the eternal subject. Since she achieves this instinctively, through her imaginative insight, her works are appealing for their spiritual energy and magnetism. In her own vein, in accordance with her moral principles and beliefs, Bulgakova treats the Old Testament subjects as a philosopher; she finds an individual system of their pictorial transformation through the semantics of form and colour, which, for her, could be identified with the etymology of words. In one instance Bulgakova changes the traditional formats of the plain surface of a painting, creating a multiple-layer contour of space; in another she returns to the classic rectangle. The paints on the canvas acquire an unfathomable material substance in the complexly nuanced gradations from the deep red, vermilion and ochre to the infinite hues of the saturated black. She paints with a palette-knife, which lends the necessary dynamics to the surface of the paintings and creates the illusion that the texture of colour gives off sounds.

Before her latest projects Olga Bulgakova worked on a series of paintings called "Matriarchate” - a fact that speaks for a kind of a single-mindedness and consistency of the evolution and refinement of the figurative dramaturgy of her art. Each painting of this series has a significance of its own, possesses a distinct emotional, psychological and substantive meaning. At the same time, one painting seems to expand our understanding of one another; the changes in the positions of women's figures and in the colour intensity of the space convey the array of different sensual states of the composite compound image - not the image of a specific time period in society's history, but the symbol of the genesis of things, a gynocracy that underlies the process of the self-perpetuation of humankind. The universality of the plastic forms, the amplitude of fleeting colours, the intensity of colour lend to the women's lone figures, which fill and dominate the space of the paintings, a stunning monumentality both in form and substance. They are both archaic and modern, metaphorical and concrete; their forms are tangible, even sculpture-like.

Prior to "Matriarchate,” in 2006 Bulgakova worked on probably her largest series of paintings, called "Nomini” (Imena) - this series is a milestone in treatment of the Biblical images and the Old Testament precepts, in its re-thinking of the past and the present, and in departure from purely theoretical and idealistic perception of the realities of our life.

It was this very series of Bulgakova's paintings that brought into sharpest relief the artist's desire to develop an individual system of the semantics of colour, which, as the author feels it, can be identical to an etymology of words, to semiotics. The forefathers' and prophets' names on which Bulgakova based her pictorial experiments reflect the hierarchy between the eternal and the earthborn. Any name given to this or that person is, in a sense, fateful and significant.

For Bulgakova a name, an embodiment of the cosmic sense, becomes a carrier of the essence of the individual on whom God bestowed it. Maybe this is the reason why, painting a face, the artist nearly always inscribes it into an egg-shaped oval or circle, which, in its turn, is a universal symbol of life, of the genesis of things. In the artist's paintings they are like pendulums of eternal, unreal time - Time of Eternity and Irreality. By using a palette-knife, the artist succeeds in rendering inner movements of colours and texture. Faces-names either transpire as bas-reliefs on the canvas or turn into masses of kinetic energy. And here her art acquires monumentality, some special dramatic intensity bringing symbolic depth to the depicted images.

Not unexpectedly, this new period in Bulgakova's art was preceded by a complete departure from figurativism and by an emancipation of consciousness, which made the artist turn to the experience of abstractionism and suprematism, to the legacy of the classical avant-garde, to the art of Kasimir Malevich, Piet Mondrian and Mark Rothko. Having re-evaluated the previous experience alongside the transformations of the traditions of non-figurative painting in the late 1990s, it became for Olga Bulgakova an important phase of self-development, resulting in transition to a new quality of artistic mentality. And prior to that, she was going through a protracted period of accumulation, advancing gradually, from the early metaphorical works redolent of the romanticism of playful carnivalesque culture to the works whose style was more reminiscent of a metaphysical system of colour and form arrangements.

In the mid-1990s, having summed up her previous experience of working on genre paintings marked with sensitivity, creative imagination, erudition and accomplished professionalism, Bulgakova grew more and more attracted to the formal aesthetics of pure art essentially void of socio-historical subtext. Her paintings of that period are distinguished by metaphysical remoteness and lyrical mysteriousness. She painted women in crinolines, with fans and playing cards, with still-lifes; they are like apparitions who entice and cast a charm on the viewer. Refinement of the colour combinations, the quiescence of the frontally positioned fictitious characters lend to the painter's works idyllic inflections of nostalgia, which stir up in our consciousness an array of ambiguous associations.

And before then there was the longest period in the creative activity of the artist - it was when she made her first steps in art, when she was formed as an artist developing into a bright and selfsufficient creative personality. In one of her earliest pieces she, very young back then, represented herself with her husband, Alexander Sitnikov, a fine Moscow artist. The painting called "Young Artists” renders with a deep and sincere emotion the feeling of romantic attraction so typical for youth, the expectation of the serene future, the belief in the guiding star which, for them, was and is Art. The piece, showing a love for detail, conveys a sense of space, light and air. Today "Young Artists” seems a symbol of loyalty and a dream about the future; broadly due to the poetic inflections of the narrative, it also evokes certain literary associations. However, the idyllic, lyrical overtones were soon to give way to a different dramaturgy. The 1970s in Russian culture were a period of conflicts and contradictions. The idealism of youth confronted the realities of everyday life, political intrigue, and ideological restrictions. The young generation was forced to use an Aesopian language, a language of allegory and metaphor. This practice became firmly entrenched in the consciousness of individuals and society. But a truly gifted person would open up in any conditions, against all the odds. The talent of Olga Bulgakova is very special - she is like no one else; though it should be noted that at that time the art of this superb master was characterized by the features and qualities that were typical for many deserving, original young artists. Bulgakova's works are distinguished by an astonishing sense of moral involvement with the historical destiny of our culture, with the people who were the carriers of this never-dying spirituality, with the heirs to these great traditions - her contemporaries. This was the source that brought a kind of special enhancement of the image-based dramaturgy of the artist's works. The pieces she created in the 1970s have an emphatically theatrical character. Any play Bulgakova happened to see at her favorite theatre, the Sovremennik, could be transformed by her brush into an allegorical picture of the time.

Bulgakova also created paintings with abstract subjects, featuring fictional, semi-fantastic characters free of the paraphernalia of our everyday reality - this applies to such works as "Performance”, "Conjurer and Clown”, and "Feast Meal under the Moon”. These paintings were the first to demonstrate the allegorical and metaphorical dimension that distinguishes Olga Bulgakova, defining an original, new trend in Russian art for many years to come.

Within the same period she created paintings dedicated to Nikolai Gogol and Alexander Pushkin: her imagination conceived composite, dramatic images of the geniuses of Russian culture. The paintings are free from everyday pedestrianism and plain descriptiveness, because Bulgakova is amazingly selective when creating content-rich, multi-evocative narratives suited for her concept - this also demonstrates her delicate and upstanding sense of history. In terms of colour and form, composition and emotional content these works make the viewer experience the tragic paradox of the fate of the genius whose art, timeless and universal, already has a life of its own, emancipated from its creator.

Thus, analyzing the different periods of Olga Bulgakova's creative activity, one grows certain that her devotion to the Old Testament subjects and the eternal spiritual values has become for the artist a deeply-felt need. Having reached the heights of professional culture long ago, she assimilated the universal idea of Good and Evil, Beauty and Harmony not in its outward manifestations, but at the high philosophical level of awareness of the divine humanistic nature of the universe.

The latest expressionist works of the painter, including the recently-begun series titled "Angels”, prove that Bulgakova has developed a new image-based universal style and made a transition from a language of allegory and metaphor to an art of parables and precepts, to a modern artistic treatment of the eternal truths at a different sensual and intellectual level. 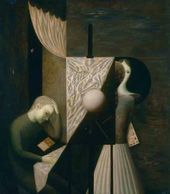 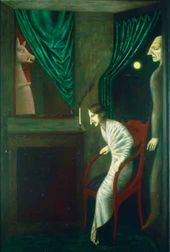