Stylistically, most works by modern artists may be described with reference to a certain school - it could be classicism, or post-impressionism, or even some of the “trends” ... Dmitry Zhilinsky’s works are an exception: they are truly unique and cannot be identified with any of the known schools. There is no other artist working in the same manner as Zhilinsky.

He is a brilliant artist. An ideally precise drawing technique imbues his works with a scent of classicism and the highest degree of professionalism reminiscent of the "Old Masters”. Zhilinsky’s works are also distinguished by their exceptional resemblance to real persons and scenery. This factor is almost frightening regardless of whether the works depict the artist's relations, or represent "ceremonial portraits” of the Danish royal family, or portraits of the great musicians ordered by the Moscow House of Music. No less realistic are his larger paintings reproducing such tragic scenes as the arrest of the artist's father or the funeral of his beloved wife, Nina Zhilinskaya. Characters of his "Biblical Themes” - "The Last Supper”, "Calvary”, the rescue of the baby Moses by the Egyptian princess - also appear to be drawn from nature.

Yet, Zhilinsky's "realism” cannot be compared with "naturalism”, which indifferently reproduces the bare reality. Zhilinsky's characters possess something much more significant, deep, and their own internal world. They appear real not only in the "physical” sense, but their existence continues beyond that brief moment "between the future and the past”, which is called "a human's life”, into the "afterlife” - the "fourth dimension” where they exist and to which not many are granted access.

His portraits do not give the impression of a mirror-image, of something flat and lifeless. On the contrary, they look like a transparent glass lit from inside, and out of a mysterious beyond, out of nothingness, people appear - those whom we know, and those unknown to us but all of them real and full of life, as if in a dream. Nikolai Chernyshov and his wonderful, selfless Antonina Alexandrovna; Svyatoslav Richter; Zhilinsky's mother and daughter; Nina Zhilinskaya, and the artist's second wife - the charming Venera; his beloved son Kolya; and the artist himself. They all appear so real, even though they do not move or talk. But souls commended to God cannot move and talk. Leaving their eternal abode, they came from a mysterious beyond to follow the artist's call. Some of them left "this life” long ago, and their world has also gone. Such was the destiny of the then young Moscow Arts Theatre with its daring aspirations, and part of the Russian cultural heritage of the turn of the centuries was irretrievably lost. Others are still with us, yet they are also creatures of the past. Those with us today are different, and the past cannot be returned. Just as the artist's dead father and brother forever remain in 1937 and 1941, he as a young man and his little daughter are no longer with us ... At least three quarters of Zhilinsky's art are such memoirs. But they are special memoirs. It is said that on their deathbeds people relive with unusual intensity the most significant moments of their lives. Such recollections resemble a replay of events, once recorded and stored at some "medium” to be later brought back to life.

Zhilinsky's works are such recollections. Amazingly, the artist does not spare himself in turning to the most tragic events of his own life, in scenes of his father's arrest and of Nina's death. Not many an artist would dare painting a selfportrait with a dead pet-dog ... Yet, maybe there is nothing amazing in that at all, as those events had so much significance for the artist and left such a strong impression on him that he could not put them behind him, and brought them back to life in painting. These paintings are pure and reserved, without a trace of affectation. Their serenity recalls Russian icons. In fact, the art of icon painting obviously affected Zhilinsky's works as he used the tempera technique on levkas and preferred painting with pure, natural colours.

There are also paintings which depict events of great significance not only for Russian culture, but for the history of mankind as well. Among them is a large painting done for the Moscow Arts Theatre. The artist captured a real event that took place in 1900, when the theatre toured "The Seagull” and "Uncle Vanya” for Anton Chekhov in the Crimea. On April 24, one of Chekhov's admirers, Fanny Karlovna Tatarinova, gave a farewell dinner to the artists and writers who had visited Yalta. The famous figures of the theatre - Chekhov, Stanislavsky, Chekhov's wife Olga Knipper, as well as Maxim Gorky, Ivan Bunin and other guests - are depicted on the huge flat roof of the building and on the stairways. Just like in his other works, all the characters are easily recognized. Yet here the artist slightly violated historical truth, albeit only once: he included Anton Chekhov's young nephew Misha - the future great actor Mikhail Chekhov - into the "host of the great”. However, this little "distortion” of historical truth appears quite natural, as we are not concentrating on the precise historical moment but are trying to penetrate the time. It seems the curtain was drawn, and the artist for a brief second saw the "contemporary” reality in which Chekhov and the new theatre existed. And all those who represented the great culture of the "Silver Age” at the turn of the 19th and 20th centuries came to greet and honour Anton Chekhov on that long gone day, April 24. They did not disappear into oblivion, as they simply could not disappear. That day "exists” forever, as well as the atmosphere of joy and unity described by Stanislavsky: "I remember those enthusiastic speeches, heated by the Southern sun. They were full of hopes - hopes that never end.” Today that theatre no longer exists, yet it is much more real that the two grotesque "halves”, which strive to claim its great name ...

In a similar manner Zhilinsky depicts "The Last Supper” - it is not a transient moment that once took place on Holy Thursday and was followed by the prayers in the garden of Gethsemane, Christ's arrest, trial and crucifixion. The great mystery of the Last Supper exists now and will last forever, until the end of time, despite the tragedy which followed it. Jesus' arrest, torment and execution are put behind: the painting is already imbued with the spirit of Resurrection. The room - clean, prepared and decorated with carpets - gives the impression of a festive shrine, filled with joy. In a way, it resembles the paintings of Pompeii, with their cheerful spirit of ancient times. Sitting around a low table, the disciples form a garland with their festive costume, like with leaves and flowers. And we share with them the feeling of exultation and are united in the jubilant "Christ is Risen!” "But I shall see you again, and your hearts will be filled with joy, and that joy no one will take from you.” Judas has left - his bent dark shape is seen in the doorway. Yet, neither the disciples, nor the spectators seem to care. He is an expelled outcast; ever since we celebrate that eternal feast, he is forever doomed to wander in the night ...

Today, when art is striving to break through the boundaries of the physical world by all possible means, Zhilinsky transcends these borders easily, effortlessly. He did not have to distort, break or deny even the smallest detail of life around him. He spoke of everyone's immortality; of every moment in a human's life that is to last forever, and of every flower and fruit that will also never die. In human lives, all events and all their years will pass and yet continue forever. This knowledge is inspired by Dmitry Zhilinsky's works. And we are so grateful to the artist for giving us hope - a feeling rarely experienced in our cruel, godless world. 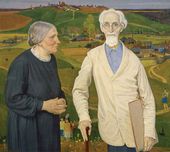 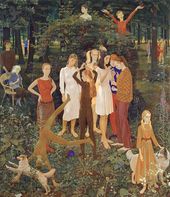 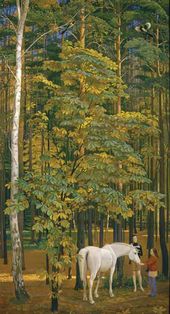 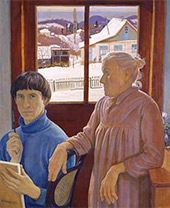 Winter in the South. 1977
Oil and levkas on chipboard. 71 by 60 cm. State Tretyakov Gallery 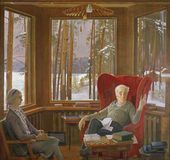 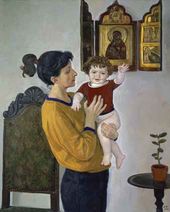