For any Russian artist, no matter how well known, a one-man show at the State Tretyakov Gallery is a very special event. And for the Buryat sculptor Dashi Namdakov, whose numerous exhibitions in the museums and galleries of Russia, America, Europe and Asia have already won him international fame and recognition, the display of his works, sculpture, graphics and jewellery, in one of the Tretyakov’s finest rooms in Lavrushinsky Pereulok, is obviously the most important and responsible moment in his creative life. This exhibition in the country’s main national museum is well-deserved recognition of his art, as well as an assessment of his place and role in the present-day artistic life of Russia and an act of great confidence in the talent and personality of this young artist and the future that lies ahead of him.

There can be few people today who have a clear idea of what is taking place in the artistic life of the vast area east of Lake Baikal, for example. Paradoxical though it may seem, in the last couple of decades the Russian regions have grown further away from the centre culturally than in the nineteen seventies and eighties. And at the same time it has emerged that Irkutsk and Ulan Ude are closer to Beijing than to Moscow.

After the confusion and disorder of the nineteen nineties, at the beginning of the new millennium vast multinational Russia began to witness the emergence of local art centres with their own distinctive features and outside links for the active exchange of exhibitions.

After decades of a policy of levelling out national identity in Buryatia, by the end of the twentieth century a movement had emerged which aimed at reviving national culture, returning to national roots and recognising that the Buryats belong ethnically and culturally to the vast region of Central Asia, which includes Siberia, Buryatia and Mongolia, where bonds of kinship between these neighbouring peoples have been intertwined for many a century.

Historically the roots of the peoples in the Transbaikal area go back into the dim and distant past, the culture of the nomads who roamed over the vast Eurasian plains from northern China and Mongolia to present-day Hungary. disseminating their experience and knowledge of various other peoples as they went. From the moment he was born to the moment he died the nomad was always on the move. And to this day the Buryat retains a sense of being at one with the endless, living steppe and the boundless sky above it, with its spirits and myths.

The mytho-poetical interpretation of the world characteristic of this oriental culture is finding interesting embodiment in Buryat contemporary art: poetry, theatre, and the plastic arts (in 2006 the production of Spirit of Our Ancestors by a theatre collective under D.Badluev was awarded a Russian Federation Presidential prize for design and choreography).

The work of Dashi Namdakov, who hit the headlines suddenly and convincingly for the first time in 2000 at his one-man show in Irkutsk, then in Moscow, St Petersburg, New York, London, Hong Kong and other cities and countries, was a major breakthrough for the young sculptor into the contemporary world art scene.

Dashi had the benefit of a good classical training in sculpture, graduating from the Krasnoyarsk State Art Institute in 1992. His teacher was Academician Lev Golovnitsky, whom the sculptor remembers with immense gratitude. Golovnitsky and other teachers at the Siberian art institute were able to conserve the gifted young sculptor's unique vision and teach him to convey it in plastic language.

Of course, Dashi Namdakov stands out primarily for his talent and intuition. Yet he is also a focal point subjectively and objectively for the most varied phenomena and features of the culture of the new age. Namdakov's work is without doubt a phenomenon of the twenty-first century. It could not have appeared fifteen or twenty years earlier Neither the culture of Buryatia nor public taste was ready for it. Dashi was born at just the right time. In analysing and trying to understand the Dashi phenomenon one must proceed from the parameters of the new age. An age of the free manifestation of the artist's individuality interlaced with the specific culture of the region. The expanses of Buryatia are on both sides of Lake Baikal and since time immemorial it has united the north with traditions of the palaeo-asiatic peoples, the south bordering on Mongolia and China, the Russian territory of Siberia to the west and the equally boundless Far East. For the peoples of these territories traditional everyday life is closely intertwined with religion, and in recent decades, through the language of professional art, they have introduced the world to their rich treasury of spiritual values.

It is both interesting and productive to examine Namdakov's art, which combines the oriental culture of the Baikal region with the achievements of European art, in the context of twenty-first century culture, turning it round slowly like a crystal, as it were, to highlight its different facets and intersections. We see that a process of reciprocal influence is taking place, the set of images is expanding, new forms are appearing and the previously inaccessible culture of the East is coming closer to us.

As a phenomenon of contemporary culture his work appears as something voluminous, extending far beyond the limits of the national and reacting sensitively and objectively to the keen interest in the East, oriental art and the disturbing and enchanting spiritual world so unfamiliar to the Western mind. On a broad, methodological level, that is, in response to the demands of the age. Without dwelling on the reasons for this interest, it is worth noting the universal (thanks to television and the web) expansion of the visual picture of the world, the intense interest in everything new, unusual and, which is perfectly understandable, the growth of esoteric moods in society.

The attraction of Dashi's art for people in different countries can also be explained by the widespread interest in Buddhism. The strong interest in Buddhism these days is no accident. Buddhist mythology is one of the richest and most varied in the history of world culture. Its ability to expand and enrich itself systematically has made it one of the most widespread mythologies in the world.

There is today a growing interest in mythology as a great heritage of human civilisation and an integral part of contemporary cultural baggage. Mythological images are increasingly being perceived in the sphere of high culture as perfectly permissible ways of understanding the world.

A special phenomenon has arisen in contemporary culture, fantasy, which has become very widespread and popular, first in literature, then in cinema and television. The founder of this movement, the English writer and philologist J. Tolkien, whose books create a complex, imaginary world, attractive and enchanting in its reality, was an authority on Celtic mythology, Irish sagas and Welsh legends.

Buddhist mythology can clearly be a profound, inexhaustible source of such creativity. Dashi Namdakov's work can be seen as something similar and akin to fantasy, as the expression of these tendencies in plastic form.

In examining the work of the Buryat sculptor we must mention the strong sense of time in it. His imaginary world is the visual embodiment of a special feeling for the world, which retains the profound endlessness of being as a present-day reality, where cultures and events of the past do not disappear without trace, but continue at the same time as others to be present, to interact, and to keep their significance.

In this connection it is interesting to compare this oriental understanding of the world with the changes in views on the history of culture that took place in Western scholarship from the nineteenth to the twentieth century. The concept of history as linear, uninterrupted development was replaced in the second half of the twentieth century, particularly towards the end, by that of the simultaneous coexistence of different cultural layers. In this case the history of culture is not the consecutive change of epochs, but their visible inter-relationship.

A convincing illustration of this approach is the exhibition project The Universe of the Nomad by Dashi Namdakov's creative workshop, which was on display in 2004 in the State Museum of Oriental Art in Moscow, in 2007 in the splendid new Millenium Museum in Beijing, and then also in 2007 at several leading museums in large Chinese cities.

In the well designed and organised space of the Millenium central hall a large collection of Dashi Namdakov's works was exhibited together with some unique archaeological objects and ethnographic monuments of Central Asia, southern Siberia and the Baikal area from museums and research centres in Buryatia, Irkustsk and private collections. Namdakov's works, a large graphic panel, a dynamic bronze sculpture and some decorative animalistic jewellery, as the embodiment of the spiritual memory, symbols and traditions of the past, coexisted organically in the same context as monuments of material culture, namely, swords and gold ornaments of Hun and Turkic horsemen, ritual objects and attributes of the Shaman cult, true bearers of historical symbols, creating a living image of the nomadic Eurasian civilisation.

China's artistic and university community received Dashi Namdakov with great appreciation and even gratitude as an artist who has managed through the strength of his talent to resurrect their common past and present it in all its beauty and power as a living component of contemporary Eastern culture.

Like the tectonic movements of continents, the powerful processes taking place in the twenty-first century in the economic, political and cultural life of countries in the East have a truly plane tary nature. And if we want to live in peace, in a united multinational Russia, we must be "curious and not lazy”. We must know the culture of our own country and seek to understand the art of the peoples who live together in one large home.

Dashi Namdakov is a profound and sensitive artist, with a broad, modern mind, who creates his images in a plastic language we can understand and gives us the rare opportunity to sense the presence of a great live civilisation.

His exhibition is an important contribution by the Tretyakov Gallery towards the collecting of our country's culture.

The miraculous flexibility of plasticity, and the exquisite forms and lines in Dashi Namdakov's works call for spiritual contemplation, inducing endless associations in viewers' imagination. His art has a certain magnetism originating in the Shaman culture associated with cosmism, inconceivable for the uninitiated, mystic in its poignant spirituality, its attributes and rituals generated by the all-embracing perception of the universe and endowed with inexplicable, supernatural power. Dashi's art is a rare and valuable fusion of wisdom of many generations - philosophical, moral and aesthetic conceptions turned by the artist's innate intuition and talent into unique artistic and poetical allegories. Creating his works, the artist performs his solemn ritual as a divine mission, embedding a sacral meaning in his sculptures and graphics. 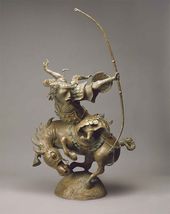 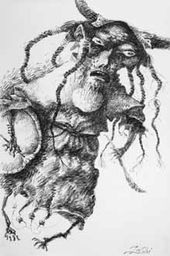 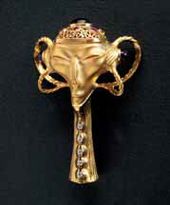 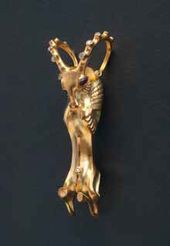 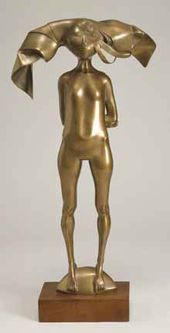