Maria Viktorovna Elkonina, by virtue of her birth into the family of the prominent artists Viktor Borisovich and Nadezhda Mikhailovna Elkonin, was pre-destined to follow the family’s calling. Through her father, who was a member of the “Four Arts” group, and through his artist friends she became acquainted with Paul Cezanne’s art. Elkonina still considers Cezanne the initiator of all of the 20th century’s artistic innovations.

Elkonina graduated from the Moscow Institute of Printing in 1959 with a degree in book illustration, but she became involved with experimental art forms while still a student. Since then she has been working mostly with wood.

Her works are hard to describe in any single word - there is so much in them. On the one hand, they can be definitely called pictures, because they are structured along the classic principles of picture-making, with clearly demarcated top and bottom spaces, close and distant views, with an understanding of the inner space of a picture and its light; most of all the artist uses the traditional technique of oil painting. On the other hand, Elkonina's works do not represent a visually re-cognizable world - instead, they evoke an image executed in the technique of pictorial bas relief.

Wood is the main material and vehicle for expression used by the artist. From wood she creates basic geometrical configurations to be used as carriers for her future pieces - ovals, circles, boards of different sizes, and planks. She arranges these figures to create a certain image, which does not need to be visually recognizable.

However, it would be wrong to call Elkonina's pieces cold abstractions. Rather, it would be more fitting to call them signs that, using structural analysis, convey spiritual ideas. Given the harmony of their proportions and their austerity of design, her pictorial counter reliefs are comparable with classical architecture.

Elkonina uses oil paint to create dark colour schemes of black and brown. But along with that, the natural colour and the texture of wood itself plays an equally important role in creating the complex space. And then starts the play of surfaces and depths, light and shadow, dark and light, as if the piece conveys a sense of musical harmony expressed in an abstract image.

Maria Elkonina is like a medieval craftsmen who, using image-signs, guides the way to contemplation and spiritual apprehension of the world. The only difference is that Elkonina uses minimalist forms that rely on the contemporary viewers' visual capabilities. 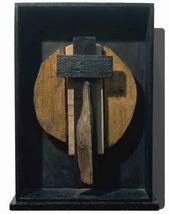 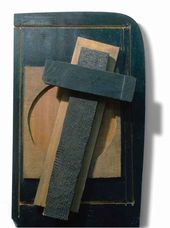