The art of Alexander Sitnikov is an astonishing aggregation of emotions and thoughts that provoke in viewers’ minds complex and contradictory reactions. The meta-language of his art is predicated on the multi-polarity of the artist’s attitudes to reality which does not correspond to the master’s idealistic belief in the harmoniousness of the universe and the imperishability of the spiritual principles of religious teachings and commandments. Because he is in a state of perpetual conflict with the reality around him and with a society of double standards, the conceptual basis of the artist’s imagery is dominated by the mythological component.

Sitnikov creates his own intellectual and moral model of existence; his paintings are akin to morality plays - with their barely perceptible preachiness, they warn and put you on the alert. The phantasmagorias born by his creative imagination are perceived both as metamorphoses of reality and as prophecies, divine revelations.

The maestro's paintings are like premonitions, the impulses they send intrigue, enthrall and captivate us, disturbing and thrilling with the ambiguity of associations. The painter's colour scheme is either filled from inside with a polyphony of colours or acquires an evocative monochromaticism. Theme and narrative in Sitnikov's works are only a conduit for the release of spiritual energy. His search for new formal techniques, elaboration of colour schemes, the interplay of light and shadow, mass and volume, fixity and motion are made by the artist into a coherent philosophical system of transformation of a specific time period into a cosmic formula similar to prophecy. It is no accident that his art relies, among other things, on the magic properties of number, which Nikolai Gumilyov described in "Bonfire” as an axiom where "intelligent number conveys all shades of meaning”.

Alexander Sitnikov is a character complex and multi-faceted, sensitive and high-minded. Rarely satisfied with his artwork, he often returns to his already finished paintings, introducing changes, remaking certain fragments and details, adding new shades and nuances to the emotions and the concept. Tentatively labeling the stages of the evolution of his art, the artist remains loyal to his conceptual and aesthetic principles.

Even the painter's early works placed him in a league of his own in the Russian art of those distant years. The originality of Sitnikov's pictorial language became the reflection of the psychology of the image thinking of the young master who was trying to distance himself from the new stereotypes which allowed the artists, using a language of allegories, to adopt a dissenting stance and to withstand the entrenched and officially cultivated canons of socialist realism. However, he was neither a non-conformist nor a dissident. Staying alone by himself, with his idealistic beliefs and fantasies, Alexander Sitnikov was consistently and selectively searching for his personal system of spiritual values remote from the ideological battles of the specific time. Still, the artist was watching the goings-on not as a recluse shut off from the world but as someone who really lived in that crazy world, but looked at it from a reverse historical perspective.

Sitnikov divides his art into several conceptual, stylistic stages, starting from objectless realism and the period of naive irony mixed with lyrical romanticism - the period when the artist manifested, fairly intuitively, an active dislike for enslavement to ideological doctrines and for complacent, hypocrite acquiescence to the desperate existence of our society. On the face of it, this protest was irrational and passive, although inside, his works were as though filled with howls of a soul in turmoil. Even such paintings of the 1960s - the era so solidly gone forever - as "Flute Player” (1965) and "Artist and Model” (1969), painted in a lyrical-romantic style, convey an inner strain and imperceptible anxiety - a seeming idyll turns into dramatic uncertainty. And the non-figurative, abstract composition "Family”, created as early as 1963, is distinguished by a not yet fully conscious tragic sensuality, which was to come into full play much later. In the same period the artist created the works that he himself defines as naive and ironic - "Aphro.-Dite and Angel”, "Man and Aphro.-Dite”. The wordplay in the names of the pieces created in 1966 also recalls that period's general tendency linked to the "playful” or "carnivalesque” culture, which held a great allure for many artists from Alexander Sitnikov's generation. They saw in it a legal opportunity to artistically withstand the political system, to adopt a dissenting stance. Of course, such permitted half-hearted defiance could not satisfy the spiritual need for self-emancipation felt by the most active and artistically independent painters. But not everyone could voluntarily give up the wellbeing that compromises with the authorities would bring.

Alexander Sitnikov, as a person honest in his convictions, did not succumb to temptations of semi-official, nearly legitimized expression of artistic "rebellion” - he did not trade off the principles that guided him in life and in art. He felt a distaste for the so-called defiance and appearance of freedom of creation with nothing underneath but personal vanities. He was stubbornly carrying out his own artistic program following Wassily Kandinsky's precept - "What is not born from the inside is dead-born”. Neglecting details, momentary impulses and influences, Sitnikov appeared as a master with global thinking, independent from the whims and irony of fortune, mature, and free from any stereotypes. He would transform an incidental occurrence, a scene from everyday life, a separate story into a timeless and symbolical phenomenon. He was not recording but deliberating, creating a personal pictorial space. Something small, seemingly insignificant would be perceived by the artist as a part of the infinite universe.

This came out most sharply at the turn of the 1970s-1980s, in the series of paintings "Blind Deaf-mutes.” The painting was brought about by a sheer chance. Early in the morning in the lobby of the Mayakovskaya subway station the artist's attention was drawn to lone blind people, who fumbled their way across an environment invisible to them. They became for Sitnikov prototypes of wanderers of the universe, representatives of humanity roaming in the dark. This is how "Demos. Blind Deaf-mutes” (1979-1980) came about. Compositionally, rhythmically and colourwise, in terms of the symbolism of narrative the people walking from nowhere to nowhere became a counterpart for the famous Bruegel's characters, albeit with a different spiritually-emotional and substantive meaning corresponding to the modern rational pragmatic outlook. Barred from the boons of civilization, abandoned and forgotten, they are a destitute lot clinging to one another and personifying the tragedy of loneliness and speechlessness. The colour scheme of every painting in the series calls up a host of associations - the perpetual wanderers' figures either blend in with the semi-tones of the subdued multi-layered paints of the bottomless darkness, while they recede into the depths of the picture's surface, or come into light with their universalized forms, transpiring on the surface of the painting, reminding about themselves with speechless reproof. This works seem to be emanating a surreal glow which imparts a grotesque quality to the images created by the painter's artistic imagination.

The amplitude of colours, the contrasts of the light and the dark, of cinnabar and burnt umber, of black and white paints introduce in the narrative of the paintings a sense of magical incompleteness of the logically unexplainable action akin to a pagan ritual. We witness a cognate symbolical dramatization, "poetics of the drama of life”, as the maestro himself defines works with similar artistic structure - or rather, an evolution of this dramatization - in the paintings "Triumph of the Red Bull” (1979), "Feast of Predators” (1979), "Taming” (1980), and another "Taming,” created in 1993. Conceptually unified, these pieces are cognate both in terms of meaning and imagery. They are variations on and modifications of general humanitarian problems, re-molded by the author in line with his artistic emotions and concepts. Here he did not exhaust himself yet or fully realize the potential of his talent, but he needed to step aside from this complex system of pictorial impromptus.

Sitnikov was looking for a pithier and more laconic equivalent for the intuitive philosophical realization of the emotions and thoughts that overwhelmed him. However, this process was developing concurrently with the process of expansion of the array of artistic techniques and methods - the artist continued to produce paintings with involved structure, forever filling them with new emotional and substantive meanings. His paintings acquired a tangible effect of a relief - a visual illusion of form started interacting with the palpable mass of a painting. These works start to feature numbers which seem to turn the present towards the depth of the past, towards the unconscious, broadening the limits of time and space. The existential component of Alexander Sitnikov's outlook and artistic system, the component traceable to the irrationalist philosophy of Soren Kierkegaard and Lev Shestov, showed more and more in his works.

A mixture of pagan and Christian, irrationalist and rational, objectless and figurative are integral parts of the maestro's array of imagery. Surely, this diversified unity has something that brings together different strands of Sitnikov's personality, something that precludes you from even momentarily suspecting him of eclecticism of manner and style. As mentioned earlier, he has been consistent in his art. The painter's pieces suggest that the author drew on theosophic ideas and the various traditions of Russian and international art. And still, he remains highly selective in techniques and methods, and that leads him to a quest for universal, allembracing pictorial structures akin to Kazimir Malevich's suprematist compositions, and Vladimir Tatlin's prouns.

The road to this lies through the pictograms of his own making, somewhat resembling hieroglyphs, calligraphic signsymbols which synthesize meaning and word, sound and image. In his latest works Sitnikov feels an ever stronger desire to use specific objects and historical tackle, as well as local colour designs which, composed of black, white and red, replaced the multi-layered, finely nuanced painting style. He introduces into his symbolical compositions collage, assemblage, frottage or imitations thereof, and relief and counter-relief. In Sitnikov's language constructs made of geometrical elements such as circle or vertical symbolize power of authority, while a horizontal signifies society, and so on. The artist includes in his compositions magical combinations of numbers and some attributes of the Soviet era - the five-pointed star, hammer and sickle.

Out of this assortment of geometrical elements, objects and numbers rises the dramatized concept of Alexander Sitnikov's new series of paintings with the general title "Native Tongue” - pieces with unusual emotional energy and historical association. Demonstrating the peculiar historicism of the artist's imagery, the synthetism and metaphorism of his art, these works have shown the evolution of Sitnikov's art from contemplative irony and idealistic romanticism to grotesque actualization of the universally relevant human tragedy and the contradictory notions of space and time, of the alarming music of our times, of the mythology of a past not yet forgotten. 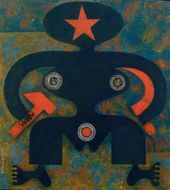 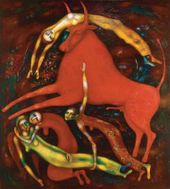 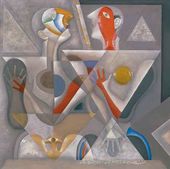 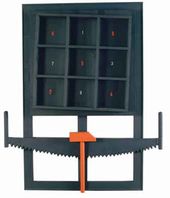 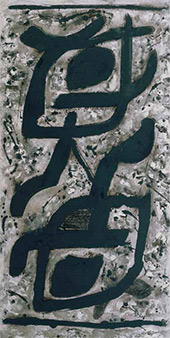