Andrei Grositsky is an artist who belongs to a generation of innovators working in a period when realism prevailed. He received a classical training at the Surikov Institute (under the tutorship of Dmitry Mochalsky), and this academic education distinguishes him from many artists who, starting from the late 1950s, belonged to the circle of the so-called “non-official art”.

In 1968 Grositsky became a member of the Artists' Union, and at about the same time he started exhibiting at the unofficial exhibitions of Soviet counter-culture artists. Long friendships and the experience of working side-byside with Mikhail Roginsky, Boris Turetsky, Ivan Chuikov and other artists from that circle, dating back to the early 1960s, enabled Grositsky to widen his knowledge of world avant-garde art, and to look at it through the prism of his personal experience.

Like every artist on a personal quest, Grositsky at one time followed paths previously trodden by many of his contemporaries - the path from Paul Cezanne and Russian cubism, through the techniques of surrealism, to a personal vision of the world and art's potential. Finally this quest formed the artist's individual artistic method, based on a realist artistic manner The major change occurred in the late 1960s, when the artist found himself in conceptual art.

Although evolving along the path of the international art trends of the second half of the 20th century, Grositsky is nevertheless different. Due to the peculiarities of his relationship with the world, Grositsky seems more profound than Western artists, who rely on ideas and imagery from advertising and the mass media. He is an artist astonishingly Russian in his essence, who works in the spirit of "new objectivity”, which combines technical traditionalism and modernity in the choice of models.

Formally, Andrei Grositsky is a past master of the still-life. However, although the exterior of an object is important for the artist, given that most of his pictures feature the waste and refuse from human activity, this aspect is not what matters the most to him - the artist is focused on the philosophical, metaphysical component of his "heroes”. And this is the quality that distinguishes his work from the pictures of pop-artists.

A hyperbolization of seemingly ageless objects, such as old lamps, equipment blocks, remains of rusty pipes and scuffed and crushed metal paint tubes and the like, impart so much monumentality and inner importance that one starts to sense the cosmic significance of the object.

The category of time is integral to and definitive for Grositsky's art. His objects, expressing the world of "current moment”, seem to face the world of eternity. The lustiness of perishing matter, revealing a strange beauty that only postmodernism can be drawn to, finds expression through various artistic techniques. Not only the scaling-up, but also the use of elements of relief, the irregularity of the borders of the canvas, the use of collage, the juxtaposition of a realist artistic technique with a usually neutral background - all this imparts to Grositsky's works an unusual tone combining the cosmic and the earth-bound, greatness and poetry, eternity and ephemera. 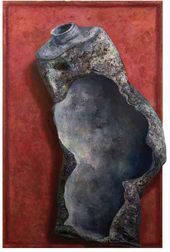 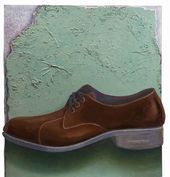 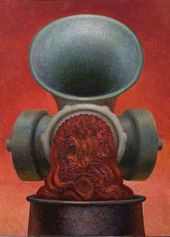