A Valued Quartet. The 250th Anniversary of the Russian Academy of Arts

The display of works by Russian painters held in the exhibition halls of the Russian Academy of Arts on Prechistenka Street in Moscow, in anticipation of its jubilee, further develops the tradition of exhibiting the achievements of modern Russian artistic culture.

A succession of personal shows of three corresponding members of the Academy, Vyacheslav Zhelvakov, Vasily Nesterenko, and Dmitry Sandzhiev, and that of Anatoly Lyubavin (who has yet to receive this honorary title) were held from March to October and received public attention and appreciation.

Zhelvakov, a wide-profile artist, an exceptional master of graphic arts, a lithographer, an aquafortist and a gifted painter, was the first to take the lead from his predecessors. Though showing a variety of artistic techniques and stylistic strokes his paintings share a remarkable consistency, spirituality and a single personal system of image creation. Pencil drawings, lithographs, etchings, pastels and oil paintings address Russia's past and present. Zhelvakov displays a genuine interest both in legendary figures and his contemporaries, people whose personal qualities, behaviour and high morals mirror those of the artist himself. His graphic cycles with scenes of Russian history portray legendary personalities of the past and the heroic acts of the Russian people. They are filled with a heroic pathos which is confirmed by sheets devoted to such great Russian military leaders as Dmitry Donskoi, Alexander Suvorov, Mikhail Kutuzov and Georgy Zhukov. Drawings showing the everyday life and work of policemen and guardsmen in the streets of pre-Revolutionary Russian villages and towns have a very different aura. The images of this series are created with a technique of grotesque and humorous undertones. Here the artist employs - with great skill and precision - the cinematographic still picture technique and demonstrates an ingenious grasp of pencil drawing. A mature and accomplished master, he successfully shows his capacities and artistic potential aimed at the big perspective.

The works of Anatoly Lyubavin, whose exhibition followed that of Zhelvakov, are created in a different graphic and narrative manner, dominated by a conceptual approach to creating artistic images. The graphic artist who has gained public recognition and earned good reviews both from critics and his fellow artists shows a preference for painting. A wonderful graphic artist with a clever understanding of all the delicate nuances of black and white images, the tone relationship between lines and strokes, the dabs and surface of paper, he has used his graphic art experience in his paintings. The carefully aligned compositions, the richness of colour gradations within a certain purposefully limited range give the viewer a sense of an unshakeable connection between time and space. The artist comes across as a romantically spiritual and at the same time solid artistic figure. Lyubavin's paintings strike the viewer as poetic and metaphoric, with a perceptiveness and a uniquely deep understanding of the world that surrounds us. They are simultaneously polychromatic and monochrome, optimistic and dramatic. They bare a mystery which arouses complex associations in the viewer's mind.

The paintings of Vasily Nesterenko who enjoys well-deserved public recognition and the respect of many art patrons and sponsors leave a very different impression - mainly because they are rather large and more elaborate in their subjects, filled with pathos. Important events in Russian history have been given their due in his paintings. Although his view of the past doesn't contradict generally accepted facts or their objective coverage the artist does not remain a passive figure; on the contrary, he stresses a sense of involvement in the fates of his characters. Nesterenko often idealizes certain details and the personal qualities of Russian historical figures, caused by a justified desire to arouse in the viewer a sense of pride for his country. Vasily Nesterenko's paintings may be somewhat narrative in nature but this is required by the historical genre. His skillful complex multi-figure compositions bear impressive motivation and interpretation of the artistic images created by Nesterenko.

Dmitry Sandzhiev is a philosopher whose thoughts are focused on the past and early world civilizations, a science fiction painter who gives a forecast of the course of historical processes. The unique and endless world of his images is a product of his remarkable imagination and gift. Sandzhiev's works are filled with prototypes of the future born from intuition, subconscious premonition and a serious study of ancient civilizations. Much like Zhelvakov and Lyubavin the artist started as a graphic easel painter and worked as such for quite some time. He switched to painting over a decade ago. The artist has found his own unique style and created a signature painting technique which unveils the web of long gone centuries, lending a mysteriousness and magnetic attraction to his works. An imitation of craquelure captures the viewer like a web of time, and his works reflect a cosmic understanding of past, present and future worlds. This cosmic quality, however, is different from that of one of his most famous early works acquired by the Tretyakov Gallery, the triptych titled "The Shepherd's Widow”, a series of brilliant pencil drawings created on the basis of actual life experience, which drew attention to the artist and revealed his remarkable potential. Sandzhiev employs different materials and painting techniques with a unique inventiveness and industriousness. Formal discoveries yield to the graphic concepts and spiritual content of his creative ideas and projects.

Each of the artists whose works have been displayed in the Russian Academy of Arts has his own source of inspiration, priorities, signature style and manner. That is why we are interested in more than their common traits and background. Graduates and top- grade students of the most prestigious Moscow academic artistic institution, the Moscow Surikov Art Institute, they enjoy practically absolute freedom of creative outlet in the stormy waves of the contemporary "semi-market”, and in many ways less than artistic lives of today. This kind of freedom is associated with professional skill and culture, criteria of craft and fundamental workmanship acquired within the walls of the institute. No matter how discriminatory they may be, critics cannot deny the said artists their high level of professionalism. We do not intend to imply that these artists reject the support of the "powers that be” of the world. And yet it's not the sponsors but the artists themselves who invite them to a "feast of the soul” where they introduce a meal of their own unique making with recipes beyond the reach of those who create their menus to please the gourmets of salon art.

Our heroes have no need to waste their efforts on "begging” for ranks, titles or prizes. It's like the famous words by the Russian classic Mikhail Bulgakov: they are brought to them instead. There are two main reasons why potential buyers trust the works of Zhelvakov, Lyubavin, Nesterenko and Sandzhiev and why these artists don't lack for continuing moral - including that of the mass media - and material support of their creative quests.

The first is the already mentioned high level of their skill, one that suggests a genetic kinship with the traditions of professional art that go back to antiquity and the Renaissance. The second is the fact that they do not strive to create so-called "concepts” or sensational show business projects but rather create worthy easel paintings with a growing real value. Adding Sergei Andriyaka, Dmitry Belyukin, Sergei Prisekin and Nikolai Mukhin to these artists, together they form a new constellation of almost established classics of modern art. 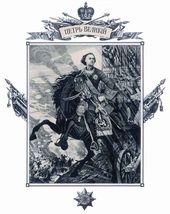 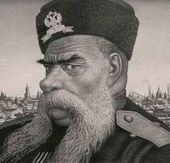 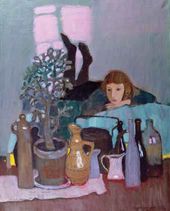 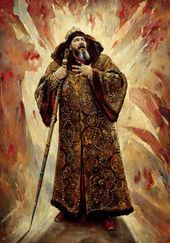 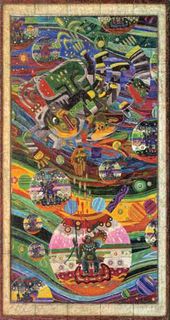 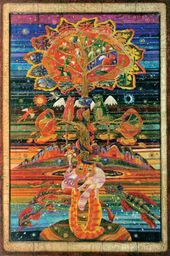