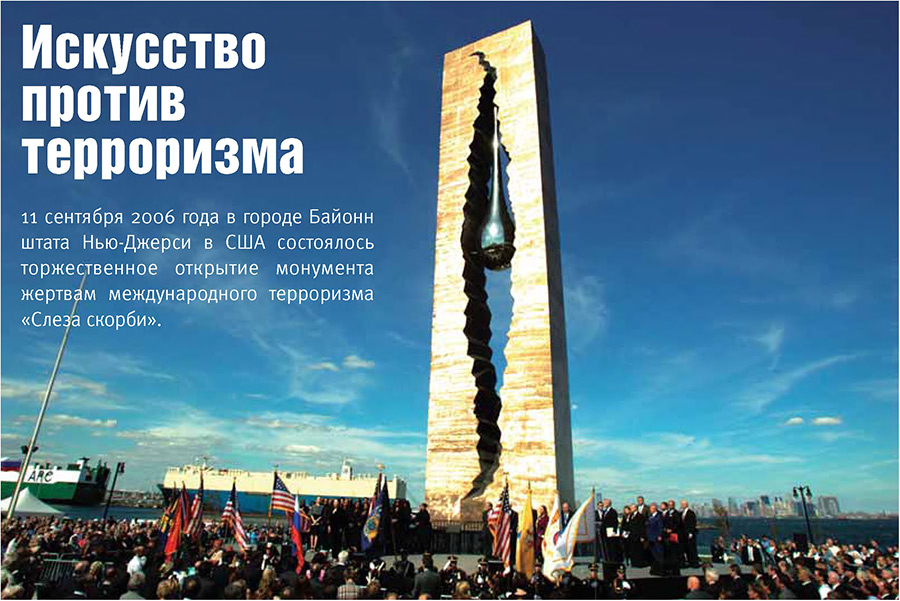 The unveiling ceremony was attended by the Chairman of the Federation Council of the Federal Assembly of the Russian Federation Sergei Mironov, Bayonne Mayor Joseph V. Doria Jr., the sculptor of the monument, President of the Russian Academy of Arts Zurab Tsereteli, and members of the official delegations. An address from Russian President Vladimir Putin to the Bayonne Mayor was read out - it said, in particular, that "only when united can the civilized world confront the barbaric and insane threat of terror, employing all the options available to humankind in order to fight for the rights and freedoms of individuals, the right to life first of all”.

Five years after New York saw the attacks, the horrible pictures of the destruction of the Twin Towers can still be remembered. "On that day I cried myself and saw tears on many people's faces. The faces of Americans, who were shattered by what had happened, and weeping over their near and dear ones; the faces of Russians, who here in Moscow felt a deep sorrow for the unspeakable tragedy and brought flowers to the US embassy,” reminisced the sculptor of the monument Zurab Tsereteli. It was then that the idea for the monument was conceived - a unity of the people of two countries, of people all over the world. The key image sprang to mind at once - a teardrop. Sorrow and tears are not ethnically divided. Every person grieves and cries like the rest of his kind, if his soul suffers, if he feels pain. But people also cry when they rejoice. Evil will be defeated and teardrops of grief will turn into teardrops of joy.

On September 16 2005, on a peninsula on the Bayonne waterfront, on the site of the future memorial, a black granite foundation was laid at a ceremony. The base with an inscription below, in Russian and English, read: "On this site will stand a monument to the struggle against world terror. A gift from the Russian people.” 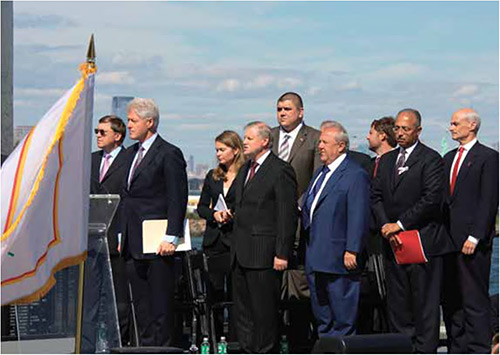 The sculptural composition is a stately bronze pylon 30 meters high. The pylon's silhouette reproduces that of a skyscraper, and the jagged lines running vertically through its centre create the dramatic image of destruction - the destruction of the peaceful life of people. In the opening between the jagged lines hangs a big glistening teardrop - a teardrop of grief and compassion. The granite base of the monument has 11 facets, listing the engraved names of the victims of 9/11 - more than 3,000 in all - as well as the names of those who died in the attacks at the World Trade Center in 1993. Nine footpaths around the monument converge at its base: the figures' symbolism is tied to the date of the tragedy.

The site of the monument is in perfect accord with the sculpture's key idea, and the monument is clearly visible from every direction. The clear, aerial silhouette towers against the sky. If you look at the monument from New Jersey, right behind the sculpture a panorama of Manhattan stretches out, affording a view of precisely the spot where the legendary twin towers were located. It is as if the bronze image of the destroyed skyscrapers is projected on the place where they used to stand.

The iron units for the piece - steel frames and the 11-meter-tall teardrop made of bright-finished steel - were manufactured at Russian plants. Monumentskulptura, a famous production plant in St. Petersburg, cast all the parts for the sculpture's bronze coating and handled most of the production work - much of it involving very complex procedures - including its assembly. The history of this famed St. Petersburg production plant, which originated from the Academy of Arts foundry shops, dates back to the period of Catherine the Great. Due to the efforts of the President of the Russian Academy of Arts Zurab Tsereteli the plant was kept within the Academy's fold and continues to function at full capacity. Presently there are plans underway to open a workshop affiliated with the plant, in order to bring back to life the unique traditions of Russian craftsmanship.

On August 3 2005 a press conference of the President of the Russian Academy of Arts Zurab Tsereteli was held in St. Petersburg, on the occasion of the completion of the artist's work on the monument and the sculpture's shipment to the US. The loading of the statue at St. Petersburg harbour was a truly unique operation. Next the unusual cargo, consisting of 200 units weighing 176 tons in all crossed the Atlantic and reached the New World on August 20 2005. The mounting of the monument involved colossal effort. The monument rests on 8 stilts 45 meters deep underground. For securing the iron units together, more than 3,500 stainless steel bolts and more than 1,300 bolts made of a special heavy-duty material were required. The implementation of so unique a project is testimony to the capacity of Russia's national art, science and industry. 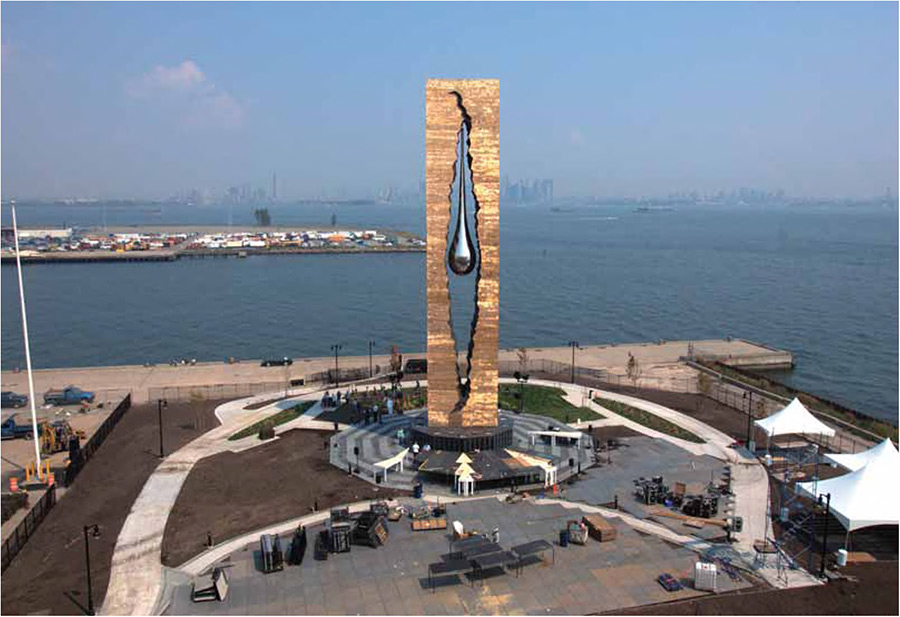 While the project was in the works, letters from American citizens, including New Jersey residents, were pouring in to the sculptor's address in Russia. In the letters, the old and the young wrote about their emotions, about how they felt in connection with the 9/11 drama. Every message contained an expression of gratitude to the Russian people, who gave support to the people of the United States. The idea of the memorial excited many, making them speak up about their feelings. The creation of the monument provoked a lively dialogue, leading many people to discuss honestly so horrible a phenomenon as terror in all its aspects.

"If we can change our attitudes to one another, we can try to prevent similar tragedies in the future,” reflected one letter writer. "As a nation, we should be kind and treat with understanding nations who are less fortunate than we are.” The straightforward responses of such individuals show that art does not exist in a vacuum - it is an integral part of life.