The Tretyakov Gallery and the "Tretyakov Gallery” magazine hold an annual national competition named after Pavel Tretyakov for young artists (up to 35 years years old) for the best work of realistic art.

The purpose of the competition is to revive the great humanistic ideas of Russian realist art, and to support the work of young artists who create socially important and significant pieces of high artistic value.

The second competition involved significantly more contestants, and also covered new areas of the country. More than 3,000 paintings, sculptures and graphic works were submitted to the first stage of the competition by 1,287 artists, with jury selection for its final stage reducing that number to 54 artists. They are drawn from a total of 29 cities - from Moscow and St. Petersburg, Vladivostok and Yoschkar-Ola, Vladimir and Makhachkala, Krasnoyarsk and Yaroslavl, Nizhnevartovsk and Nakhodka, Omsk and Orel, Perm and Saratov, Nizhny Novgorod and Tula...

The quality of the works submitted has also risen appreciably, since the very fact of participating in the competition makes special demands on the artists who hope to receive either a prize or a diploma.

The jury, headed by Tair Salakhov, vicepresident of the Russian Academy of Art, and a People's Artist of the USSR, chose 54 pieces for final exhibition. Their creators are students and graduates of the leading art schools and institutions of Russia.

The organisers note that the themes and subjects of the pieces selected reflect a growing interest among young creative people in events from Russia's historical past, as well as in the problems of present day reality, and the spiritual life and personality of the contemporary citizen.

The paintings, sculptural and graphic works submitted are characterised by their stylistic variety; their expressive decisions on form and professional level of execution reflect the state of national art schools today and contemporary attitudes towards the revival of the traditions of Russian art.

The exhibition in the Tretyakov Gallery which displayed the best works from the competition gave young artists a strong boost to improve their skills, to be critical of the results of their own professional work, and to appreciate and cherish their spiritual and cultural heritage.

The previous competition, the first such experience of involving young artists in the sphere of "major" art and judging the level of their professional training, was praised by and received positive comments from the Russian Academy of Art. Leaders from the country's creative unions and higher art educational institutions expressed similar opinions.

The Pavel Tretyakov competition is judged in three nominations - for painting, sculpture and graphics.

Its finalists in the painting category are:

The finalists in the sculpture category are:

In the graphics category. The second prize and a trip to Spain was awarded to Michael Dutsev from Nizhny Novgorod for his "August", with the third prize awarded to Maxim Alekseev (from
the town of Suvorov in the Tula region) for his "Village Confusion".

The youngest contestant, Alexandra Korolkova, from Moscow, received a special prize from the "SeverStal" Group for her graphic work "Map of Robinson's Island". Vitaly Gudvill from Krasnoyarsk received a special prize from the Moscow State Museum "Dom Burganova" (The Burganov House) for the picture "Golden Morning", and Stanislav Brusilov from Moscow received a financial grant from the company "Traditsiy Kachestva" (The Traditions of Quality) for his landscape painting "Spas-Temnya".

The Pavel Tretyakov competition has become a significant event for all its participants and viewers, and has proved the necessity, importance and vitality of such large-scale reviews of young talent.

The fact that the next, third Pavel Tretyakov national competition is going to be held in the year of the 150th anniversary of the foundation of the Tretyakov Gallery raises its status and makes special demands on future participants. 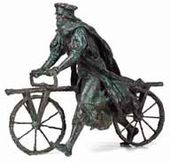 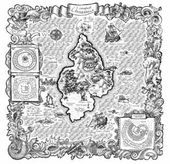 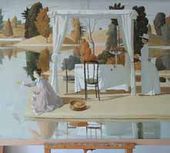 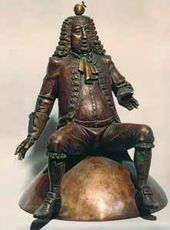