It is clear that the work of the great master and founder of abstract art Vasily Kandinsky is under continuous reassessment; this is largely due to the input of Russian researchers who reach new conclusions about his work by studying Russian archives, as well as the vast state and private collections of paintings and graphic works, and investigate the great artist's legacy abroad. In this respect the book by Moscow State University professor Valery S. Turchin "Kandinskii v Rossii" ("Kandinsky in Russia") published by "Khudozhnik i kniga" in Moscow this year has become a fundamental scientific summary of the artist's legacy.

Vast research contributes to a work of 450 pages, with a great many illustrations displaying new archival material as well as a central catalogue of Kandinsky's works, that is the result of twenty years of the scholar's labour. The book was preceded by the author's numerous publications and lectures; however, only published in this new - and magnificent - volume does this kind of research acquire a worthy form, and provide the opportunity to think about what the artist meant for Russia, and what Russia was to him. Such a view of events helps us draw important conclusions.

Although foreign researchers traditionally cite the influence of German or French art on Kandinsky's works, based on the fact that he was a citizen of various European countries for short periods of time, his connection with his Motherland is obvious. It's not just that the artist was deprived of his Russian citizenship as a "defector” (he went to Germany in 1921 on the instructions of the People's Commissariat of Enlightenment). The spirit of his art itself, an art based on Russian traditions, is a clear sign of that connection. The researcher pays special attention to Kandinsky's early works - an important factor, because they reveal the essence of his mentality, and his connection with Russian art, literature and philosophy.

The author manages to trace the artist's continuous trips back to Russia even during his first enforced stay in Germany. He participated in exhibitions in Moscow, St. Petersburg, Odessa and Kiev; he wrote articles for Russian magazines and newspapers, helped to organize the "Knave of Diamonds” association and admitted that he made his own Munich- based society, "The Blue Rider”, halfRussian.

Finally Turchin, unlike his foreign colleagues, quite justifiably pays special attention to the period of 1914-1921 when the great artist lived in Moscow and built a house for himself on Zubovskaya Square. It's worth mentioning that thanks to Turchin's efforts, as well as those of Moscow City Hall, this building finally has a memorial plaque by the sculptor Leonid Baranov gracing its wall. During this same period the artist created a series of important works including the famous "Composition VII”, and actively worked in the foreign department of the People's Commissariat of Enlightenment and its purchasing committee, organized the State Academy of Art History and taught at the Moscow State Higher Arts and Crafts Workshop. Whereas foreign researchers, due to lack of material, have dedicated very few pages to this important period Turchin has whole chapters about it.

In addition to building on the information about the artist's work in his home country the author gives a special perspective for understanding Kandinsky's whole legacy. He sees in the early works a pluralism of manner, a complex combination of the abstract and realistic principles. The author skillfully combines the new archival material with iconographic and iconological studies, for instance in the passages about "the story”, "the way”, and other such issues. Turchin views Kandinsky's abstraction as a very complex phenomenon with symbols and archetypes. As a result, the artist and his works appear less schematic, more alive and, we feel, much closer to reality. 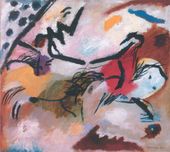