A Portrait in Search of its Viewers

LAST YEAR, THE HIGHLY SUCCESSFUL EXHIBITION ILJA REPIN, AUF DER SUCHE NACH RUSSLAND (ILYA REPIN. IN SEARCH OF RUSSIA) GAVE THE GERMAN PUBLIC A WONDERFUL OPPORTUNITY TO ENJOY A NUMBER OF REPINS WORKS FROM THE COLLECTIONS OF RUSSIAN NATIONAL MUSEUMS. THE EXHIBITION INCLUDED FIVE PAINTINGS FROM THE CENTRAL STATE MUSEUM OF MODERN RUSSIAN HISTORY. AMONG THEM WAS REPINS UNIQUE PORTRAIT OF THE FAMOUS RUSSIAN POLITICIAN AND LAWYER ALEXANDER KERENSKY (1881-1970), LISTED IN THE MUSEUMS MAIN INVENTORY UNDER NO. 12489/4. 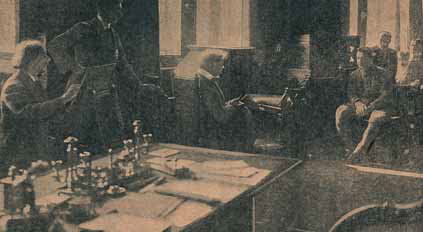 Ilya Repin and Isaac Brodsky in the Winter Palace, 1917 working on the portrait of Alexander Kerensky
Ogonyok magazine, November 1926

Kerensky rose to power during the February revolution of 1917. Between March and October of that year he occupied a number of leading posts in the Provisional Government, moving successively from Minister of Justice to War and Naval Minister Prime Minister and, finally Supreme Commander of the Russian Army.

Kerensky's period in power was brief but eventful. He was a deeply ambiguous figure, whom artists and historians alike have always had great difficulty in understanding and portraying.

Kerensky was seldom painted. Yet he was a tremendously ambitious man who loved to be filmed and photographed. His desire to be the centre of attention must have prompted him to view the eminent artists of his time as tools to achieve immortality. One recalls Mayakovsky's "barrister" in Khorosho!

'Stitched up into history
Numbered
And stapled -
Now he is drawn
By both Brodsky and Repin.'

Repin himself recalls the August 1917 sitting with simple equanimity. "Kerensky's portrait was painted from a sketch done from life in Nicholas the Second's study. I painted with Brodsky... Kerensky sat down in an armchair bathed in sunlight and I painted him just as he was."

Needless to say, the location chosen had obvious political significance. The new rising star is portrayed in the overthrown ruler's study by the master who painted the famous "Ceremonial Meeting of the State Council": all this indicates, if not Kerensky's direct succession to power, at least the high status of his authority.

Both Repin and his pupil Isaac Brodsky then finished their portraits of Kerensky in their own studios. Repin's work fell into several stages. His portrait was finished only in 1918, by which time the sitter himself had fallen from grace.

If the history of this portrait's creation is curious, its subsequent fate is nothing less than dramatic. After the Soviets came to power, Finland was declared independent at the end of 1917. Repin chose to remain in his famous estate of Penaty in Kuokkala, and it was not until late 1926 that a delegation of his pupils, made up of Brodsky, Katsman and Radimov, was able to visit the master. It was then that Repin gave four of his paintings, including the portrait of Kerensky, to the Museum of the Revolution (as the Museum of Modern History of Russia was known until 1998). At that time this was one of the country's leading museums, and one with which Repin's pupils were closely associated. Curiously enough, Brodsky's portrait of Kerensky is also still owned by the museum - but then that is another, no less fascinating story.

Why did Repin choose to give his portrait of Kerensky to the Museum of the Revolution in particular? By 1926, the mere mention of the former minister's name was enough to cause problems. But Repin was aware of a detail known to very few: that Kerensky had quite literally had a hand in setting up the museum.

After the February 1917 revolution, the democratic intelligentsia had been eager to commemorate the spirit of the revolution and the fight for freedom. Early in March, the Commissar for Moscow Nikolai Kishkin, later to become a government minister, proposed this matter for consideration by the Provisional Government. Kerensky was among those to approve and sign the decision to create a Museum of the Revolution in Moscow. By July of that year, the collection of exhibits had begun. Many issues around the museum's establishment were debated in the building which housed the well-known English Club, which, since April 1917, was also home to the Committee on Moscow Museums. In August, around the time of his sitting for Repin, Kerensky gave a speech in this building. In 1924, the first exhibition of the Museum of the Revolution, entitled "Red Moscow", was held there. From then onwards, the building remained the property of the museum.

Following the fate of Repin's painting, the story moves ahead to 1926, when Kerensky's portrait finally returned to Soviet Russia. That same year, the portrait was shown both at the Eighth Exhibition of the Association of Artists of Revolutionary Russia (AKhRR), and at the Museum of the Revolution's "Russian Revolution in the Arts" exhibition. Repin's portrait of the Prime Minister overthrown by the Soviets aroused a great deal of public interest and was much discussed in the press. Amongst the many critical reviews, an article published by the magazine "Ogonyok" is worthy of note. The author calls Repin's portrait "the very image of kerenschina'' (a term used to imply the defeated bourgeois intelligentsia).

Following the exhibition in the Museum of the Revolution, Kerensky's portrait was immediately consigned to the museum's special depository, which meant that it would no longer be exhibited or even studied by specialists.

But this was not enough: in 1935 an order was given to have the painting destroyed. As was common in such cases, the portrait was branded as "devoid of artistic value". Naturally, this absurd statement was not the true reason behind such an outrageous decision. The totalitarian regime denied and distorted many historical facts, and it was unthinkable that the renowned master Repin, who "sung the praises of the proletariat" and had produced "Barge Haulers on the Volga", could also portray one of the proletarian revolution's main enemies. In the circumstances, destroying the painting was preferable to accepting such an inconvenient fact.

Thanks to the museum's staff, however, the portrait survived. Regardless of the risks involved, they took the painting off its stretcher and placed it between other canvases in the special depository, hoping it would not be detected. Their plan proved successful: the exhibit was listed as destroyed, and no further interest was shown in its continued existence within the museum's collection.

With the coming of glasnost and perestroika many special depositories were reopened. Thus, the Museum of the Revolution was found to possess a large number of exhibits listed as destroyed or sent to other institutions. Among these was Repin's portrait of Kerensky.

In 1992 the portrait was restored. Immediately afterwards, it was shown in the "Faces of an Era: 1917-1985" exhibition organised by the museum. This brought together portraits of the most significant figures in Russian and Soviet 20th century history. Repin's portrait aroused a great deal of interest among both Russian and foreign researchers. Without doubt, the re-emergence of a work such as this was a real stroke of luck for specialists and art lovers alike.

Nevertheless, the exhibition brought to light a significant flaw in the portrait. Painted on linoleum, it could not be exhibited for long periods of time, since this special material quickly becomes deformed and is extremely hard to straighten.

After several more exhibitions in the Museum of the Revolution, it was decided to restore Kerensky's portrait completely. Throughout 2002 the canvas was straightened and the paint layer cleaned and secured. A special frame was made to prevent further deformation of the painting's surface and protect it from the damp.

After its restoration the painting, previously considered somewhat sombre and dull, suddenly shone with rich colours and startling contrasts. Yet it still conveys an impression of heaviness: Kerensky's bulky, almost threedimensional form looms in front of the viewer with a statuesque mouldedness typical of Repin's subjects. The flawless composition serves only to accentuate the sitter's uncomfortable pose. The shaded areas are relieved by few light patches, and the multi-layered painting contrasts strikingly with the weary expression of a man weighed down with the impossible task of governing a new, revolutionary republic.

Whilst the restoration process was going on, the museum was invited to take part in the German Repin retrospective. And so it was that German art lovers were the first to enjoy the portrait in its restored state. 77 years after its final exhibition before its long period of storage, the painting remains legendary for many museum specialists and restorers. 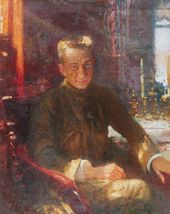 Alexander GERASIMOV. The English Club in the 1830s. From the 1920s
Ink on paper. 53.2 by 40 cm
The Central State Museum of Modern History of Russia 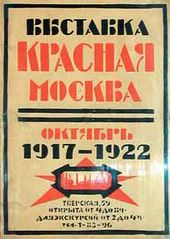 Poster for the First Exhibition Krasnaya Moskva (Red Moscow) in the Museum of the Revolution. 1922
The Central State Museum of Modern History of Russia