The new exhibition at the Tretyakov Gallery's Krymsky Val space, "Play - A Serious Matter", is an unusual one for any art gallery. But then the wonderful Swedish writer Astrid Lindgren always believed that play is vital for developing a child's personality, communication skills and creative imagination. Lindgren not only wrote books for children; she was also one of Sweden's key opinion-makers in areas such as tax policy, the use of nuclear energy, the rights of children and the humane treatment of animals. Her books are popular all around the world, and, thanks to them, millions of readers have learned a little bit more about Sweden. With the centenary of Lindgren's birth approaching, the Swedish Institute and the Government Agency for Travelling Exhibitions have designed a grand international project involving a play exhibition which will visit several European capitals. Children and adults in Belgrade, Paris, Berlin and Vienna will be able to enjoy this unusual event before it returns to Stockholm for a grand finale in 2006 or 2007; the premiere has already taken place in Moscow. The Russian capital's Tretyakov Gallery was chosen as the partner for the Swedish organisers, who included the Sweden Embassy in Moscow.

What makes the Tretyakov Gallery so well-suited for such a complex project? For almost 80 years, the gallery has been engaged in educational work, geared chiefly towards the needs of children and young people. Its Krymsky Val building proved the kind of "space" the project's organizers had in mind, and the modern art exhibition housed in this part of the Tretyakov, itself at times playful and provocative, blended well with its new neighbour To complement the unusual "Play" event, the gallery's staff put together a special exhibition of 20th- century animal sculptures, with guided
tours for children and an interactive computer programme.

What makes the Tretyakov Gallery's new exhibition so unusual? Most of all, it is not the sort of exhibition space that visitors are used to. Its centrepiece is a large play pavilion of around 120 square metres. The walls resemble a deep forest: this area is for children aged between six and twelve, and these little visitors are only admitted barefoot. Astrid Lindgren always felt that, for play, children need time and a space in which they can feel both free and protected. Article 31 of the UN Convention on the Rights of the Child stipulates that "State Parties recognise the right of the child to rest and leisure, to engage in play and recreational activities appropriate to the age of the child."

The pavilion is divided into different sections. A group of "trees" invite children craving active games to climb up them, and then whizz down on special slides. The dressing-up room decked out with mirrors and brimming with exotic costumes will delight lovers of role-play. Here, anyone can become a princess - or a troll! There is a section for games with rules to follow, and a "constructor's corner" for those with a passion for building. A quiet spot welcomes children trying to get their breath back, as well as parents waiting patiently for their "little darlings" to finish. There is also a corner for drawing and other forms of creative self-expression. Students from the Stockholm Pedagogical Art Institute and Russian State University for the Humanities are on hand to help little visitors find their way around this Aladdin's cave. This University, incidentally, has had an active Swedish Centre for a number of years.

Besides this heaven of fun and games, the exhibition includes a section devoted to Astrid Lindgren herself. Six large stands made of fabric stretched over aluminium frames offer visitors a collection of photographs of the wellknown writer, drawings of her characters and a series of Swedish landscapes. This part of the exhibition is more likely to interest adult visitors. Parents and teachers will also enjoy the film "To a Faraway Land", made specially for the exhibition. This is a documentary about Astrid Lind- gren: how she came to hold her views on love and respect, the denial of violence, the child's right to live and receive attention from adults, the right to play, culture, freedom and a future.

On Sundays, visitors will also be able to watch a number of films based on books by Lindgren and, of course, cartoons starring the unforgettable Karls- son. Swedes marvel at Russian affection for the plump little man who inhabits a rooftop: as they see it, Karlsson is not much more than an idle, irresponsible and generally unprepossessing character. This view was amply corroborated by the artist Ilon Wikland's recent full-length animated picture.

The whole diverse programme will be coordinated by the Children's Creative Workshop, which was established at the beginning of 2002 under the auspices of Johnson & Johnson, and is headed by E.L. Gerasimova.

"Play - A Serious Matter" runs in the Tretyakov Gallery on Krymsky Val between 2 September and 10 October. 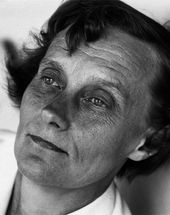