This year the Trelyakov Gallery can boast ofa new addition to its Vrubel collection, which is known as one of the most representative in the world. The new acquisition is "Portrait ofNastya Vrubel" - Nastya being the shortened, affectionate name for Anastasia, who was the painter's half-sister. It had been a family treasure trad-itionally passed on from mother to daughter, and was acquired by the Gallery from Anastasia's granddaughter; the work is printed here for the first time.

In the spring of 1894 Mikhail Vrubel visited Italy, when he accompanied the son of the famous connoisseur of art Savva Mamontov while the former was there for medical treatment. On his return journey, crossing the Mediterranean from Genoa to Sicily, and then past Greece to Istanbul and into the Black Sea, the artist made a month-long - from the end of April to the middle of May - stay in Odessa, where his father's family lived.

The portrait is mentioned in a letter of 19 April 1894 written by the painter's father to his daughter Anna, a good and devoted friend of Mikhail Vrubel. As the "Memoirs", published in 1976, state, his father wrote:

Misha... has been staying with us since Wednesday... Misha brought about 20 different views painted by him during his latest voyage. Some of them are very good. Besides, Misha made a fantasia portrait of Nastya"
(Vrubel. Perepiska. Vospominaniya o khu- dozhnike. Leningrad. 1976. pp. 123-124).

What is described in the letter as a "fantasia" may refer to the romantic interpretation of the sitter's appearance; the portrait itself is undoubtedly painted in a realistic manner. Its marked romanticism is familiar from Vrubel's portraits of his wife, Nadezhda Zabela-Vrubel, dating from a few years later.

The sitter's hair is tied in an antique knot, typical for classical images of women. It is also known from the previous owners of the picture that there was a legend in the family that at first Vrubel
depicted the girl with bare shoulders, but her parents protested: convention at the time did not permit a young girl to wear such lownecked dresses in public. The painter had to submit and "dressed" his model in a more conventional garment.

The treatment of the sitter's image suggests that in the 1890s Vrubel was interested in classical art; all the more so, given that "Portrait of Nastya Vrubel" followed the triptych "The Judgement of Paris" (1893, in the collection of the Tretyakov Gallery), the subject and manner of which reveal similar tendencies. The artist's impressions of Italy and Greece which he had visited during his recent journey must have influenced the general style of the portrait too.

The engaging atmosphere of Mediterranean culture may have inspired Vrubel to see something in his half-sister's clear-cut profile, the fine line of her neck, marble- pale smoothness of skin and the proud poise that resembles that of the beautiful women of classical times. The sitter, just 17 years old,
is portrayed in warm brown hues in a light blue dress, and with a turquoise band in her hair accent-- uating her tender age and the grace of her youth. The pattern on her dress echoes the device of the girl's hair curls, which is so typical of Vrubel's mosaic brushwork. Its confident, energetic strokes and the vivid expression of the depiction are intended to breathe life into the image, to make the young girl look fresh and alive. This picture, despite its small size, is considered one of the best portraits by the great painter.

Although the painting requires some general conservation work, including the removal of dirt, grime and other accretions from its varnish layer - which means it is likely to stay with restorers for some time - it will surely become a gem in the collection, as soon as it regains its original brightness and the freshness of its colours.

There is interest too in the biography of the subject herself. Anastasia Vrubel was born in Vilno (now Vilnius, Lithuania) on 2 April 1877, and was the artist's halfsister. She was the youngest daughter of Alexander Vrubel and his second wife, Yelizaveta Vessel.

Anastasia's life proved her to be a woman of character, which is felt in the determined expression of her face masterly conveyed in the portrait. When she was young Anastasia was known for her sculpture, though she did not work professionally.

She was married twice. Her first husband, Eugeny Khodorovich, a Navy officer, died a hero of the siege of Port Arthur, while Anastasia herself was allegedly a Sister of Mercy during the Russian- Japanese War, according to family legend. She had five children from that marriage.

She married her second husband, Alexander Nyomits, in 1915: at that time he was a staff officer in the Russian navy. In August 1917 Nyomits became Commander- in-Chief of the Black Sea Fleet, while from 1921 to 1924 he was Commander of the Soviet Navy, and became later a professor of the Navy and Air Force Academy. During World War II Nyomits achieved the rank of Vice-Admiral; the outstanding military commander died in 1967. Anastasia Vrubel-Nyomits had two children by that marriage: she died in Moscow in 1932, and is buried in the Danilovsky Cemetery.

The "Portrait of Nastya Vrubel” was acquired for the Tretyakov Gallery with the sponsorship of Anatoly Novikov. 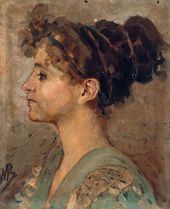