A Link Through the Years

First of all, the form they have chosen to express their idea establishes no boundaries between the artists and viewers: the language of the Iconostasis can clearly be understood by all. This is a rare factor today, when few artists address "the city and the world", preferring communication with their own kind. This may be why so many separate cultures abound today: youth culture, the "A-list" set, the worlds of gender, pop- culture, hip-hop culture, gay culture... The naturally portrayed figures of "Deisis" and their emotions are modelled with all the clarity that modern computer graphics can offer. Their visual form is more accessible to any- even the least sophisticated - viewer than classical realist art.

Turning to the meaning of the project: it is polemical and provocative, raising all the contradictions of the modern Russian mentality. We are confronted with a painfully familiar crisis of values, the disintegration of the guiding principles of morality and the mutually exclusive conclusions drawn in this situation by our contemporaries and fellow-citizens. "Deisis" attempts to show examples of a moral and spiritual dignity found in the conscious sacrifice of human personality through superhuman existential efforts. The culture engendered by radically changing times is experienced by the creators with an acute pain. This perhaps brings them close to the sources of the practice known today as "pertinent" art. The creators of "Deisis" - the idea belonged to Bondarenko - and the "pertinent" art set take similar emotional experiences as their starting- point. Yet the existential models they go on to develop are diametrically opposite: if the "pertinent" artists' standpoint could be taken as "you turn me into a brute, so a brute I will be", the creators of "Deisis" dwell on a concept of faith and will which have the power to transform our existence. The main source of faith, for them, is the sacred history of Christianity.

But today, it might be argued, plenty of artists are turning to their religious roots for inspiration. Indeed, extolling the virtues of the native tradition has become a somewhat banal substitute for the revolutionary vigour of the 1990s. In contemporary Russian art this trend is usually represented by stylised re-workings of icons and 19th-century academic paintings. Using tried and tested methods, artists produce new glossy pictures. The visual style of "Deisis" is created by Khudyakov: his exclusively technogenic style places him outside the historical evolution of the plastic arts. His working material is not drawn from Dionisii, Simon Ushakov, the Stroganov school or the Palekh artists. Nor is it to be found in the legacy of Losenko, Bruni and Semiradsky's Academy of Arts. Khudyakov borrows the techniques the project demands from American hyper- and photo-realism, the masters of Italian neo-realist cinema and the aesthetics of Pasolini, Bunuel and Andrei Tarkovsky. For many contemporary artists the 20th century's avant-garde visual legacy has degenerated into a sickly-sweet handful of Hollywood special effects. Unusually, Khudyakov attempts to combine it with 19th-century Russian psychological realism. His work combines computer graphics techniques with methods inherited from Ge and Kramskoi.

Khudyakov's interpretation of the Russian icon is not canonical: those seeking to find harmony and enlightenment in "Deisis" will likely be disappointed. It has none of the tranquil beauty we value so highly and which, in the Orthodox tradition, has been associated with true faith since the times of Andrei Rublev. We are forced to bear witness to the harsh spiritual experiences which racked the figures of the Scriptures. This likens Khudyakov's characters to Kramskoi's "Christ in the Wilderness" and the Christ of Ge's evangelical paintings. To be in the presence of figures from this modern Iconostasis is hard - for some, indeed, unbearable. The viewer is forced to share the burden of their life's work: the spiritual quest, the passions and the doubts. At the very least, each of us will have to face some difficult soulsearching - not unlike the characters of Tolstoy, Dostoyevsky, the Wanderer (peredvizhnik!) artists or, in a more recent example, those of Pavel Korin's "Vanishing Russia: A Requiem”. Musing on Korin, one outstanding critic observed: "...as the characters reflect on life, we, the viewers, begin to reflect also. What a good thing this is, and what a long-forgotten feeling!"

Naturally, Abram Efros did not intend to foist his own artistic taste on the Soviet public. His preference was for art of a different kind, from another era. He was merely drawing the reader's attention to an artistic event, which appeared not only significant, but also utterly different from the mass aesthetic efforts of early Socialist realism. In those days many wished to believe, and the authorities to convince the people, that they - "we" - "were born in order to make a fairytale come true". The only way to inculcate this belief was by annihilating inquisitive thought, suffocating analytical consciousness, and proclaiming all intellectual and spiritual pursuits hostile to the Soviet way of thinking. In those days the intelligentsia was usually referred to as "rotten"; the portrayal of wise old age was bound to elicit the threatening verdict "not one of us", and the image of "our own son today" conjured up visions of innocent youth, a pure tabula rasa as yet unmarked by the history of humanity. Very few in the Soviet Union dared to admit openly that this policy could lead to the degeneration of the population. Hence, the hidden pathos of totalitarianism: perhaps only Goebbels's phrase, "Whenever I hear the word 'culture' I reach for my gun!" truly exposed it. Efros's daring comment on Korin at the "Artists of the RSFSR over 15 Years" exhibition revealed the true state of affairs, and resulted in the critic not being published for a long time afterwards. In its fight against Bolshevik totalitarianism, contemporary Russian society has also sacrificed culture to a significant extent. One "pertinent" art figure claims that talk of culture and eternal values makes him want to "stock up on root crops". It seems this thinker is seriously concerned by the dominant role of culture in the new Russia; in this situation, it is perhaps irrelevant whether or not Khudyakov's computer graphics represent the realization of an aesthetic dream. What matters is that the moral and philosophical questions they raise are today of the utmost importance to Russia.

From an artistic point of view, however, a key issue for the creators of "Deisis" is that of stylistics. As if following the psychological approach adopted by Ge and Kramskoi, they make the figures of the Scriptures come alive, and seem more human. Yet this is not in itself the crucial point. In terms of appearance, their work does not appear to follow that of Ge or Kramskoi - perhaps because for them, painting is not the main instrument in the creation of visual form. The trio are in fact developing a principle which was of tremendous importance in the arts of 19th-century Russia: they are attempting to reach the hearts and minds of their viewers through the personification of biblical figures and concrete historical definition of the experiences related in the Holy Scriptures.

This form of vision was already apparent in Renaissance art. Yet in 19th-century Russian painting and literature it engendered particularly radical, systematic and distinctive developments. Essentially rooted in scientism, this investigative concrete-historical approach is a documentary method of constructing an artistic hypothesis. This exact method produced the striking phenomena of Russian psychological realism represented by the portrait sketches of Alexander Ivanov and other artists right through to the Wanderers, as well as the unforgettable novels of Leo Tolstoy and Fyodor Dostoyevsky.

The creators of "Deisis" strive to reach their artistic goal through the exact portrayal of the feelings, and historically-authentic life situations, of their characters. This is achieved through the use of two techniques: the first uses photofixation and computer modelling of an image obtained from a photograph of a particular person; the second involves the meticulous reworking of this image in accordance with all the his torical data obtained by modern science from the Holy Scriptures. In other words, "Deisis" recreates the life stories of characters from a particular historical chronicle. This is the task of the ethnographist, historiographer and cultural specialist Roman Bagdasarov. After the historical biography has been obtained, Konstantin Khudyakov then gives it a human face by computer editing of vast numbers of fragments from life portraits obtained by digital camera. In essence, this process is similar to Alexander Ivanov's method of collating sketches, whereby the artistic genius examines dozens of portrait studies together with the historical findings available in his time.

Thus, the philosophical, moral and religious experience of Christianity is actualised - or introduced into the consciousness of present- day society. It's interesting to note that Russian art from the second quarter and last half of the 19th century pursued the same aim. This very objective is also present in certain strands within 20th- and even 21st- century art. And this is why the "Dei- sis" project appears so pertinent for the Tretyakov Gallery: "Deisis" could be called a spiritual forerunner of the search in which contemporary Russian art is engaged today. 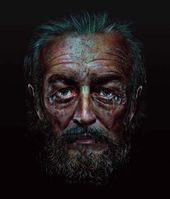 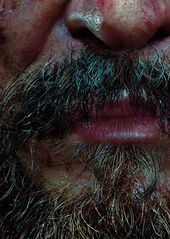 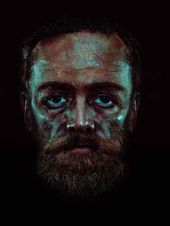 Nicholas the Second from DEISIS project