"Historical Surrealism" is a unique phenomenon in the art and culture of the 20th century. It strived to create a new mythology, and managed to change and broaden both human perceptive abilities and forms; its impact on evolutionary changes in art cannot be overestimated, while it anticipated the emergence of both the "trans-avant-garde" and the most recent post-modernist movements. The recorded history of surrealism lies in the period from 1924 to 1968: from the "Bureau of Surrealistic Research" and the publication of Andre Breton's "Surrealist Manifesto", to the "Prague Spring" - at least that is how it is defined by Alain and Odette Virmaux. In their encyclopaedic study Les Grands Figures de Surrealism they wrote: "Surrealism, as no other trend of art had, undoubtedly, a great impact on the history of the 20th century. A few subsequent generations, having crossed the 'border line' of 1968, absorbed its lessons around the world." There is considerable evidence of this in the creative efforts and achievements of Russian artists - painters, sculptors and graphic artists, who in no way are feeble imitators, "epigones", unconditional followers of surrealism or bearers of the surrealistic postulate. In the case of the Russian artists it would be wrong to speak about any direct influence and impact of the concept of "pure psychic automatism", "paranoiac-critical doctrine" or any other such attributes used in the analysis of surrealism. Of course, there are certain links with Salvador Dali, Marcel Duchamp, Rene Magritte, Paul Delvaux, Victor Brauner, Man Ray, Max Ernst and Joan Miro in the works of a number of Russian artists of the post-War generation; however, this says nothing about any direct connection with the surrealistic tradition on their part. On the contrary, it is evidence of the independent character of the origin of such a phenomenon. Some particular works of art of such Russian artists as Alexander Rukavishnikov, Sergei Sharov, Andrei Kostin, Oleg Safronoff or Igor Makarevich are the best examples of such a special alien "parallelism", which arose independent of visual associations and comparisons constructed by art-critics. The creative activity of each of these artists is absolutely individual - and thus very far from general collective tendencies. At the same time, many talented and respected Russian artists are developing and following certain surrealistic ideas, principles and canons, a fact that in no way belittles their personal creative results and achievements. Among them are Genia Shef (Sheffer), now settled in Berlin; Victor Krotov, who divides his life between Moscow and Paris; Sergei Chaikun, Sergei Potatov, Igor Kamenev, Mikhail Gorshunov, Alla Bedina and the recently-discovered Max Haase (1938-1998). 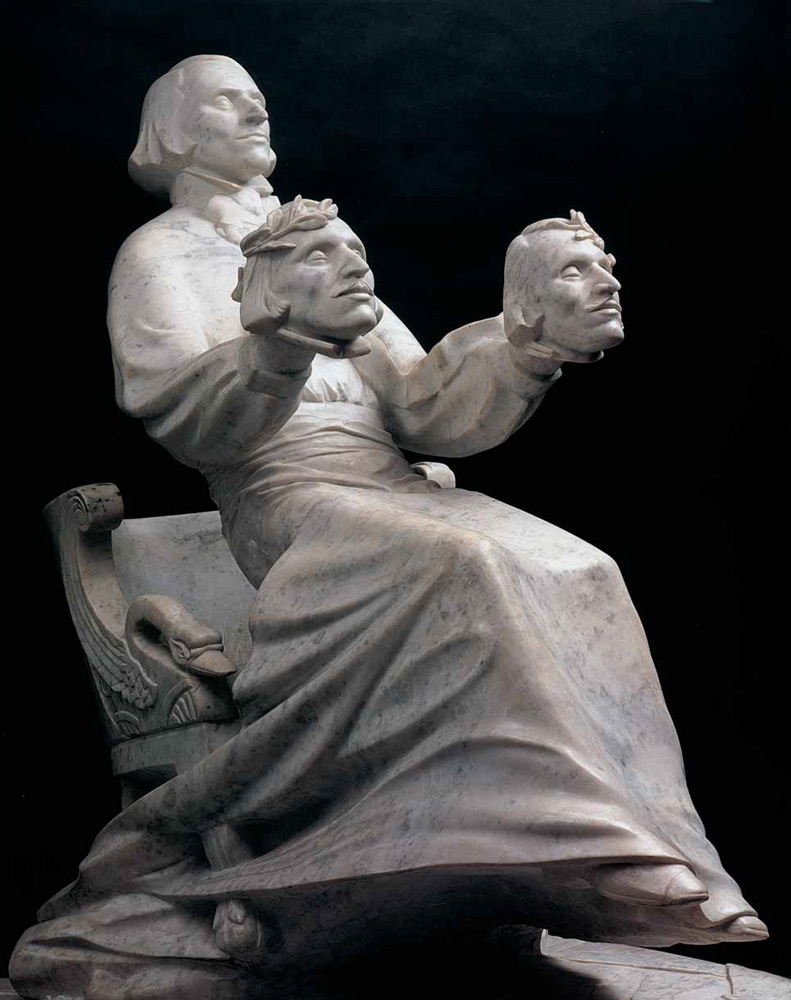 A certain inclination towards phantasmagoria, mystery, buffoonery and to some kind of gameplay allows the critic to speak of the surrealistic vision of Alexander Sitnikov; the works of Valery Vradii are somehow connected with surrealism, as are those of Vladimir Lobanov, although in an absolutely different way.

One can find very many brilliant examples of surrealism in Russian literature, in the works of Nikolai Gogol, Mikhail Bulgakov and Daniil Kharms. Thus, literature might be the source of the interpretational pluralism, one which nurtured the development of surrealism as a historical Russian national phenomenon. 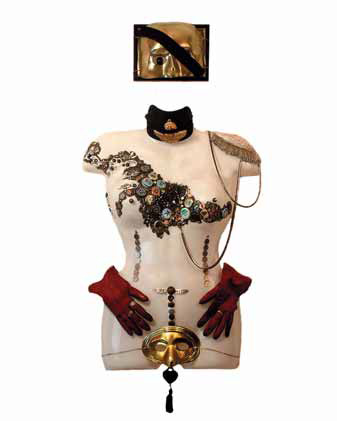 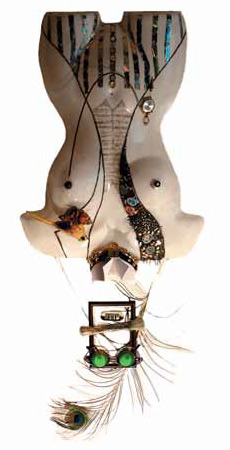 Unlike those foreign artists who cultivated different aspects, themes and modes of "historical surrealism", the Russian surrealists are led by different emotional-semantic dominating ideas and associative links. Brutality and aggression, an integral part of the metaphysical and occult imagery in the works of the Western artists from this trend, are virtually absent in the works of the Russian masters, in whose surrealistic thinking other subconscious motivations, emotions and foresights dominate. Their sacral meta-psychosis is connected with a particular romantic sensitivity and a special kind of intuitivism: one can mark certain dramatic metamorphoses in the works of the Russian surrealists, which give another confirmation of their readiness to sacrifice not for the sake of - but rather against - the mutation of the spiritual consciousness, the destructive pathos of an aggressive resistance to everything. Russian surrealism implies more sentimentalism, self-torture and estrangement than an instinctive obedience of everything and everybody to some "super-task". The "play culture”, and the metaphoric and grotesque character of Russian art injects the surrealistic strategy with an additional touch of sensitive expectations and dreams, and some passive estranged contemplation that does not exclude spontaneous courage and devilishness.

As the French literary critic, semioticist and philosopher Jacques Derrida stated: "There is no literal meaning, its 'appearance' is a required function, and it should be analyzed as it is within the system of differences and metaphors.” These words may refer more to the analysis of literary texts, but nevertheless in our case a linguistic, philosophical and literary methodology can be applied towards a better understanding of the heritage of surrealism, and become a key tool in the interpretation of the works created by its founders and followers.

The words of Salvador Dali, the centenary of whose birth is celebrated internationally this year - a great mystifier of the myths and reality of 20th century art - also deserve mention: "... when the Renaissance wanted to imitate Immortal Greece they received Raphael. Ingres wanted to imitate Raphael, and became Ingres. Cezanne wanted to imitate Poussin, and became Cezanne. Dali wanted to imitate Meissonier. And he became Dali! Those who do not want to imitate became nobody. After pop-art and opt-art, art pompier will appear, but this kind of art will be strengthened by anything valuable and with any - even the most crazy - experience of the great tragedy that is called 'contemporary art'."

Surrealism as a new phenomenon of art and culture has become a logical continuation of dadaism, of the search for a particular meta-language through the use of which one could find an explanation, or analysis, of the other - figurative - language. One of the main historical services of surrealism is that the ideas formulated by its ideologists were adopted by outstanding poets and artists, film-makers and musicians - all those who personify the great epoch of the 20th century Sturm und Drang, namely Tristan Tzara and Antonen Arto, Philippe Soupault and Andre Breton, Andre Suris and Luis Bunuel, Andre Masson and Alberto Giacometti, Hans Arp and Eric Satie, Yves Tanguy and Pablo Neruda, Francis Picabia and Pablo Picasso, Paul Eluard and Suse Takiguchi, Salvador Dali and Rene Magritte, Max Ernst and Man Ray, Wilfredo Lam and Paul Klee. These great personalities remain ever-living symbols of the 20th century, who managed to globalize their own egoistic individualism. Great Russian artists, such as Vasily Kandinsky, Marc Chagall and Pavel Filonov - though not directly connected with the surrealist manifestos - can be included in their ranks, too. "Something that was not born from within," wrote Kandinsky, "is still-born." This thesis once again affirms the viability of surrealism as a timeless phenomenon - as if the whole of "avant-garde art" is nothing but an intellectual game without rules. 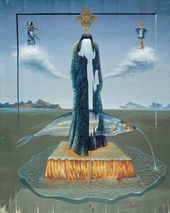 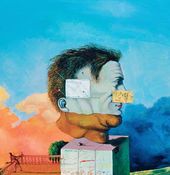 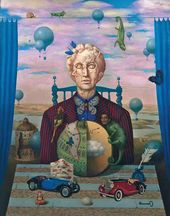 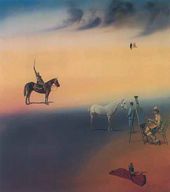 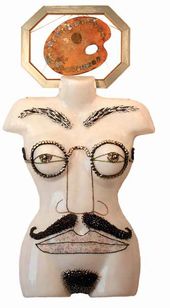