The very concept of American art in the 20th century brings a splash of emotions associated with the likes of Jackson Pollock, Claes Oldenburg, Andy Warhol, Mark Rothko, Robert Rauschenberg, James Rosenquist, and George Segal - the masters of abstract impressionism, pop-art and hyper-realism.

However, American art in its full diversity is not limited to these great names: to my mind, Edward Hopper and } Andrew Wyeth are the most "American" - in both spirit and individualism - of the artists of the past century.

The retrospective exhibition of Edward Hopper (1882-1967) which will run until October 2004 in the Tate Modern Gallery, London, is another chance to raise such intuitive speculations.

Hopper's artistic credo was formed in the period of the Great Depression. His paintings and graphics mirror the state of American society of that period, and in addition his art quite naturally echoes the varied pathos of Robert Frost's poetry, Tennessee Williams' drama, Nathaniel West's prose, and the philosophical background of novels by J.D. Salinger and Kurt Vonnegut. With Hopper, one can note some motifs close to those of Edgar Allan Poe - at least in their perception of life. Of course, every researcher of Hopper's work and heritage has his or her own reminiscences and analogies.

Hopper's language, though laconic, provokes the imagination of the viewer, stimulating diverse emotions and associations. His realistic perception of the subject and object is coloured with a kind of romanticism, and the artist transforms the images in his pictures according to his own understanding of the dramatic collisions of life, and of the inevitable conflict between the individual and society.

Hopper had a real gift for artistic generalization - for being able to turn a certain episode or a particular case into something typical. Though devoid of pathos, his everyday genre scenes - private and intimate, and seeming to aspire to nothing special - gain psychological depth and social significance. There is no vivid action in his paintings, just quiet and still miseen-scenes of the play in the life of "quiet Americans". Hopper's subjects seem to be in a state of meditation - he achieves this by the vivid absence of any signs of action, and a no less vivid contemplation, alongside an indirect imaginary form and his absolutely personal interpretation of the subject. The feelings of anxiety and loneliness, so typical for his characters, play - apparently - the role of a kind of alternative to the glamour of the American life style. Hopper explores the philosophical categories contradicting the lay-man's attitude to the realities of the contemporary world, to the moral and ethical values of human existence. His genre scenes are coloured with a genuine psychological fleur, originating in a process of spiritual search, which realize peculiar and typical traits of the national character; they are taken not as a whole abstract essence, but as the fate of a particular human being. Though bearing some special individual personal images, Hopper's characters personify the emotional status, thoughts and feelings, and the conflicts and ideals of a whole generation.

The artist is a brilliant example of a master of genre scenes and dramatic metamorphosis, as well as a comprehensive psychologist. Hopper's unique talent reveals itself in his special philosophic perception of life, alongside a professionalism of a really high standard, an absolutely individual manner of painting and an acute sense of aesthetics.

Hopper started his career as an illustrator, and did not achieve his artistic individuality immediately. The artist experienced some positive influences from his environment and people, to say nothing of his sharp mind and the fact that he was "possessed" by art, having been critical to his own artistic achievements. At the very beginning of the 20th century Hopper made a number of trips to Europe, where he saw the works of the Old Masters in the museums of France, Great Britain, Holland and Spain. This experience, and the opportunity to come closer to new tendencies and movements in the development of European art, stimulated the creative evolution of the artist. Hopper began to study art seriously: Impressionism, experimental experience of metaphysics and surrealism, and some other avant-garde trends in the art of his days - all proved interesting to his keen artistic mind. Never one to copy or imitate, Hopper very accurately analyzed and applied some of the formal discoveries of modernism.

Naturally, one can find in Hopper's art some traces of influence from Parisian and other European masters such as Eduard Manet, Maurice de Vlaminck, Pierre-Albert Marquet, and also Giorgio de Chirico, Rene Magritte and Max Ernst, though this observation speaks only of the widened range of his creative attempts.

Edward Hopper eagerly exploits light as the main means of his imaginary expression. He skilfully applies the effects of a special light setting to reveal the most complex emotional status, determining the fore- and backgrounds, and limiting the space of the two-dimensional canvas. The play of the contrast of "light versus shadow” brings special force to the colour, builds the particular light and air medium, and forms numerous meaningful intonations, dramatizing the contents of his paintings. The light models the form and brings a plastic shape to the image. Hopper uses a very modest palette - some main and some additional colours, but the nuances are really rich. A renowned master of stage effects, Hopper always seeks and finds the most suitable foreshortening to strengthen the emotional impression of his works. Various formal means in his artistic self-expression, developed over decades, became part and parcel of Hopper's highest professionalism and his inimitable style.

The paintings of one of the great American artists, such as "Sunday" (1926), "Compartment C, Car 193" (1938), "Office at Night" (1940), "New-York Office" (1962), "Night Windows" (1928), "Nighthawks" (1942), "Summertime" (1943), and Hopper's last painting finished a year before his death - "Two Comedians" (1966) - alongside some other masterpieces that are on show in London are classic works of American and world art of his epoch. Hopper's bright talent, and his devotion to realism made him evidently play the role of one of the "most American" artists together with such masters as Thomas Hart Benton, Grant Wood and Andrew Wyeth. Edward Hopper's figurative art appeared to foresee some new tendencies of post-modernism, and made a serious contribution to the process of the development of art. Finally, it proved how actual creative activity is one in which - regardless of the nano-technological era - there is always a place for human emotions and reason. 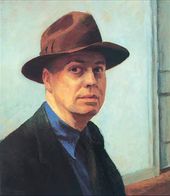 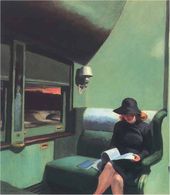