London's National Portrait Gallery was founded in 1856 to collect and exhibit portraits of outstanding British individuals, whose contribution to the nation's history and culture is beyond doubt. The museum's collection now includes more than 12,000 works with paintings, sculptures, graphic works and photography. Its remarkable collection is constantly being enlarged, one of a number of ways being the "Portrait Award", well-known both in Britain and internationally.

This year's award was the 24th of its kind, and the 14th organized with the support and sponsorship of British Petroleum (BP); the aim of the annual competition is to encourage and promote the work of young portraitists, with artists from all around the world, aged from 18 to 40, eligible to take part.

This year the works of the competitors and winners were exhibited at the National Portrait Gallery, London from June 17 through to September 19, and will later travel to the Royal Albert Memorial Museum, Exeter (October 2 - November 13), Aberdeen Art Gallery (December 4- January 22, 2005), and the Royal West of England Academy, Bristol (February 27-March 26, 2005).

The invention of photography made pessimists predict the gradual death of painting, and the inevitable death of the genre of the portrait. Such predictions have never come true, even if at the beginning of the 20th century the renowned art critic Sergei Makovski called photographism "a persisting sore of art”.

This "sore" still spoils the image - or, to be more exact, the faces - of the sitters depicted in the portraits nominated for the prestigious BP award and exhibited at the National Portrait Gallery. The viewer cannot but note that most of the artists - at least no less than 40 out of 54 - are haunted by the images and means of other kinds of art, especially that of photography, even if photography has gained international fame for Britain over the previous decades. So evident a dependence on photography is characteristic of the current condition of the portraiture of the once leading British art school, typified by the works of artists like Thomas Gainsborough, Sir Thomas Lawrence, Sir Joshua Reynolds and James McNeill Whistler. We bear in mind, too, that when Thomas Carlyle exclaimed to Whistler "Shoot!", he did not mean a "photosession"...

Another characteristic of a number of the portraits in the exhibition is the apparent "cultivation" of an aesthetic of ugliness. The idea of "beauty to be found in the horrible" which was so brilliantly achieved in Leonardo da Vinci's sketches of old men does not apply to the works here. Rather, one might paradoxically describe the contemporary situation with Oscar Wilde's expression: ".real beauty ends where intellectual expression begins. Intellect is in itself a mode of exaggeration, and destroys the harmony of any face. The moment one sits down to think, one becomes all nose, or all forehead, or something horrid." Such a striving towards morbid deformation and the destruction of harmony, without the power of Francis Bacon's talent or the buffoonish sedition of Damian Hurst, looks like a thoughtlessly- adopted algorithm which, in the case of its young interpreters, loses both aesthetic value and the power of the original.

Blake Morrison, whose stylish essay "Portraits" opens the catalogue of the exhibition, begins his foreword with a symbolic allusion to the art of the Netherlands of the 15th century, and in particular of Hans Memling. It is only appropriate to mention in this context one of the best of the works exhibited, Maeve McCarthy's "Self-portrait". In Memling's portrait the young man is depicted with a Renaissance mentality, one in harmony both with himself and the world: the blue skies form a background - a macrocosm, both absorbing and digesting earthly desires. Full of anxiety and sharp thought, Maeve McCarthy's eyes express a contemporary glance and attitude. The green background reflected in the artist's large and expressive eyes becomes a symbol - a faraway Universe, a cosmos in which real life is everywhere, a sense of a life that is tightly connected with everybody else alive. All the classical allusions to be seen in McCarthy's "Self-portrait" do not draw on some feeling of "something secondary"; on the contrary, they add to this image, creating an up-to-date, dynamic and stylish result - a valuable experience, which understands the essence of the great traditions of Dutch portraiture.

The event's major prize was rightly awarded to Stephen Shankland for his work "The Miracle”. Even for a viewer who knows nothing about the touching story of the artist's wife who is selflessly struggling for the life of her sick child (they are both depicted), this portrait absolutely attracts attention for its high artistic level. Full of sincerity, noble dignity and restraint, the portrait is made with a full, typical British mastery in depicting touching subjects.

The decision of the jury to award this work was exact - the choice confirms the aim of the competition, and regards the award as a factor to support the development of the national tradition of portrait genre. From a stylistic point of view, on the one hand, Shankland's work undoubtedly belongs to the well- defined British school of portraiture. On the other hand, the subject depicted by the artist, though personally deeply-felt, goes far beyond the fact of any particular biography: the theme of maternity appears both eternal and inexhaustible.

"Who are we, Britons?": such is the question addressed to the nation on each morning's breakfast news on TV, and it is echoed in the most interesting portraits to be seen at the exhibition.

The works of the Ukrainian artist Ulyana Gumenyuk, though still raw and unskilled, won a special British Petroleum award - a professional trip to Russia and the Ukraine. In this case the choice of the winner is perhaps less important than the very fact of such an award, one which promotes educational trips for young artists at the beginning of their professional career. 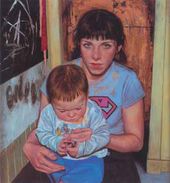 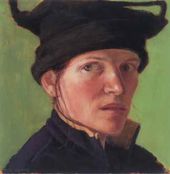 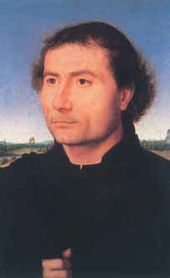 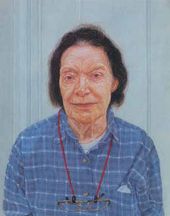 Fergus MAYHEW. Head Full of Smiles
Acrylic and oil on board. 468 by 382 mm 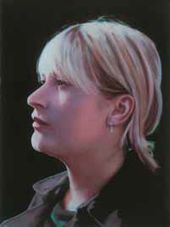