Graphic art, as perhaps the most mystical of the fine arts, reveals like no other form the lurking beat of the artist's heart. Achieved in a flash of inspiration, a sketch rejects the very idea of any gradual elaboration or further perfection, any varnishing, embellishing, second thought or resolving effort. It is touch-and-go - God's momentary pat on the hand - or the kiss of an angel.

And here is the result, directly before the viewer: the precious evidence of the master's intimacy with God, at a moment when his love for Him is met with response.

Michelangelo's heritage consists of works of art that are colossal in their scale. Today, when we come to look at and venerate the fruits of his divine labour, we feel like pygmies in comparison. His immense, almost infinitely broadening, ceiling and wall frescoes for the Sistine Chapel, or the breathtaking giant marble statues strike anyone with their enormousness, and the sheer "Brobdingnagian" character of his titanic work.

But among Michelangelo's prodigious legacy there are also some priceless small pieces of paper, complete with pen-and-ink sketches, which actually comprise the gist of the revelations of the genius; these drawings were actually not meant to be works of art in the sense accepted for such terms in the 15th and 16th centuries. Instead, they register the birth of an idea of a future work of art -and, as such, were destined to be cast aside, treated as some "discard", something "in-between", to be used only in an applicative way; a kind of spadework, the inevitable waste that any creative work entails. But such "rubbish" was also supposed to be the kind of "blue ground" which produces the shining diamonds of a real masterpiece. For the artist himself, these pieces of paper often carried a certain mystic charm, because it was on them that he actually saw his future creations for the first time. Examining the sketches, the artist met the eyes of the Creator who had blessed him with talent, and was watching the master's work approvingly - or disapprovingly.

All of this may explain why true connoisseurs tend to look on Michelangelo's sketches with particular interest: some time would pass before he would paint his famous murals, and the world would marvel at the singular eminence and grandeur of his works, while these drawings, both piercingly true and intense in their simplicity, witness something far more eloquent.

Fot that reason, the works displayed at the Albertina Museum in this historical retrospective make the collection unique among counterparts in other countries.

There is no doubt that European graphic art derives from the classical vase-painting tradition that laid the basics of its principles, techniques and materials; first among them was monochromatic and linear drawing, with further inclusion of tones and overtones to give relief to the pictures. Thus, vase-painting paved the way for painting. Through adding colours and light and shade it started to flourish, progressing beyond the two-dimensional surface of the sheet of paper. What was appreciated most in classical painting was the illusion: the grapes in the picture looked so real that they would attract flies; the curtain, seemingly thrown over the picture, turns out to be impossible to remove. Such wonderful achievements, however, were nothing more than the tricks of the trade: two or three hues of tone, a line, a shadow and an overtone.

The striking sensation of a third dimension was in no way achieved by following the artist's possibly chaotic imagination, or through a careful imitation of nature - but by observing the strict rules and combination of the techniques concerned.

In the Renaissance, drawing assumed and developed the classical traditions; the use of toned paper, line, two or three tones and void intervals that helped to create the illusion of dimensional relief were the most common devices of artists' imagery. The sketches of Michelangelo and his contemporaries are all based on that principle: effectively, they are monochrome. The colour effect is usually achieved by contrasts in the tone of the materials: sepia ink, charcoal sticks, scratching with strands of silver, heightening with sienna or umber.

The Old Masters were, of course, seeking a way to give relief to their paintings, but they confined themselves to the traditional symbols of three-dimension drawing, returning to exclusively classical techniques and black-and-white monochromatism. Two or three techniques prevail in the drawings of that period: varying shades of natural black and brown pen-and-ink, red- or sanguine-coloured or black chalk on various sorts of coloured ground. Some drawings demonstrate a more complicated combination of techniques, such as coloured wash or white and coloured heightening with a brush.

The Michelangelo drawings at the Albertina are mostly made in delicate light sanguine and pen-and-ink - and one of them, a figure study of a nude boy for the Sistine Chapel ceiling is, by any judgment, a masterpiece of which the Albertina can be proud.

It should be noted that the nude figure study is a specific genre typical of the great Italian Renaissance masters. Michelangelo was known to excel in anatomical details: he was able to show the harmony and vital force of the human body, the natural beauty of the muscles, in the depiction of which he was unrivalled. Michelangelo's profound knowledge of the interactive functioning of all parts of the human body made his drawings from nature a kind of model design for the three-dimensional representation of man on paper. The drawing in question, however, demonstrates a quality that singles it out from the rest of the collection, displaying a unique sensation of the third dimension which is so striking, that it makes other of Michelangelo's pictures look like collages in comparison. It actually heralds principles which are not to be found in European art before the late baroque. This figure study leaves an impression so deep and lasting, that it relegates drawings by Raphael exhibited in the same room to the position of scholastic routine, devoid of the magic aura of divine art. Perhaps only one small sketch by Leonardo, drawn on blue paper, in Leonardo's inimitable sfumato, equals this masterpiece of Michelangelo.

Moreover, this sketch looks unusual even for Michelangelo himself because it is his only drawing that shows the huge potentials of three-dimensional graphic representation that would later be developed by the great masters of the Venetian school and by Rembrandt. The sketch looks so true to life not for its perfectly disciplined pen technique or luckily-found form, but for the absolutely new aesthetic principles of picturing three dimensions on the two-dimensional sheet of paper; with that single achievement, Michelangelo managed to glimpse ahead to a future era of art.

It was only at the time of the High Renaissance that drawing began to be viewed differently, as a separate art in itself. In previous periods its role was far from independent, as compared to that in the Middle Ages when drawings were used for book illustration or popular pictures. In the days of Michelangelo the church did not yet treat drawings as a means of decoration: they served instead as a preparatory stage in the creative process - its most mystic part, perhaps, but not its ultimate goal. As Leonardo put it: "All art stems from a sketch".

The Renaissance encouraged resolving the process of creation into its elements, and drawing became recognized as a pivot - for the first time in history, it became independent. While there were individuals who could draw fairly well even in ancient times, drawing became an art only in that period.

Thus we can enjoy and marvel at these "utility" sketches by the great Michelangelo and other titans of his time, masterpieces destined in their time to gather dust on the shelves of the artists' studios. They constituted personal supporting archives, at the same time as they are now understood as the most important element of their craft; consequently, they have become very tempting both for other artists and for collectors.

The collections of sketches belonging to Peter Paul Rubens, Giorgio Vasari, Antonio Raimondi and Benvenuto Cellini are well-known. While the rich and mighty used to collect works of art - paintings, sculptures, jewellery - artists and intellectuals preferred to collect such "doodles", and the sketches of such past masters were cherished as peerless treasures.

"Michelangelo und seine Zeit" is the name of one such treasure. It brings the viewer into the testing laboratory of experiments by geniuses whose inner creative ideas and imagery are esoteric. Our appreciation of an artist is usually based on the strength of his creative potential: looking at these small drawings we are left in no doubt as to which of them is the most prodigious talent. Even if from all the huge heritage of Michelangelo only this tiny figure study of a nude boy with knuckled knees had remained, originating as it does from the Rubens collection, the answer would have been obvious: it is Michelangelo Buonarroti the great martyr of Florence, who deserves the title of "Artist of All Times". 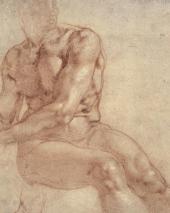 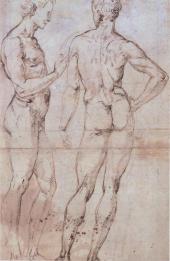 RAPHAEL. TWO FULL-LENGTH STUDIES OF MALE NUDES: ONE – SIDE VIEW, THE OTHER – BACK VIEW
Pen, brown ink, drawing with lead on paper. 46.5x32 cm 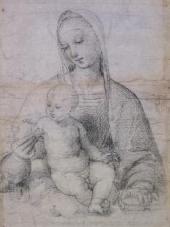 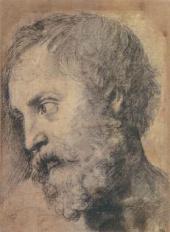 RAPHAEL. STUDY FOR THE HEAD OF APOSTLE FOR THE FRESCO “TRANSFIGURATION”. 1519-1520
Black chalk over a drawing with lead on paper. 24x18.2 cm

RAPHAEL. SKETCH FOR THE CARTOONS FOR THE SISTINE CHAPEL TAPESTRY "THE MIRACULOUS DRAUGHT OF FISHES". c. 1515
Pen, brown ink over a drawing in chalk on paper. 22.9 . 32.7 cm 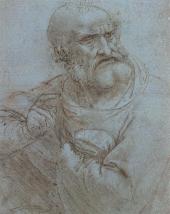 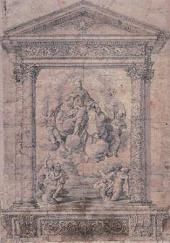 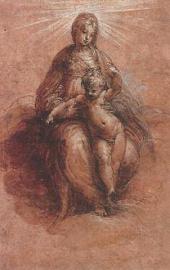 PARMIGIANINO (FRANCESCO MAZZOLA). MARY IN THE CLOUDS WITH THE CHILD. SKETCH FOR "VISION OF ST. JEROME". 1526-1527
Pen, brown ink, traces of black chalk, brown wash and heightened with white on paper. 20.4x13 cm 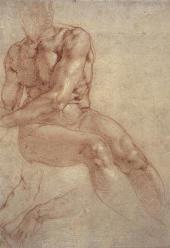