LOUISE BOURGEOIS: THE ONE WHO IS NOT AFRAID

The “Tretyakov Gallery Magazine” and Garage Museum of Contemporary Art have been collaborators since the latter’s opening, with articles on the shows of Antony Gormley and Mark Rothko, and the exhibition of works from Frangois Pinault’s collection appearing in these pages. Co-editor Natella Voiskounski met with Garage Chief Curator Kate Fowle recently to discuss Garage’s Louise Bourgeois exhibition - one of the major events of the past exhibition season, which introduced Moscow viewers to the artist’s works from the last two decades of her life. Bourgeois was among the very few artists who represented both modern and contemporary art - she belonged to the 20th and 21st centuries equally, both chronologically and artistically. 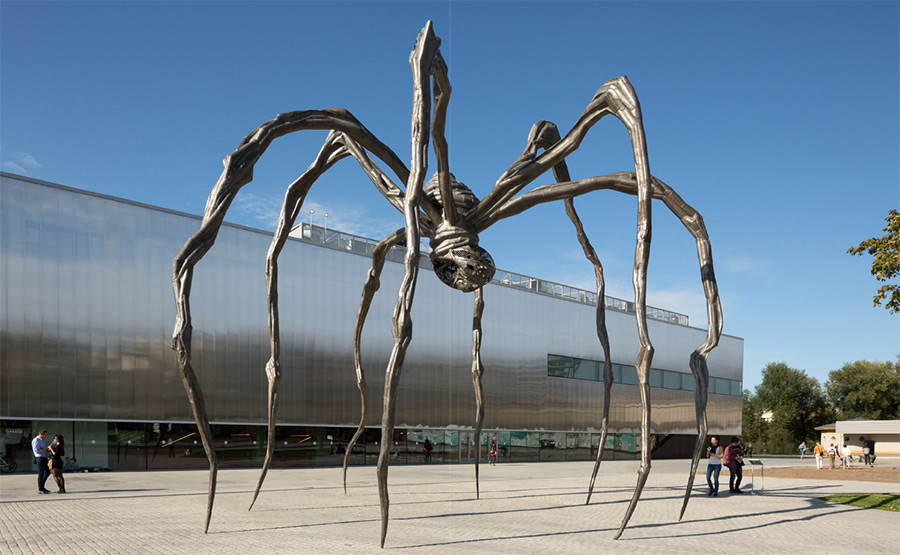 Natella Voiskounski: Kate, we have decided to talk about Louise Bourgeois, discuss things that were not included in the press release, and perhaps focus on her role as an artist connecting modern and contemporary art. There are few artists who have made a work that people around the world know even before the artist's name. Everybody knows "The Scream", yet not everyone will know it was made by [Edvard] Munch. The same can be said of Bourgeois' "spiders".

Kate Fowle: Yes, that's an interesting point, as well as the fact that she's a woman. A world-famous female artist...

NV: When I was looking for a title for the article, one that would hook the reader, I thought of calling it "The One Who Is Not Afraid".

KF: That's a great idea, because she really wasn't. There's a film about her called "The Spider, the Mistress, and the Tangerine", which we recently translated into Russian, and it's very interesting to watch her speak. Whatever she says, she always has her own opinion. Where shall we begin?

NV: Let's start with the general issues: her place in the history of art, somewhere between modernity and contemporaneity. Speaking of ambiguities, the title for the exhibition in Garage works really well in Russian: the cell can stand for a room in a prison and for the basic unit of any living organism, including human. Different meanings create a poly-semantic whole.

KF: Yes, it's always hard to pin down. Modern or contemporary? What is her place in the history of art? I think she could do what not many artists can: she belongs to both! Her early works were so significant that they could not simply be obscured by what she did later. And what makes her contemporary was already there in her works of the 1940s. She has connected the two epochs.

NV: And it took time for her art to resonate with people.

KF: Very few people wrote about her until the 1980s and 1990s. The first book on her art was published in 1982, and it was an important moment for her.

NV: Did it come out after the exhibition in MoMA?

KF: It did. I believe she was fully aware of the fact that her art was purely visual and needed no words. Perhaps her modernist connection contributed to this as well. When you see her working in the film - working in a contemporary situation, as she prepares the project for Tate Modern - you get a feeling of timelessness. Her approach was classical in a way - think of her steel towers, "I Do, I Undo, I Redo".

NV: Classical yet fresh. Her giant spider made in 1999 was very much of its time and place - it belongs to the turn of the century - and at her age she made something as conceptual as the works of the YBAs [Young British Artists]! She does not only belong to both epochs, but to different generations! She felt the need to make her works ever larger to change the way we see them and stress their significance.

NV: As if she was finally ready for it.

KF: As if she had done everything she could for her family and started doing what she could do for herself. This was also the time her assistant Jerry Gorovoy started working with her. He was just out of art school, and she was 68, and he often told me of how she would regularly go to the cinema and to the theatre. She had very few friends of her own age. Maybe she was able to connect with different generations because she was always interested in what people thought and talked about. She had several rules: people could not come up to her and ask how to get an exhibition or become commercially successful; they could only get her to discuss ideas. If you listen to her speak - even to journalists - she's always explaining herself. She was always in a reflexive mode.

NV: Let us return to the exhibition. The "Cells" can provoke some medical associations; operations, illness, death - I think only a woman could speak of this so openly. Love and compassion are present there in an abstract form. She chose to express emotions, be they happiness or despair, in gestures.

KF: I agree, not only openly, but honestly. She was not afraid of showing her emotions - and they were not necessarily pleasant or decent ones. This is what made her a woman: she was bold enough to show the extreme.

NV: She was indeed a master of mixing the attractive and the repulsive, as this exhibition proves.

KF: She wrote of this element of attraction, which is especially obvious in the "Cells", because the cells protected her works and her ideas. When she was over 70, she was invited to take part in "Carnegie International", a large group exhibition, and she decided to make an environment that could contain everything she had to say.

NV: Perhaps what she tried to do with the "Cells" is create borders within which there would be no borders. How do you express yourself without drawing the line?

KF: It was also a way of protecting her works from any intervention of the museum space. At this stage in her life she wanted to be very clear about what she had to say.

NV: To me, the mood, the emotion in all of her installations is very clear, you cannot mistake it for anything else. Just like in music, you can easily tell a sad melody from a happy one. Some of the objects we see inside the cells are readymades, some she made herself, but what really matters is the way she has put them together: she has created a scene.

KF: What is interesting is the way she drew on her own experience, her life, her misery and joy to make artworks that were universal, but not impersonal.

NV: Did you look at how the audience reacted to the exhibition? Were people moved or were they perplexed?

KF: Yes, we made a survey and the results were intriguing. A lot of people have pointed to the psychological aspect of her work. This is important, as contemporary art is often associated with something fleeting, flashy and joyful, while we are trying to show how it is informed by history.

NV: Let us talk of how Louise Bourgeois has changed our understanding of art. Since the launch of its education programme, Garage has been introducing people to the key contemporary artists, showing that their works are just as serious and significant as those by modern and old masters.

KF: You know, her son came to see the exhibition and he was crying. He said he had never seen his mother's works exhibited in such a wonderful way. Her assistant said something similar. The reason is our space is much closer to a studio space than the white walls of most museums of contemporary art. Garage was conceived as a museum of the 21st century, where artworks don't have to be exhibited in a white cube, and Bourgeois' works are very reliant on architecture.

And the last thing I'd like to mention: in 1993, Ilya Kabakov had his first book published in English. And Boris Groys asked him, "How do you think people in New York will understand your works?" Kabakov said that in Russia, people are only concerned with the content of the work, and don't care so much about the form: it's all about texts, conversations, ideas. And they were talking of how in America, people did not necessarily get the content, but they got the form. Kabakov was talking of making the content in his works more universal, and so he did. Look at his works of the 1990s and 2000s - they are more universal. And look at Bourgeois' works of the same period: she reinvented herself. In 1993 she started making her spiders. Both artists started making large spectacular works in their mature period.

NV: Contemporary art is more formally logical... Louise Bourgeois rejected logic in art. Her art came close to life, which is often illogical. She chose her path and followed it, without any fear of facing life as it is. 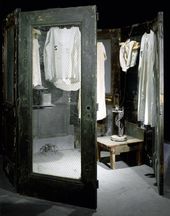 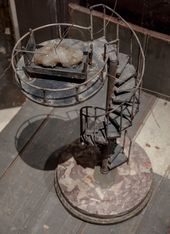 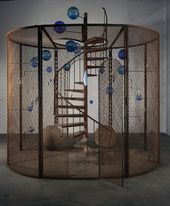 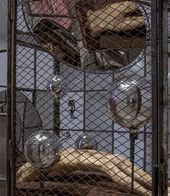 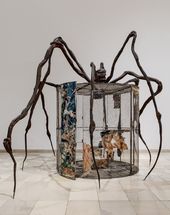 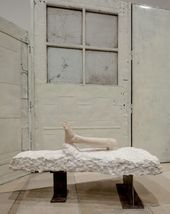 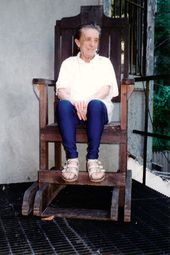 Louise Bourgeois at home in 1995 sitting in the electric chair later used in Passage Dangereux (1997)
Photo: © The Easton Foundation 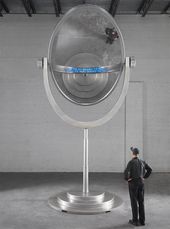 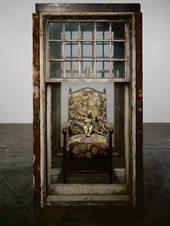 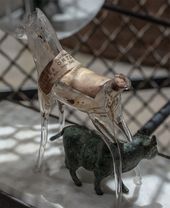