A master of Children’s Portraiture

Artists have always been drawn to the singularity of childhood, that time in an individual’s life when one’s perception of the world is not yet clouded, and when a child looks at everything in it with happiness and trust.

In Western European art, images of the Madonna and child express the inseparability of motherhood and childhood, the connection of both blood and spirit that demands protection, love and empathy.

Russian artists have also sought to grasp the special soulful light that emanates from children. Valentin Serov, a master of the psychological portrait genre, often painted them: it was, in a way, a respite for his soul, an attempt to come closer to the realm of youthfulness and tranquillity.

The artist's spirit always gravitated towards joy, and it was in children that he found the quiet light, the luminous silence that safeguarded the mystery of the divine connection to the true world of beauty.

Even as a very young man, Serov fell under the spell of children's trust in the goodness of the world; he expressed his understanding in the following words: "I will only paint what is joyful!"

This revelation materialized in the image of Vera Mamontova, known as the "Girl with Peaches". For Serov, this now famous portrait of a child was a distinctive reflection of the atmosphere at Abramtsevo, that community of artists where he was truly happy.

Throughout his life Serov kept returning to the world of childhood with almost unmatched tenderness and affection. He often painted touching images of children, both his close acquaintances' and his own, whom he loved most tenderly. Whether he received a commission or just wanted to paint them for himself, all the children in his portraits share the special light that envelopes them like a charm, protecting them from harm.

Whether it is the "rose princess" Olga, the daughter of Alexander III, or the very young Mika Morozov (the future renowned Shakespeare scholar) in a tall chair, or Serov's own son Sasha with a book, at a small table and with a doll in the background - all these works are a testament to the joyful and impenetrable world that belongs only to such children with curious eyes.

The portrait of the artist's wife in a hat is a good example: Olga Serova, nee Trubnikova, is the very image of motherhood. In the background, two children are playing in a sun-drenched meadow: they may have fled her careful watch, but still need her tender devotion.

In another work we see Serov's sons, Yura and Sasha, on what could be a balcony or the deck of a boat; one is looking at the viewer, the other into the distance. Are they not the very symbol of the kind of children's curiosity that occasionally baffles adults? Another canvas, barely touched by the artist's brush, depicts the two Botkin girls, Pavel Tretyakov's nieces, whose images are so clearly and touchingly evocative of little baby birds.

That said, Serov's manner is entirely devoid of any embellishing, his brush precise and selective. One work depicts a shepherd boy in a cap sitting in a meticulously painted harvested field. We cannot see his face, he is looking at something intently, and that concentration makes him especially innocent and engaging.

In the equally effortless and warm double portrait of his older daughter Olga and her brother Anton, Serov uses the palette so characteristic of early autumn or the time directly before the Feast of the Transfiguration.

Serov was a frequent guest at the home of his cousins, the Simonovich sisters; it was there that he met his future wife Olga, who had been adopted as a child by her mother's doctor after her untimely death. One cannot help but admire Olga's rare wholesomeness captured by the artist in his early portraits of her ("At the Window").

For Serov, the world of nature - whether meadows, fields after harvest, a view from a window facing a garden or onto the sea - is almost synonymous with the world of childhood. A good example is his "Bathing a Horse" (1905): his eldest son with the horse is in the foreground, while in the background several other boys are running through the shallow waters of the Baltic Sea. It seems that we can clearly hear their laughter and feel the drops of salty water and the warm, gusty wind.

Serov found many new motifs for his landscapes and portraits while staying at the von Derviz estate in Domotkanovo - Nadya Simonovich, one of Serov's cousins, had married a Derviz. The artist used an iron sheet (it may have been the first thing he could find) to paint Nadya's portrait with her baby in her arms. The sleeping child's head is shown in such a way that the viewer experiences the same sense of safety that the child feels being so close to her young mother, while she appears as the epitome of infinite kindness, love and tenderness.

Youth is equally charming in Serov's work. His painting of the Kasyanov girls, festive bows in their hair, shows them almost as young ladies, although still holding on to one another. Or Adelaida Simonovich, lost in a book: she is sitting in the garden, the book in front of her on the table, her bright red bead necklace instantly drawing the viewer's eye. In another work we see a different girl from the same family: she looks like a mere child, but her inquisitive gaze could be that of an adult.

The beginning of the 20th century gave Russian culture two major portrait artists, Valentin Serov and Anton Chekhov. These two masters of the psychological portrait had many things in common - they literally cut through their time with their conceptual and intimate creative analysis.

It is no wonder then that the master writer Chekhov and master artist Serov both had such a sharp eye - they could glimpse, sometimes even completely reveal the inner core of a human being. As they worked in their respective art forms, they always acknowledged their subjects' social class: remember Serov's Finnish girl milking a cow, or Chekhov's young baby-sitter in his short story "Sleepy".

It would be no stretch to imagine Serov's little shepherd with Chekhov's Van'ka Zhukov, who wrote the infinitely naive letter to his "grandpa at the village" - all these works of art reveal the essence of "childhood", its vulnerability in the adult world and the striving to be included in its mature, conscious pursuits.

Neither Chekhov nor Serov lived to reach the age of 45, but in their short lives each left behind a manifold, deep analysis of their era, its image, its ways and character. At a crucial point in history, severe and volatile though it was, they were able to preserve love, tenderness and hope through their portraits of children. 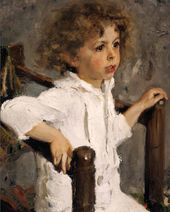 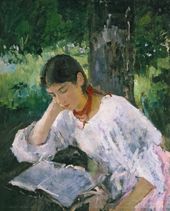 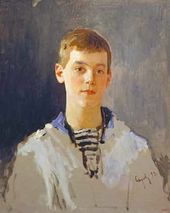 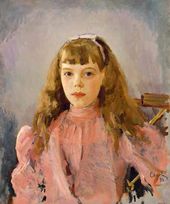 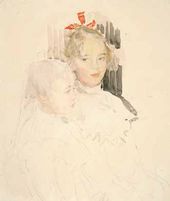 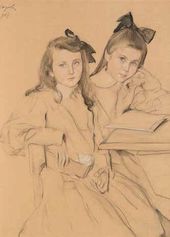 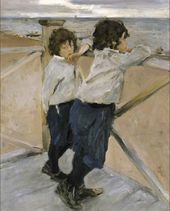 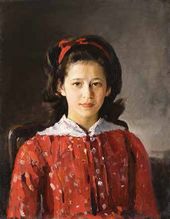 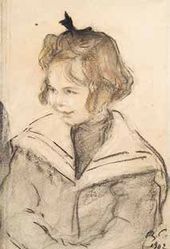 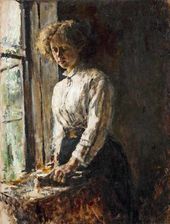