Did Vorticism, that little-known British avant-garde movement that existed so briefly in the second decade of the 20th century, really deserve the major exhibition “The Vorticists: Manifesto for a Modern World” (June 14 to September 4) at London’s Tate Britain? Despite being Britain’s first truly radical artistic movement, it was, after all, held in such little regard after the World War I that it was all but forgotten for decades until the early 1950s. That was when the English art critic Herbert Read published his seminal survey “Contemporary British Art”, a book that championed the radicalism of British art. It was a publication that also gave the impetus for the Tate Gallery’s 1956 exhibition “Wyndham Lewis and Vorticism”, placing the difficult and irascible Lewis at the helm of the movement - as Read had done - and exciting some interest in avant-garde circles.

But even then the movement hardly made much of an impact outside London. And compared to its European counterparts — Cubism, Expressionism, Futurism, “Der Blaue Reiter” — all of which flourished at the same time, it barely registered at all on the international stage.

Why was this? Does it reflect the quality of the work itself? One can, I think justifiably, argue that the neglect had more than a little to do with an entrenched belief in the innate conservatism and parochial nature of British art. This attitude had existed for much of the 20th century, not least among the British themselves — and it certainly infected many of Britain’s intellectual elite who were always the first to look to the continent for forward-looking art and ideas, rather than to home.

In fact, there are several answers to the question. Many of the group’s paintings never survived World War I, which means there are actually very few key works left on which to base a genuine assessment. “Vorticism: Manifesto for a Modern World” acknowledged this, and a considerable part of its display was concerned with ephemera: letters, documents, photographs, and texts. There is simply very little to place on the walls. What does survive comes from the only two exhibitions the movement had during its brief lifetime: one in London’s Dore Gallery in 1915, the other in New York’s Penguin Club in 1917 (the latter was organised by the wealthy and influential American collector John Quinn, a friend of the poet and Vorticist theorist Ezra Pound).

Furthermore, one of its most talented members, the precocious French sculptor Henri Gaudier-Brzeska died in the trenches just a few days before the Dore exhibition opened. Meanwhile, its journal, “BLAST” — which had been influential in avant-garde circles for its experimental typeface and enigmatic pronouncements that read more like concrete poetry — fold ed after just two issues, due to lack of money if not will. Finally, two of its most talented artists who did survive the war, David Bomberg and Jacob Epstein, were never signatories to its manifesto, and Epstein, for one, distanced himself from the movement.

But beyond this, it must also be noted that there is a paradox in calling the movement a wholly British one: Pound, as its chief theorist and publicist, was, of course, American, as was Epstein, while Lewis was born in Canada and spent much of his peripatetic young adulthood in Europe, absorbing modernist art influences. Gaudier-Brzeska, whose burgeoning brilliance provides three of the most striking exhibits on display at Tate Britain was, as mentioned, French.

The group was originally conceived as “The Cubist Art Centre” in 1913 (shortly changing its name to “The Rebel Art Centre”) as a rival to that other London avant-garde set, the Bloomsbury group. Lewis had worked alongside Bloomsbury member and art critic Roger Fry, taking part that year in his Omega Workshop, where artists designed home furnishings for the moneyed classes. But after Fry failed to inform others of a commission for a display at the “Daily Mail” Ideal Home Exhibition, Lewis used this as a ruse to cut ties with a group with which he had little in common. He wrote a round-robin letter denouncing Fry for misappropriation by keeping the commission a secret (the letter, which was on display in the exhibition, blusters with so much self-righteous indignation that that you can’t help but find it funny).

Core members of what was soon to become the “Vorticists”, named by Pound — after the image of a vortex, “that point in the cyclone where energy cuts into space and imparts form to it...” — promptly abandoned Fry and Britain’s most radical art movement was born. (Interestingly, this quotation, in which he defined the essence of the movement, came from Pound’s 1915 interview to the Russian journal “Strelets” (The Archer)).

Having spent some time in avant-garde circles in Europe, Lewis was already acquainted with European Modernism at first hand, with the ideas of Cubism, Futurism and Expressionism. Indeed, he was probably the first artist residing in Britain to encounter Cubism at first hand; thus, his paintings had already appropriated Cubist motifs, marrying its strong structures — soaring planes, jagged angles and interlocking forms — with the fluidity and movement of Italian Futurism and the vitality and boldness of German Expressionism.

But although many of his paintings haven’t survived — among them an elaborate and ambitious nine-foot canvas entitied “Kermess” and his designs for London’s bohemian club-cabaret “The Cave of the Golden Calf” (the place to be seen if you were a radical artist and intellectual) — the exhibition gives a tantalising flavour of that early work through numerous studies and sketches on paper. A series of black and white lithographs from 1913, which illustrate Shakespeare’s “Timon of Athens” shows just how dynamic, radical and forceful Lewis’s work at this stage was — and how different from the rather more genteel lyricism of the paintings and designs, with their bright colours and pastel shades and gentle organic forms, of the Bloomsbury group.

Indeed, the brutal, colliding forms of “The Crowd”, painted a year later, suggests a descent into some kind of mechanistic urban hell: a series of interlocking geometric shapes is painted in a limited palette of browns and dull ochres; within each of the rectangular frames faceless, radically schematized stick figures appear imprisoned. Lewis paints a world which is harsh, brutish, claustrophobic and dehumanised. It is a sour, if not apocalyptic vision of humanity and, in sensibility, is far removed from Futurism’s celebration of the machine.

But since most of these small-scale works on paper simply don’t command the space, the exhibition doesn’t begin with Lewis, but with an extraordinary work by Epstein — one which was, in fact, conceived just before the movement’s inception. But however tenuous its link, in terms of embodying some of its many contradictory ideas — a fear of the machine age as well as an embracing of it — “Rock Drill” from 1913-1915 (although it is, in fact, a reconstruction, since the original doesn’t survive) makes for a startling opener.

Occupying a gallery by itself, it features a robotic android astride a tall tripod quarry drill. With its craning neck, visorlike features and exoskeletal body, it is both a majestic and a frightful vision. Through its open abdominal cavity, we see that this monstrous vision is, in fact, carrying a foetus, which, whilst rendering it oddly vulnerable also engenders Wellsian fears of subhuman or non-human species — fears to do with the catastrophic end of civilisation through the unstoppable power of the machine.

Further on we encounter this same figure as a truncated form, this time cast in bronze. It’s shorn of the lower part of its body and it’s no longer steering a drill — no longer, it appears, master of all it surveys. But along with the subject’s loss of power, there’s a corresponding loss of some of its vitality as an artwork: it doesn’t have quite the ability to shock and arrest. It is no surprise that this reduced version was made once the war had started and the full horrors of the conflict were becoming apparent.

The second room provides a work of equal brutal force, but of a rather different kind. Carved in stone, it’s Gaudier-Brzeska’s magnificent “Hieratic Head of Ezra Pound” from 1914. Pound instructed the young sculptor to make him look “virile”, and Gaudier-Brzeska, who was just 22, interprets this rather literally, by making the head, from the back, deliberately resemble a huge phallus: we clearly make out the carving of buttocks for its base and the glabrous penile head. The sculpture’s brooding, arrogant presence, however, stills any risible associations with schoolboy smut.

The head’s schematized features are, in turn, borrowed from the Easter Island heads that Gaudier-Brzeska had encountered at the British Museum. Yet we see that just a year earlier the artist had carved “Crouching Fawn”, a sweetly charming, wholly naturalistic work that would have delighted even the most conservative critic. This language of avant-garde primitivism was new to this young artist, yet in less than a year his genius is anticipating Brancusi.

In later rooms there are paintings and sketches by the female members of the group: Jessica Dismorr, Helen Saunders and Dorothy Shakespear, Pound’s wife. Given the group’s later reputation for incendiary right-wing (indeed protofascist) politics, it’s interesting and somewhat surprising to note how much the movement promoted its female members. But although Shakespear was a gifted colourist — her “Composition in Blue and Black”, from 1914-15, is a delicate balance of colour and form — these works are not, on the whole, particularly distinguished, and again mostly consist of small works on paper.

Of the larger-scale paintings, of which there are so few, it is David Bomberg’s bold zig-zagging “Mud Bath”, from 1914, that easily dominates. This much underrated working-class artist depicted a scene from his local East End baths in the poor Jewish quarter in which he had grown up. Here the figures have been reduced to stark blue and white geometric forms against a bright red and earthy yellow ground.

We also find a series of Alvin Langdon Coburn’s “Vortographs”, hailed as the first abstract photographs ever produced (executed in 1917 and shown at the Penguin Club, when the movement was, in fact, already breathing its last — it would not survive the war). Edward Wadsworth, meanwhile, shows himself to have been the most elegant printmaker of them all. “Rotterdam, 1914”, is a dizzying, seductive vision of tumbling geometric forms — depicting a schematised and crowded aerial view of the city — in bold black and white woodcut.

Despite expectations to the contrary — with such a paucity of surviving works, what could we hope to find? — this exhibition provided an insight into Britain’s first major 20th-century avant-garde movement. Moreover, a clever and judicious use of space — placing key sculptures as single showpieces — ensured that it also offered a rich and varied visual experience. 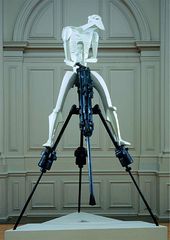 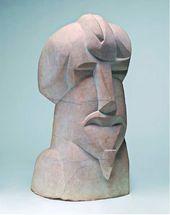 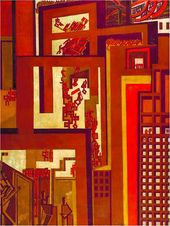 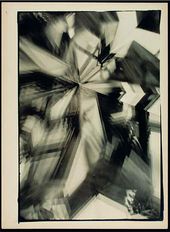 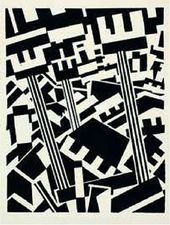 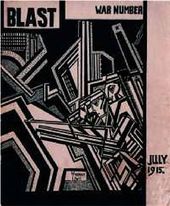