A solo exhibition of the Moscow-based sculptor Viktor Korneev, an art project distinguished by its elaborate conceptual framework and original execution, runs at the Tretyakov Gallery’s Engineering wing from September 1 to October 30 2011.

The artist began to prepare for the show long in advance, spending much time looking for suitable music to accompany it; he ultimately selected music by Alfred Schnittke, which, Korneev believes, resonates with his own sense of space and time through its polyphony of associations of freedom of self-expression.

Korneev’s sculptures represent an original fusion of the figurative and the metaphysical, of exterior authenticity and visual paradoxes, austere constructiveness and expressiveness, hyperbolic shapes and see-through counter-forms.

The artist has always worked from nature, and a deep knowledge of the architecture of the body is at the core of all his work, which continues the vein of the neo-classicist traditions of European sculpture of the 20th century, and artists like Giacomo Manzh, Marino Marini, Francesco Messina, and Venanzo Crocetti. Korneev discovers countless emotional nuances in the traditional themes of standing, sitting, and moving figures, while his nude images are exquisitely wrought studies. The result is a triumph of spontaneity stamped on the energetic contours of the figures. One of the key works featured at the show is the two- meter-long statue “Flora” (wood, 2011).

Like tectonic plates, neo-classicism converges with metaphysics; Rene Magritte and Alberto Giacometti are among the great masters whom Korneev highly respects. The exhibition at the Tretyakov Gallery is an example of creative development of the artistic concepts of neo-classicism and metaphysics. The seminal vectors of Korneev’s art are balance and equipoise, journey and return, memory and recollections, a touch and the mirror image (reflection).

He spends several months every year in Sweden, working outdoors, making large granite statues (the show features photographs of these works). His “Swedish Madonna” (1997) looks very much like a portrait of a real person, while at the same time being a Neolithic statue that absorbs the powers of the earth, water and heaven.

The sculpture in light-hued granite “A Touch” (2008) is conceptualized as a monumental fragment: the sole of the goddess’s foot touches the water without disturbing its mirror-like surface, and thus a form merges with its reflection at some magic point.

Korneev chooses a fragment as a specially-potent element of expressiveness, which when made in stone is always significant and monumental. In this “kingdom of fragments” motion unconditionally prevails, as seen in the marble composition “Grapes”: Bacchus, feast, autumn, harvesting, the invisible hero who has reached the land of promise.

Korneev steadily employs the figurative motif of “a touch”. Using minimalist techniques, he expands the emotional reach of sculpture to create a polysemic environment of mental associations.

The substances which the deified marble and bronze characters enter are varied: water; light and shadow; the gold of the Sun and the silver of the Moon; the river of time, memory and recollections; sound and silence.

Korneev creates unusual variations on mythological themes. One example is Goliath, traditionally seen as a Philistine warrior, invincible destroyer, and ferocious giant, victory over whom became a moment of triumph and badge of honour for the young David.

In all classic paintings and sculptures David was depicted either fearlessly approaching the giant, or resting his foot on the head of the prostrate Goliath. But Korneev’s Goliath is special, unlike such textbook images: David is represented only through a fragment, the sole of his foot elegantly placed on the Titan’s head. This is the only detail corresponding with the biblical story — in Korneev’s mind Goliath is a symbol of the fall of empire.

The artist is intrigued by situations involving balancing on a thin line between the possible and the impossible, between an action, piece of reality, event, or fact in the moment of enactment, and the moment when such elements cease. “Still-life with a Chalice” (wood, 2011) evokes the biblical story of Isaac’s sacrifice. The sculptor introduces his own theatrical flourishes, like the head of the golden ram, and the hand holding a wooden chalice filled to the brim with melted gold. Any slight wavering of the hand or tipping of the balance is certain to spill the golden substance. This is a still-life “on the edge of the possible”.

Korneev is a superb portraitist. In November and December 2010 the Moscow Museum of Modern Art held his solo show, “Three Rooms”. The artist mounted three installations in three halls. One, titled “Among the Dignitaries”, was a group portrait of the “dignitaries” of Russian culture of the early 20th century: Kazimir Malevich, Wassily Kandinsky, Kuzma Petrov-Vodkin, Vladimir Tatlin, David Shterenberg, Marc Chagall, Ossip Zadkine... Each image is pithy and accurate, and the portraits were made using photographs, the artists’ self-portraits as well as their artwork.

The “Group Portrait” of such masters of the Russian avant-garde is the portrait of a certain era — one which nevertheless reaches beyond its particular time. The momentous artistic discoveries made in the 1900s-1920s remain relevant to this day. At the Tretyakov Gallery the artist shows five of the seven figures from this series.

The still-life has also been an inspiration for the sculptor, and in this genre he pays tribute to Rene Magritte. Heeding his personal response to individual motifs in Magritte’s art, Korneev created a whole suite of still-lifes in stone.

Korneev elaborates in his own fashion the symbolism of stone and water, envisioning the struggle between the two elements, and their mutual resistance, as a form of unity. An example of this is the composition “Imagination” (2008), a new, modern version of the proverbial bath of Archimedes.

“Childhood-time-dream” represents yet another narrative chain, evident in “Black and White” (“A Baby”, wood, 2006): the boy, his eyes closed, balances himself with his arms as he would with wings, as if soaring in the space of dreams.

Childhood-time-dream are three demiurgic substances, which when combined become many times more powerful. Korneev created his self-portrait — the self-portrait as a child in a wide-brimmed summer hat, whose hands are already making something, studying objects and textures.

The artist often contrasts a robust athletic torso and a child’s little arm which, through its touch of the torso, reaches into the magic depths of the body, as the child’s arm transfers unbelievable strength to the athlete.

Korneev’s quest in the realm of “concepts” and “substances” yielded two series of sculptures (mural high reliefs). One of them, “Trying to Recall”, was shown in 2010 at an exhibition at the Museum of Modern Art in Moscow. The categories under scrutiny were memory, recollections, dream, and the awakening of the energy of reason. The Tretyakov Gallery features a twin series — “Pressure”, a metaphor of confrontation between the unconscious domain and external circumstances.

Its archaic, grotesque little figures with short little arms and legs are situated in a metaphysical environment and sunken into objects imitating the seats of soft office armchairs and sofas. The direct opposite of the magic water mirror, this environment has no reflections, imagined perspectives or breakthroughs into an alternative reality. The touch transforms into pressure, but nevertheless the little figures forming the “alphabet of states” calmly accept external circumstances and are sleeping peacefully, albeit restlessly.

The series “Pressure” does not have a narrative or an explanatory text — instead the text is the “alphabet of states” itself, the attempt to capture elusive phantoms of the unconscious.

Purism, minimalism of techniques, and pause are important categories in Korneev’s work. The sculpture “Full Moon” (wood, 1997) depicts the mystery of the birth of moonlight, the pause between the rising and the setting of the sun, the touching of memory, and the entrance into silence.

Rene Magritte created two pictures, in 1945 and 1948, with the same title — “Memory”. The gypsum head of a lovely ancient goddess has a red stain on her right temple, the stain both a wound and the scarlet flower of surrealism. There is a boundless blue sea of meditation behind the ancient bust.

Korneev introduces his sculptural version of Magritte’s painting, featuring, instead of the goddess’s head, a man’s head with a similar red stain on the red temple. There is a strange image evoked: a person — an object, a Buddhist saint — a pilgrim, creatures from memory...

Any departure from rules is a cause for reflection both for the artist and the viewer, Korneev argues. Real space and metaphorical space truly become “actors” in his sculptures, and departure from plot and any detailed narrative releases the powers of the imagination. The artist is certain that the space of meanings has many pathways, and each is justified. 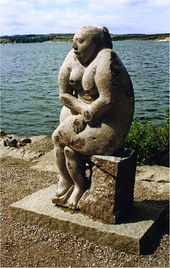 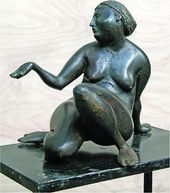