Dedication to a Genius

Many a creative genius of 20th-century art was overshadowed by the two great Spaniards - Salvador Dali and Pablo Picasso. Nobody was discussed, disputed or written about as much as they were; no other artist’s work was covered as extensively as that of these two titans in books, albums, brochures and articles.

The early efforts of the young Salvador did not seem to foretell the enormous talent which would produce his shocking, explosive and miraculous art — an art that was to eclipse everything imaginable. To this day, there is no force that can match his phantasmagorias.

The current retrospective from the Fundacio “Gala — Salvador Dali Figueres” collection at the Pushkin Museum of Fine Arts in Moscow is the most complete exhibition that Russian viewers have seen of the artist’s work. It proves a chance to discover the work of the phenomenal, extraordinary artist, for his admirers, devotees and even former detractors of Surrealism.

So much has been written about Dah that it seems over-ambitious to think that one can add anything new to the tens of thousands of published pages; however, Dali’s art remains inexhaustible and mysterious, a secret rite of the “one” genius. For the keen heart and sharp mind, it becomes a source of creativity and inspiration. We will continue asking ourselves questions about the phenomenon of his art, his destiny, and his character — and each of us will seek his or her own answer.

Dali’s versatile gift, his talent’s mission and the perfect craftsmanship of a demiurge (creator) and an oracle (visionary) — all these dismayed, delighted and angered the public, bringing simultaneously hope and disillusionment.

Let us allow ourselves a degree of liberty when answering the innumerable questions about this Don Quixote of the 20th century — questions about the phenomenon of Dah, his mystery, and the secrets of his genius. I believe that it was the great Catalan’s muse, Gala, nee Elena Diakonova, who played the most vital part in his life. According to the artist’s own admission, this extraordinary Russian woman was responsible for making him the only genius among his contemporaries. It was Gala’s presence in Dali’s life (her first husband, the French poet Paul Eluard, gave her the nickname Gala, literally “celebration” in French) that awakened his astonishingly sensuous intuition (multiplied by his complexes), and instilled in him faith in his unique excellence and messianic calling. It is more than likely that she introduced him to the literature of Nikolai Gogol and Fyodor Dostoevsky — we can only guess about those influences on the artist. Gala was destined to become his model, his mother, wife and lover, and alter ego, the co-author of the genius — the appearance of the double signature “Gala-Dali" in his paintings testifies to that. Diakonova stimulated his miraculous, virtuoso gift for drawing, his mastery of composition and light; it is possible that many motifs, themes and settings for his paintings were suggested by her. But these are all only assumptions...

In Dali’s personality, religious feeling and rational, materialistic thinking were naturally combined; he was a master of improvisation — and a shrewd pragmatist. Dali’s installations, his art objects and work for the stage, the images in his paintings and drawings did not entertain the public but rather hypnotised it. In his art, the ironic fable morphed into something grotesque. The unrivalled master of colour and drawing, Dah never failed to amaze the viewer with his inexhaustible creativity and the expert implementation of his constantly mystifying vision. He never flattered anyone except his muse, his Madonna, the one he worshipped all his life, even though he was surrounded by some of the most talented individuals of his time — Pablo Picasso, Luis Bunuel, Man Ray, Marcel Duchamp, Guillaume Apollinaire, Rene Magritte, Federico Garcia Lorca, Carlo Carra and Andre Breton, to name only a few.

There is a vast, cosmic depth of feeling and a multitude of thoughts in the microcosm of Dalfs early small, sometimes miniature paintings; they stimulate the viewer’s imagination with innumerable allusions. His creations are a brilliant example of reckless intellectual mind games — but also deeply thought-through variants and formulas of unique philosophical meaning and monumental significance.

I believe that one of the more vivid, characteristic attributes of the artist’s consummate, intricate professional expertise is the possibility to enlarge — both mentally and physically — almost to an impossible extent the miniature images in his art, as well as the smallest details of his bizarre compositions.

Brutal and fragile, shocking and humble — he was a vulnerable and gentle soul; for him, art was not just a form of self-expression, but a shield from obscurantism and bigotry, the know-it-all slavery of corrupt moralizers and virtuous sinners. His in-the-face insolence knew no boundaries; Dali challenged anything he rejected, and yet remained vulnerable himself. His Spanish temperament helped him confront the world as well as his own internal complexes.

I was lucky to be the first Russian art critic to write two modest studies on Dah, the first in 1989, the second in 1992. Exclusively thanks to the courage of the publishers of “Znanie” (Knowledge) and “Respublica” (Republic) and due to the huge circulation of these popular publications, my work received reasonably wide publicity. One of the happy consequences of that publicity was my ensuing correspondence with Gala’s sister, Lidia Diakonova (by marriage, Jaroljmek). I mention this here to express my gratitude and honour her memory, and also because she shared with me her recollections of meeting Dali, as well as her impressions of him.

I quote from one of the short letters she sent to me from Vienna, where she was living at the time: “Quite a few articles and brochures have recently been published, and they are full of the most improbable stories that make use of the fact that he [Dah] was an extraordinarily odd person, and people reacted to him in all sorts of ways.” Remembering Dah, Gala’s sister stressed his modesty, shyness and surprising tenderness — all qualities that became obvious within his family circle, among the select few who were close to him. “When we met in Paris or Italy, he could be the sweetest and the most down-to-earth of people,” she wrote. As someone who was not at all a stranger to Dah, she shared with me these and other frank accounts of the artist’s inner world, one that was hidden from the curious public, and her recollections fell in line with my own ideas about Dali and his art.

This modest dedication does not aim to describe the paintings and drawings that are part of the Moscow exhibition (Boris Messerer’s brilliantly-designed artistic presentation also deserves mention). Quite a few translations of materials on Dalfs art and heritage have recently become available to the public, including books by Dalfs closest aide who worked with him for many years and was his main biographer, Robert Descharnes. It is also worth mentioning the brilliant translations of the artist’s literary work by Natalya Malinovskaya, which excellently introduce it to Russian connoisseurs.

The spiritual, philosophical and symbolic meaning of Salvador Dalfs art possesses a magical appeal; it transcends time, not just because the world of his images is governed by the historical scale of his artistic thought, where humanity’s vices and virtues, good and evil, beauty and ugliness are inter-twined to give rise to an incredible, all-consuming divine energy. As a true creative genius, DaH had the ability to foresee, to anticipate; he created his own aesthetic values and meanings; he revived the art of the past and heralded the art of the future.

Dali's heritage is enormous. He expressed himself in various forms of holiness and sin, in painting, drawing, sculpture, cinema and literature, decorative art and design; he became a universal dramatic figure of 20th-century culture. His art has always been and will always remain unpredictable, impossible to label formally or dispassionately. Surrealist manifestos aside, the mystery of the phenomenon of Dalfs art doctrine will only be revealed by time. 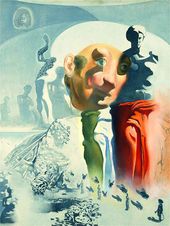 Napoleon's Nose, Transformed into a Pregnant Woman, Strolling His Shadow with Melancholia amongst Original Ruins. 1945
Oil on canvas. 51 × 65.5 cm 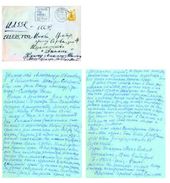 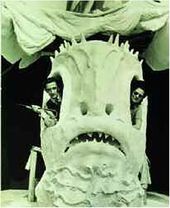