I am greatly pleased to pioneer in The Tretyakov Gallery magazine the section “Pierre Cardin Presents”, introducing my projects in which theatre, ballet, opera, dance, visual and applied arts, and fashion performed spotlessly and solo are combined to achieve a synthesis that is the thing of the future.

A synthesis of different arts is at the core of the dynamic, breathtaking opera ballet show “Marco Polo” directed by the French ballet dancer and choreographer Marie-Claude Pietragalla, with the futuristic costumes designed by the legendary couturier Pierre Cardin. The storyline based on historical events, materialized through the vocabulary of modern dance, is accompanied with alternative music, and the technical side and the design fit together so seamlessly and beautifully that the production very quickly earned accolades around the world.

Cardin’s experience in theatre, opera and ballet is very rich. The inventive and imaginative couturier designed dresses for Maya Plisetskaya (ballets to Rodion Shchedrin’s music “Anna Karenina”, “The Lady with a Lapdog”, “The Seagull”), and Anatoly Efros’ film “Fantasia” (Fantasy) loosely based on Ivan Turgenev’s novel “The Torrents of Spring”.

In 2001 the fashion designer undertook the production of a musical based on an old legend “Tristan and Isolde”: he not only designed the costumes for the performance, but also produced and directed it, and invited a group of Chechen teenage dancers called “Lovzar” to dance in the show. The maestro is the owner and director of the theatre venue Espace Pierre Cardin, and the founder of the annual festival of arts Festival Cardin in Lacoste, France, which is marking its tenth anniversary in 2010.

In 2009 Cardin created costumes, sets and furniture for the musical “Casanova”, the very title of which evokes music, poetry, intrigue and... passion. Dressed in haute couture clothes, the collaboration between the talented pianist and designer, and Pierre Cardin’s nephew, Rodrigo Basilicati, the young Italian composer Daniele Martini and the celebrated choreographer and soloist of the Ballet National de Marseille Julien Lestel premiered at the Festival Cardin on Piazza San Marco — the centre of Giacomo Casanova’s home town, not far from which Pierre Cardin was born, two centuries later. “This is a modernist, innovative production,” said Galina de Bouard, the official representative of Mr. Cardin in Russia. “It introduces Casanova as a young man who, at a fancy-dress ball, falls in love at first sight with the charming daughter of a Doge of Venice. The costumes are made of modern fabrics in a modernist style, and only slits on trouser legs or the cut of the shoulder part of a dress, as well as the views of old Venice and the interiors of Casanova’s castle on a big screen, recall those times.” The production has been conceived as a “bipolar” enterprise, with the Italian composer and performers responsible for the opera side, and the French participants, for dance.

The show is to tour in Moscow soon, but before that, on 30-31 October 2010, Muscovites will have a chance to appreciate the choreographer Julien Lestel’s craft in the production of “Constance”, a ballet based on D.H. Lawrence’s novel “Lady Chatterley’s Lover” (1928) at the Galina Vishnevskaya Opera Centre. Weaving together covert references to the styles and techniques of Vaclav Nijinsky, George Balanchin, Serge Lifar, Leonide Massine, Jin Kylian with the emotional music of Philip Glass and the sensitive lighting by Max Haas, Lestel persuasively conveys the unchecked magnetism and graceful sexuality in this modestly staged ballet, where the sets in some episodes are created using the interplay of light and dark.

The Editorial Board of “The Tretyakov Gallery” magazine express their gratitude to Galina de Bouard for thematerials provided. 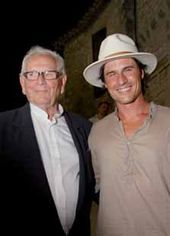