"The Levitan House of Landscape". Near Vladimir

A landmark event happened on August 23 2008 in the village of Eliseikovo, in the Petushinsky District near Vladimir - the Levitan House of Landscape opened.

The artist first visited this area in May 1891, on the invitation of the historian Vasily Kluchevsky, who had a summer home by the Peksha River. Next year Levitan painted his famous "Vladimirka Road" in the neigbourhood of the village Gorodok. Levitan would come back to that place again, although now not of his own free will: the authorities had banished Jews from Moscow, and he had the chance to return only in December. Over the several months he spent in the region the artist created 17 paintings, sketches and drafts featuring the environs of Eliseikovo, Peksha and Kosteryovo.

The idea to open a local museum dedicated to the prominent Russian landscapist dates back to the 1980s, among Levitan enthusiasts who wanted to immortalize the great painter's art. It was after World War II that devotees of the artist formed a union of sorts, whose founder was Yevgeny Soloviev, a keen admirer of Levitan's talent. Thanks to Soloviev's solicitation, the rural home where Levitan lived and worked in 1892 was granted protection by the state in 1977, and the house owner, a certain Mr. Popkov, sold the frame of the house to Kosteryovo village. In 1989 the house was returned to Gorodok village (in Soviet times Gorodok was incorporated into Peksha village; a street named Gorodok-Levitanovskaya recalls the artist's sojourn in the area).

In 1987 a group of historians of the region and artists headed by Vladimir Yastrebov and Anatoly Bartenev organized a citizens' committee, which for many years popularized Levitan's art. Such local residents as V.N. Malinovsky, V.N. Mashtafarov and Maria Kochueva put much work into studying and popularizing Levitan's legacy throughout the region. Finally, in the 1980s-1990s, when the Levitan committee, now in possession of a considerable creative "capital" that it had accumulated, started to study the artist's life and work in the area, the idea to create a Levitan museum in Gorodok village was put forward. In 1990 the construction of the museum began, on a design created in the previous year by L.V. Anisimova, an employee of an arts and crafts workshop in Vladimir.

1992 saw the first Levitan Festival, dedicated to the 100th anniversary of the artist's stay in the region, and it subsequently became a regular event. Artists displayed their works at the shows. Guests included visitors from Moscow (including researchers from the Tretyakov Gallery and representatives of the Stroganov University and Moscow Academy of Painting, Sculpture and Architecutre), Vladimir, Elektrougli, Kosteryov, Petushki, Karavaev. Unfortunately, on July 16 1999, the Levitan Memorial Museum in Peksha village, whose creation had required so much time and labour, burned down in unclear circumstances. It felt as it the dreams of the many art aficionados and regional historians had been consumed by the fire as well. But the "Levitanians" did not give up and continued their efforts to immortalize the artist's sojourn near Vladimir, and their work bore fruit.

A decade ago the Levitan committee proposed to open the museum in Eliseikovo, which for several years had been hosting events dedicated to Levitan's life and art. Once, sketching with his students near Moscow, Levitan said: "I'll save money.. and buy out my studio, and when I become an old wreck or die, you'll set up in it a House of Landscape". The members of the Levitan movement became enthusiastic about the idea of opening the House of Landscape in the Vladimir region. The plan was to create a cultural "hub" where artists would come and stay for a while, making sketches in the open air and creating works of art which later would be showcased in a permanent exhibition or at temporary shows, and become a part of the museum's collection. Cultural figures and regional historians endorsed the idea. The art patron Vladimir Kosya-rumov shouldered the full burden of construction. Over many years he had assisted in organizing the festivals dedicated to Levitan. Since 1995 Kosyarumov had been hosting artists in his retreat in Eliseikovo, offering them for free an opportunity to stay in a solid house built in the early 20th century for a local school. But in the course of time the old house became crowded. Aware that the House of Landscape needed a new home with an exhibition space, a studio, a depositary for artwork, a library, a Levitan Room with an exhibition dedicated to the artist's stay in Vladimir region, Kosyaru-mov at his own expense built a spacious house in the Russian style. The building hosts a collection of local artists' landscapes and artwork collected over the recent years by the " Levitanians". The gala opening of the Levitan House of Landscape took place in Eliseikovo village.

Ms. A.Dupina, the head of the administration of Peksha village and an eager champion of immortalizing the memory of the great painter, came up with a proposal to restore historical justice and to mount an Old Believer tombstone cross (known as a "Golubets Cross") on the preserved stretch of the erstwhile Vla-dimirka Road, the way it is featured on Levitan's picture "Vladimirka Road". On Holy Transfiguration Day on August 19 2007, a Golubets Cross was mounted and blessed in Peksha.

For almost 20 years now, the art centre in Eliseikovo has been hosting Levitan festivals, poetry festivals, and shows of artists who have worked in the open air. During the last decade the activities of the private museum has gained greater momentum. Levitan's name is the magnet attracting to Peksha tourists, Levitan scholars, and lovers of Russian landscape painting. The members of the Levitan movement have plans to rebuild Popkov's house and relocate it to the museum zone, where it would become the centerpiece of the memorial display. Currently, a group of enthusiasts are painstakingly collecting relevant artefacts. Bringing back to life the interior of the house where Levitan lived requires both scholarly research and the active involvement of regional historians. The creation of the memorial museum of the artist is a matter of the future, and its opening is bound to become an important cultural event not only for the region, but for Russia as well.

The Editorial Board of the Tretyakov Gallery magazine express their gratitude to Vladimir Kosyarumov for the material provided.

Exhibition in House of Landscape.
Photo. 2010 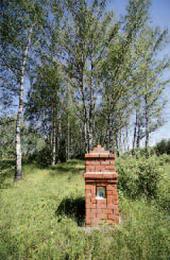