The Colours of Poetry. Joan Miro at the Museum Frieder Burda, Baden-Baden

THE SUMMER EXHIBITION "MIRO. THE COLOURS OF POETRY" AT THE MUSEUM FRIEDER BURDA (2 JULY TO 14 NOVEMBER 2010) IS DEDICATED TO THE ARTIST JOAN MIRO, AND SHOWS AROUND 100 WORKS BY THE CATALAN ARTIST WHO SO STRONGLY INFLUENCED 20TH - CENTURY ART. THE PICTURES COVER SIX DECADES OF MIRO'S WORK, AND ARE DRAWN FROM VARIOUS PRIVATE COLLECTIONS AND MUSEUMS FROM ALL OVER THE WORLD. A LARGE NUMBER OF WORKS OWNED BY THE MIRO FAMILY ITSELF ARE SHOWN AS WELL, A RARITY IN ITSELF, WHILE OTHERS COME FROM THE FUNDACIO JOAN MIRO IN BARCELONA AND PALMA DE MALLORCA. THE EXHIBITION WAS CURATED BY THE WORLDWIDE EXPERT ON SCULPTURE JEAN-LOUIS PRAT, A CLOSE FRIEND OF MIRO WHO ORGANIZED EXHIBITIONS FOR HIM DURING HIS LIFETIME, WHILE THE ARTIST'S GRANDCHILD JOAN PUNYET MIRO ATTENDED ITS OPENING.

"When I start painting, I feel some kind of shock that makes me forget about reality... I need a starting point, be it a speck of dust or a ray of the sun," explained the great artist Joan Miro, who created during his lifetime "only" about 1000 pictures - a small number when compared to Picasso or other great artists. Miro worked slowly and took his time for each small line. Born in Barcelona in 1893, he loved the sea, the colours of the South and the landscape of his native country, although he titled all his work in French, a language of poetry.

"Miro's style was not abstract or figurative, he used a very poetic language in his paintings," explained curator Jean-Louis Prat. Some of Miro's contemporaries, he said, banned colour from their paintings, but for Miro colour always retained great importance. Thus red, green, yellow and blue are dominant in his paintings to be seen at the exhibition, illuminated by natural light in the Richard Meier building. Miro admired nature, and he was fascinated and inspired by everyday objects and their beauty. Freedom, a sense of humour, ease, but also violations of aesthetic rules are typical of his works. He always avoided reaching a standstill or living in the past.

Mysterious symbols are typical of Miro's paintings. The exhibition includes rare smaller works from Miro's early creative years that help to understand his development as an artist, evolving from figured presentation to symbolic picture subjects and ever recurring symbols. These mysterious symbols and colour stains on canvas, which resemble a musical score but seem to emerge from a kind of a dream world, are typical of Miro's paintings. They reappear in his ceramic works and sculptures, contrasting with his pictures. The brainchild of New York architect Richard Meier, the Museum Frieder Burda is a contemporary building particularly well-suited to displaying painting and sculpture.

The exhibition highlights certain specially important periods in the artistic creation by this 20th-century virtuoso artist, underpinning Miro's own assertion that, "People will understand better and better that I was opening the doors to another future, countering all the false ideas, all the fanatic viewpoints." (Or, as Pablo Picasso said about Joan Miro: "... after myself, it is you that open new doors").

The exhibition opened on the upper floor, where several pieces dating from Miro's "detailist" period are followed by works from his Surrealist period — a period characterized by his invention of a world heretofore unexplored in 20th-century painting. The fruitfulness of those years underscores Miro's mastery at conflating a wide range of colours with novel shapes, imbuing his language with a signature resonance. The result is neither abstract nor figurative, but instead the poetic concretization of a multiplicity of artistic inventions.

Miro derived inspiration from the vitality of the quotidian, which he made blossom into a heretofore little known world that gives pride of place to dreams and poetry. "I need a point of departure, be it a mere grain of dust or a flash of light. That form begets a series of things, one thing giving birth to another. Thus a piece of string can trigger a world." It is with an apparent simplicity of means that Miro transforms such a world: be it through some sign, some trace left by a finger or by water on the paper, a seemingly fragile line on the canvas, a spot on the ground that he marries with fire, or else some trifling object that he links to another weird object; Miro succeeds in creating a world of metamorphoses born of his surprising combinations of elements.

Bathed in light, the ground floor of the main gallery presented the larger scale paintings that Miro began producing in his sixties, and into which he poured new energy: their signs and forms attest to his ever-keen spirit of creativity. On display here too are the artist's bronze sculptures, which he at times painted in bright colours.

Miro introduced a spirit of whimsy into his amazingly imaginative artistic universe.

Mr. Prat, the Miro family is a principal lender to the recent exhibition "Miro. The Colours of poetry". Rarely exhibited works will also come to Baden-Baden. Which borrowing commitments are you particularly proud of?

The Miro family is a principal lender, but it is not the main lender of this exhibition. The artworks come from world-famous museums, from the Joan Miro Foundation and also from private collectors from all over the world. In fact, I am proud of all borrowing commitments. In my opinion, among them the painting "L'Espoir du condamne a mort" is outstanding. It is particularly important, because it stands up for the artist's conception of freedom and hope.

There is probably not so much of Miro's early work at this exhibition. However, there are some artworks from the Surrealist period, but most of them belong to Miro's most fruitful period and refer to an illusory world, to the poetics of painting and to the creation of a new artistic world. These artworks of Miro entail a message of hope which is unique in the 20th century. Miro put it like that: "Pour moi, un tableau doit etre comme des etincelles, il faut qu'il eblouisse comme la beaute d'une femme ou celle d'un poeme." (For me, a picture should be like sparks. It must dazzle like the beauty of a woman or a poem).

You got to know Joan Miro when you were director of the Maeght Foundation. What was your experience of him? Was he an open and friendly person?

Yes, he was. Miro and his family were great friends of mine. Miro was just like his works: very committed, free and brave - one can feel it in his works. Miro was a generous person, and he cared much for his fellow men. He was vigorous, active, a man of principles, strongly committed against fascism. His art was anything but frivolous (in the sense of lightness).

Is there any sentence or idea from conversations with Miro in this period which you particularly remember?

Miro was not a person who liked to express himself with sayings and maxims. His statement "Je travaille comme un jardinier" ("I work as a gardener") seems appealing to me in this sense, because it was obvious for him: it is all about his respect for nature.

What did the atmosphere of Saint-Paul-de-Vence mean to Joan Miro, where he spent many summers at Aime Maeght's castle in the proximity of Picasso, Chagall and Calder?

Approximately 100 artworks of Miro from six decades will be exhibited at the Museum Frieder Burda focusing on the colourful paintings. What would you like to emphasize?

What we want to emphasize through the exhibition "Miro. The Colours of Poetry" is all in its title: it is not a classical retrospective but a demonstration of the close interwoven relationship between poetry, painting and colour.

One of the highlights of the exhibition will be the painting "L'Or de l'azur" (1967). Is there any story from Miro about the origin of the picture?

"L'Or de l'azur" (1967) is a brilliant example of Miro's late work in which his play with signs and colours seems to be renewed. Generally, his artworks summarize his very dynamic late works, his commitment and his very strong sense of freedom.

Miro's artistic findings have been reproduced by posterity to a great extent, and the artist himself repeated his topics enthusiastically more and more often. Therefore, for you as a curator it is not easy to provide a clear and new overview on Miro?

Miro always asked questions, and tried to find answers to them. However, these could develop, and they came up in other forms at another time again. However, his reproducing, his turning to them was anything but plain. His polyvalence itself testifies to that; he was not only a painter but also a sculptor, an engraver, a lithographer and a ceramicist. This fact speaks against a mere possibility of producing replicas which would be really impoverishing. My intention with this exhibition was to emphasize Miro's generosity, openness and his being always ready to communicate with people. His soul was open to life and he felt deep respect and inexhaustible love for life as it is. His world is the world of poetry. Miro had a promising conversation for the upcoming century. 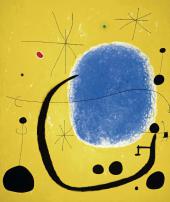 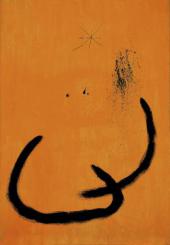 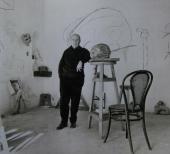 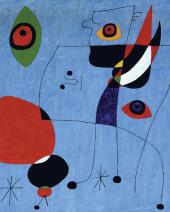 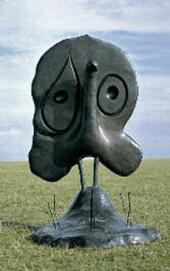