The title said it all: “The Philippe de Montebello Years”. The display ranged across centuries and continents, from Duccio to Jasper Johns, from ancient Egypt to 19th century Congo, by way of guitars, Buddhas, playing cards and illuminated manuscripts. The 300 exhibits were a snapshot of the 84,000 acquisitions made by the Met under the aegis of its outgoing director. By any standards, it is a gigantic footprint.

“It’s a little intimidating,” concedes his successor, Thomas P Campbell, “It’s like one of our acquisition meetings on steroids — an amazing smorgasbord of masterpieces.” Despite that slightly preppy middle initial, Tom Campbell is not American — he is actually British. Outside the museum world and — given the nature of his academic specialism — perhaps even inside it, Campbell ’s name is not well known.

Running the Metropolitan Museum is unarguably the most prestigious museum job in the world. New York’s most visited attraction has a vast endowment and an unparalleled capacity to acquire new works and attract inter-museum loans. With its encyclopaedic collections spanning centuries, cultures and art forms, the Met has no equivalent. If you can imagine such a thing, it is tantamount to running the Hermitage, the Pushkin Museum and the Tretyakov Gallery all at the same time.

“There are lots of wonderful museum jobs,” Campbell said. “But this is a pretty fantastic one. This museum has perhaps the most complete encyclopaedic collection. It’s not as strong here or there as certain other institutions, but in a global sense it’s got the greatest depth and breadth.

We’ve got this fantastic location where we have a large international visitorship. We are the largest tourist attraction in New York. But we also have this very strong more local audience who really care about what’s going on and want a challenging programme. We have the space for both the display of our permanent collections but also our ambitious exhibitions. Also because of the funding here there is a gung-ho can-do mentality. And then finally and most importantly perhaps, under the direction of Philippe de Montebello the museum has been able to attract many of the leading curators in the field. So we have a really strong, very committed creative staff. So all of these things come together and make it really extraordinary and unique.”

Campbell’s decisive and measured delivery hint at the gift for diplomacy which will be a prerequisite for handling the egos of both world-class curators and billionaire donors. “When I first started coming to New York in the early 90s and seeing the vitality of the programme compared to what was going on back in London or Paris, it was just in a different league. It’s like a 16th-century court.”

The comparison is apposite: no one knows 16th-century courts better. For the past 25 years, since discovering the few available tomes on the subject in a boiler room at the bottom of the Courtauld Institute in London, Campbell has made himself a world authority on tapestries. He bumped into the subject almost by accident when looking for a subject in which to specialise.

“I studied patronage in northern Europe and Britain in the 16th and 17th centuries,” he explains, “a period when there is obviously a great building boom and an equally sophisticated literature. But what I didn’t understand was why the painting and sculpture of that time didn’t seem to be as dynamic and engaging as what was being produced [elsewhere] on the continent. And the light bulb went on, that it was these woven paintings that were the prestigious figurative medium of the day.”

The French Revolution more or less killed off the art form, and few collectors had houses big enough to display such vast works, so both the market in and study of tapestry fell into abeyance. For seven years in London Campbell worked on a photographic database of every important tapestry in the world, then landed a job at the Met in 1994. His reputation was established with two remarkably successful shows which hauled tapestry as an art form before a startled public: the 2002 show covered the Renaissance, then in 2007 moved onto to the Baroque. Discreetly alluding to the succession, two beautiful examples hung at the entrance to the Montebello exhibition. So how on earth did one job lead to the other?

“I would probably have been very content as a scholar to have carried on organising exhibitions and writing books and teaching,” he says. “But I have also always enjoyed the managerial side of being here.” He was initially sounded out by the search committee about his views on the sort of person they should be looking for. Then they asked him to apply himself.

“My initial thought was I would very much be an outside candidate. In late spring I rented a car and drove all over England visiting country houses to research a book. It gave me a month of reflection, of thinking, ‘What would I actually bring to this process? Would it be for me?’ The more I thought about it the more excited I felt, the more I thought I could bring to it. So I came back thinking I had nothing to lose.” As the exhaustive interview process with the 12 trustees began, it became increasingly apparent to Campbell “that the ideas that I was bringing to the table seemed to be very much resonating with the ideas and concerns they had”.

The economic downturn is bound to have an impact on the museum’s air of impregnability. As things stand, Campbell’s talk is of evolution not revolution. “I’m not like Obama having to come in with many things to work on. I don’t have two wars to sort out. This institution has had a period under a man who will go down in history as one of the great directors of all time. The museum is heading in the right direction. But having been here for 14 years I have the benefit of an insider’s point of view, understanding the strengths of the institution, but perhaps also having a sense of areas in which I can develop and build.”

What that actually means will emerge slowly over the years of Campbell’s own stewardship. But he talks in general terms about “putting the same creativity and energy that we put into the exhibition programme into our permanent collections” and “addressing audiences to whom the European art history tradition is not so familiar while harnessing modern technology to make sure we can deliver information at different levels for those who want it. The last thing I want to do is to turn the galleries into overly didactic settings, as has been the case in some institutions, where you get overly controlled interpretative guidelines, words that can’t be more than two syllables long.”

This need to make more creative use of what’s already in the museum is partly pragmatic. Since 9/11 it has been getting more expensive to mount the big international loan shows. “It’s because of the cost of terrorism insurance,” explains Campbell, “and so many institutions are now trying to charge loan fees.” Presumably when they look at the deep pockets of the Met they must be tempted to put the price up. “Certainly many people look at the Met and dollar signs go off in their eyes. Obviously we are a well-funded institutions in comparison to many others. We will continue to organise them but especially in the current circumstances we need to ensure that we are putting the same creativity that we put into the exhibition programme into our permanent collections.”

What that means in practical terms is that future visitors to the museum may find themselves wandering round its miles of corridors with a discreet electronic device pre-loaded with a mini-essay on every item in every collection. Campbell’s own device bleeps. Time’s up.

“I spent 14 years as a curator here keeping my schedule as empty as possible so I could write and research,” he says. “Two days after my appointment my diary was taken over by the director’s office and now my time is scheduled in 30-minute increments.” That is his life from now on until years hence when the hope is that another exhibition will celebrate the glories of his own long tenure.

Jasper Rees is a British writer and arts journalist, and a founder of the culture website theartsdesk.com. Among his published books is “I Found My Horn”, which has also been adapted for theatre. 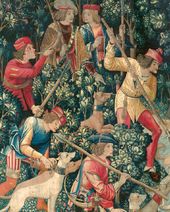 Tapestry in the Baroque: Threads of Splendor (2007)
Installation view 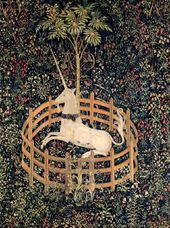 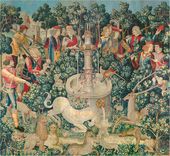 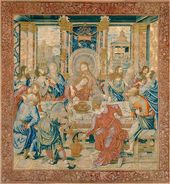 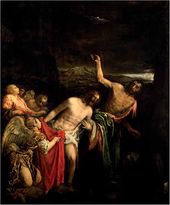