Gormley was born in 1950 in London. After graduation from Trinity College, Cambridge, with a degree in archaeology, anthropology and art history, he left Britain and travelled in India. When he returned to London three years later, he continued his education at Central Saint Martin’s College of Art & Design, Goldsmiths College, and at the Slade School of Art.

He is widely viewed as a sculptor who shifted the focus of modern sculpture back to the image of the human being. A concentration on a wide range of subjects related to the material environment, which distinguished his early artwork in the 1970s, by the early 1980s was replaced with close attention to the human body, which became the main object of the sculptor’s work. In the 1980s Gormley created statues imaging anthropomorphic figures in a wide variety of poses, some of them fanciful and painful. His figures, of nearly human size, sited indoors or outdoors, represent allegories of elemental forces, times of day, calm or motion, and different emotional states: "Three Ways” (1981), "Land Sea and Air” (1982), "Fall” (1983), "Proof” (1984), "Earth (and Water)” (1985), "Sound II” (1986), and others. In some of the pieces created then the presence of a human being is felt only by the very trace of it - a shadow, contour, footprint or an impression made by a body on clay or gouged on a stone: "Bed” (1981), "Heavy Stone IV” (1982), "Still Falling” (1983).

In the 1990s the artist, without digressing from his main theme, started to study, by means of art, the problems of community born out of interaction of individualities (in the series of projects "Field”, 1991-2003; "Another Place”, 1997-2005). During the next decade, the sculptor has been losing interest in mass and volume and refocusing on attempts to sculpturally and visually embody the ideas of energy fields, systems and vectors that emerge as the result of interaction of separate parts ("Inside Australia”, 2002-2003, "Blind Light” 2007-2009).

At this period he conceived the idea of the "Domain Field” project, implemented in 2003 with the support of the BALTIC Center for Contemporary Art (U K). It was no coincidence that this installation - one of Gormley’s most eye-catching and innovative works - was chosen for his first major show in Russia, organized by the Center for Contemporary Culture Garage in 2009.

Gormley placed statues of people in an exhibition space with white walls - overall, 287 life-size figures were created for the installation. Each was fashioned after a real person, with residents of the British cities Newcastle and Gateshead, aged between two and 85, as models. During the first stage of the project, a specially-trained team moulded in plaster the volunteers’ bodies. Then, using the moulds, sculptures were made - thin stainless steel bars welded together.

Certainly, the concept itself reminds one of the terracotta warriors of the Chinese emperor Qin Shi Huang, where the image of every warrior is individualized. This parallel is also obvious in Gormley’s other pieces - first of all, in the series of installations under the generic name "Field”, with its clay-made objects. A huge army of anthropomorphous figures takes up the entire space of the exhibition, thus barring the entrance to the space they occupy. The only way to view the figures is through an open door. This is akin to the perception of a painting - one can immerse oneself in the space of a painting through one’s eyes but cannot enter it. The opposition "I and the Others” is materialized here in a most dramatic way.

In the "Domain Fields” installation, on the contrary, the figures are immaterial, translucent and appear weightless. Like in a light pencilled sketch, the figures’ volume is barely traced in the space with angular, short steel rods. The figures do not share a common shape, and they also differ in density - the forms alternatively condense and melt into the air.

This effect of such virtual presence of a multitude of people - men and women, old people and children - greatly intrigues and captivates the viewer who has found himself inside the "domain field”. This resembles most human memory governed by its own rules of space and time. "We can all bring our own memories to this place,” Gormley says about this installation. "The field acts as a filter: perhaps with certain sculptures a certain memory of a particular person may occur to you. These are subtle bodies derived from material bodies. The point that I am making is that the subject of the work is not just in the works themselves, nor are they simply a formal exercise - it’s a relation of viewers and the work.”[1] The figures shot through with emptiness from every side spring to life and materialize only when they come in touch with live people: "The sculptures call for what they lack: movement, thought, feeling, life. They call upon our conscience, our feeling, our movement, and we become part of the work.”[2]

In his practice of art, Antony Gormley assigns a special place to the viewer - the place of enthusiastic co-author whose input is vital for the very existence of modern art: "Without being seen or physically experienced, the work has no value, no function. Once it is in relation to the movement of people it has a kind of transferred energy.”[3] A reverse process is important too: "The threshold ... reminds you of your own scale. Once you cross it you go into a strange zone, where you are testing yourself - losing and perhaps finding. The idea of reconnection comes up - you can’t connect with a wider context of life, or its inner necessity, until you are lost. Any new experience should be a question of losing your coordinates. Hopefully you come back and find your home again but through a different aperture.”[4]

Just as important is the threshold of estrangement in Antony Gormley’s installations sited outside museums or exhibition spaces, in an authentic natural or urban environment. Much public attention was given to Gormley’s project "Another Place” - it features dozens of statues imaging the sculptor himself, which were sited on Crosby Beach in Merseyside, and left to the will of water and wind. The figures are especially impressive during a high tide or a storm, when they are awash with water.

A human figure within the space of a megalopolis, no longer protected by architecture, became the main theme of the project "Event Horizon”, which premiered in London in 2007. The name chosen for the installation is a term borrowed by the vocabulary of culture from mathematical jargon - it denotes a boundary in time and space between those phenomena that can be changed or foreseen, and those that cannot be changed or known beforehand. First in London, then in New York (2010) and Hong Kong (2015-2016), dozens of statues - the artist’s alter ego sculptures - were mounted on pedestrian parts of the streets and roof tops. The project gives a new perspective of space in a metropolis and encourages contemplation about the role of a human being in this space - his physical and mental presence, with his feelings, emotions and memories.

All of Gormley’s artwork, starting from the 1990s, is distinguished by attention to its viewers - their individualities, along with cultural and national identities. The series of installations titled "Field”, carried out, in succession, on five continents, became a milestone in his career. For each of the projects, local residents created thousands of clay figures - highly generalized and at the same time individualized images. Then, according to the sculptor’s idea, they were arrayed within a chosen installation space.

In his other projects, too, Gormley has used volunteer participants who created objects. Highly inclusive, his art destroys the caste insularity dominating the modern art community. Thus, the principle of collective creative endeavour is at the core of Gormley’s installation "Clay and the Collective Body” unveiled in the spring of 2009 in Helsinki. A huge cube of clay weighing more than 100 tons, initially exhibited in a specially created building, later was offered up as a material for moulding, to be used by more than 2,000 participants, whose creations filled up the exhibition space. Gormley’s masterclass at the Garage Centre, in conjunction with the Moscow show in 2009, was a continuation of sorts of this project.

The surprising role exchange, when ordinary people become creators of sculptural forms, makes one reflect on authorship and viewership, on who creates art and to whom it is addressed. Precisely these subjects are tackled in one of Gormley’s prominent works "One & Other” - a live artwork, sited in 2009 on Trafalgar Square in London. For 100 days 2,400 volunteers, one after another, in an uninterrupted succession, spent an hour each on a plinth as a "live statue”. They were allowed to do whatever they liked - singing, dancing, reciting verse, being themselves or impersonating some other person.

A classic of modern art who has won top prizes and the most prestigious awards in the field of the visual arts, Antony Gormley never stops looking for new forms of expression. It is proved by his latest exhibitions and projects that explore the role of a human being in today’s world and cultural environment. Maybe for some young Russian artists acquaintance with his artwork at his solo exhibitions at the Garage Center for Contemporary Culture (2009) and the Hermitage (2011-2012) will become a turning point in their lives. 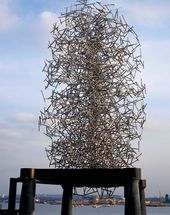 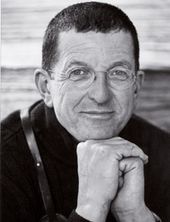 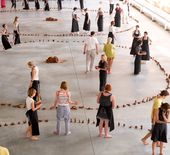 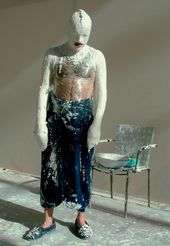 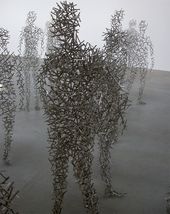 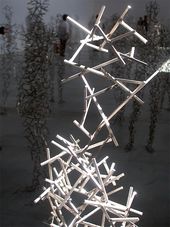 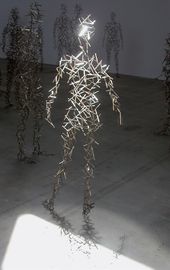