Born in Canada, Lewis (who dropped his first birth name, Percy, from an early age) was brought up in England from his youth, studied at (and was expelled from) the Slade School of Fine Art in London, and it is with that country that his artistic and literary heritage is associated. In itself, that was no exception for his time: two of his close friends, also major figures of modernism, T.S. Eliot and Ezra Pound (who provided the suggestion for the title of the Vorticism movement, following a phrase from the Italian futurist Umberto Boccioni) were both from America, the former settling permanently in England and becoming "more English than the English”, the latter remaining something of a nomad throughout his life. Like Pound, Lewis flirted with fascism throughout the 1930s, though he clearly recanted, long before Pound (an admirer especially of Mussolini through World War II), well before the start of that conflict, having seen the consequences of anti-semitism through his own eyes.

It’s hard not to see Lewis as a contradictory figure, whose reputation remains underestimated, perhaps because of the sheer variety of the forms in which he worked; however, his reputation was more than endorsed by his contemporaries. Eliot described him as "the most fascinating personality of our time ... the most distinguished living novelist”; Pound called him "the only living novelist who can be compared to Dostoevsky”. Major oil portraits, as well as plentiful paper studies, of both of them have pride of place in the NPG show, as do portraits on paper of the fourth master of modernist literature in the English language of the time, James Joyce.

Best known in art history as the initiator of Vorticism, a harsh, even cruel form of modernism that drew from, but went further than, Futurism and reflected the realities of the period of the beginning of World War I (in which Lewis served), a central interest of the NPG show is how his modernist techniques match with the historical tradition of portraiture. Though some of the work shown could be called more conventional - commissioned portraits, often when Lewis was distinctly short of money - the outstanding work, including a major series of self-portraits, blends the two into what Lewis believed was a European tradition.

Thus, he wrote in later years, as cited in the exhibition catalogue: "The reality that is reflected in some portraits (but not I am afraid those painted very recently) is so fresh and delicate, as in the case of the great familiar portraits of the Renaissance, that it is, while you gaze at these reflections, like living yourself, in a peculiar immortality... A portrait evidently ceases to be a portrait when it has that transporting effect that makes you feel, not only that you are sharing a moment of life removed by centuries from your lifetime, but also that you are participating in a heightened life, the living of which only is an event as solitary and fixed as the thing at which you are gazing.” His 1921 self-portrait "Portrait of the Artist as the Painter Raphael” pays tribute to such historical roots.

His championing of work on paper, a form that dominated the London exhibition, also comes from a European, perhaps more than English, tradition. "It is always necessary to remember that oil paint, as used in the West (pigments mixed with oils, and applied to a strip of canvas or wood) does not possess any mystical advantage over images - representational or otherwise - done with lead or ink upon a strip of paper. Paper even has some notable advantages over canvas and wood, aside from the question of scale. Purer linear effects, especially of an improvisational nature, can be obtained with a dry pointed instrument upon a piece of paper, than with a wet and more blunt one upon a pigmented surface,” Lewis wrote in 1932. Form and character blend marvellously in portraits by Lewis, who was described by his senior contemporary Walter Sickert - the founder of the Camden Town Group, with which Lewis was associated in the early 1910s before he established Vorticism, and himself no great sympathizer with modernism - as "the greatest portraitist of this or any other time”. It seems characteristic that many of the subjects of his major oil portraits look down, away from the artist’s gaze, in some sort of contemplation (and often, hands and other limb details are also left uncompleted). Any degree of eye contact is very rare indeed: in the classic 1939 portrait of Ezra Pound, the poet’s eyes are closed as he reclines in an armchair.

The same is true of his portrait from the year before of T.S. Eliot, which captures a private introspection, with the poet dressed in a three-piece suit. That proved the most scandalous portrait of Lewis’ colourful career, given that it was rejected by selectors for a 1938 Royal Academy show (prompting the eminent academician Augustus John to resign from that institution). If there is a reason for that, other than the Academy’s institutional conservatism, it may be the use of symbolic background, in this case two pillars, one vaguely phallic, the other a bird’s nest, symbolizing, critics argue, the male and female poles of creation. In the Pound portrait, there is a similar background of shards of pottery and a view of the sea, that Lewis consciously attributed to the poet’s empathy with Ancient Greece. Both works were sold for very small amounts to money, showing that the artist’s popularity was far from great in his time.

That left Lewis, particularly in the 1920s, dependent on regular private patronage from figures from Britain’s aristocratic or prosperous post-World War I literary and artistic world, whom he would ruthlessly satirize in his 1930 novel "The Apes of God”. Among them was the writer Edith Sitwell, along with her brothers Osbert and Sacherevell, together a literary mini-dynasty of their time. The Bloomsbury Group as well came in for attack, though that did not stop Lewis sketching one of its leading proponents, the novelist Virginia Woolf.

Lewis’s highly stylized portrait of Edith Sitwell, again painted against a background suggesting classical learning and literature, is dated from 1923-1935, and Sitwell claimed that she sat for six days a week over ten months for the final version. There are striking resemblances to a more abstract portrait (given that is not attributed to any sitter), titled "Praxitella”, begun in 1920 - almost a robotic depiction of the female form, where colour and shape seem to draw on Futurism, but move far beyond it. It seems to follow, the critic and exhibition curator Paul Edwards writes, the dictum to be found in Lewis’s first major modernist novel "Tarr” (published in 1918), in which Lewis depicted himself loosely as the protagonist: "[it] explains that works of art have no 'inside’, no 'restless ego’ living in their interior, having instead a kind of 'dead’ version of living through their forms and surfaces alone”.

Such determined attention comes through also in his last portrait, from 1949, of T.S. Eliot, when his rapidly encroaching blindness had him needing to "draw up very close to the sitter to see exactly how the hair sprouted out of the forehead, and how the curl of the nostril wound up into the dark interior of the nose”.

His contradictory character certainly showed in his relationship with Sitwell, as it did with many of his patrons. Lewis would later write of Edith Sitwell: "We are two good old enemies, Edith and I, inseparables in fact. I do not think I should be exaggerating if I described myself as Miss Edith Sitwell’s favourite enemy.” Clearly not making a good impression was something of a gift for the artist: Ernest Hemingway, in his memoir "A Moveable Feast” of Paris in the 1920s described Lewis as looking like an "unsuccessful rapist”, while the leftleaning poet W.H. Auden had him, in his fascist-sympathising years, as "that lonely old volcano of the Right”.

Despite a character that was certainly pugnacious - two of his magazines following the demise of the Vorticist "Blast”, with its aggressive typefaces, were titled "The Tyro” and "The Enemy”, while another project from 1914 was named the "Rebel Art Centre” - his portraits of his contemporaries, from the Sitwells to the Bloomsbury Group, even though he would ridicule them in his novels, were genuinely insightful, and predominantly sympathetic.

As are, to a high degree, the series of tender portraits of Gladys Hoskins, whom he named Froanna, and married in 1930; he had known her since 1918, and they had lived together for some years before their marriage. The couple went to North America in 1939, returning to England only at the end of the war, and Lewis’s attempts to find portrait commissions in America and Canada bore little fruit, though he survived on teaching and education work. The experience is described in his late masterpiece novel, from 1954, "Self-Condemned”. His blindness reached a point where in 1951 he announced his retirement as art critic for the weekly magazine "The Listener” in a moving essay titled "The Sea-Mists of the Winter”. "Pushed into an unlighted room, the door banged and locked for ever, I shall then have to light a lamp of aggressive voltage in my mind to keep at bay the night,” the artist wrote. As a writer, he would continue to produce another seven books, scrawling, six or seven lines to a page on paper he could not see, the result deciphered by helpers, Froanna included. A year before his death in 1957, Lewis was honoured with a retrospective at London’s Tate Gallery, devoted to his involvement with Vorticism: its title "Wyndham Lewis and Vorticism” paid plain tribute to the driving force behind that movement.

It was a belated tribute to one of the most remarkable, if contradictory, individuals of British culture of the first half of the 20th century. Lewis’s prose writing remains virtually out of print - in the case of some of his polemics, arguably deservedly, in the case of his major fiction, completely not so. His paintings and drawings are scattered, largely around British regional museums. It can only be hoped that the National Portrait Gallery exhibition will be the first stage in the renewal of the reputation of a major artist. 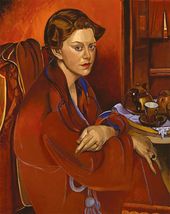 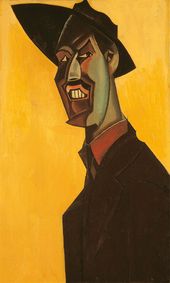 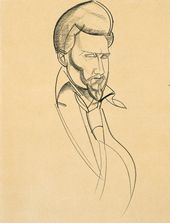 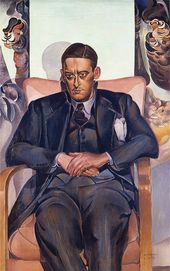