In the autumn of 2008 “Alexander Tokarev. Man Orchestra” will open to visitors - first in the Exhibition Hall of the Tolmachy corpus of the Tretyakov Gallery, then in the Russian Museum’s Marble Palace. The title of the show reflects one of Alexander Tokarev’s brightest series and the main theme of his art. “Man Orchestra” is the artist himself, his perpetual symbolical self-portrait, as well as a visual counterpart of the most diverse musical themes and - in a broad sense - reflections about the image of the author in modern visual art, the image of the artist in his contemporary world and society.

Alexander Tokarev was bom in Odessa — a city of musicians, storytellers and comic writers. His parents, who graduated after World War II from the Leningrad Repin Institute of Visual Art, Sculpture and Architecture, were superb artists. After graduating from the Odessa Art College, Alexander Tokarev enrolled at the State Institute of Cinema (VGIK) in Moscow, where in addition to film design classes he also attended film directing classes at Alexandra Khokhlova’s (Tretyakova-Botkina) workshop. Since 1966 he has participated in Moscow, republican and national exhibitions. In the 1970s he worked a lot as a painter, muralist, graphic artist, while at the same time writing scripts and directing musical films.

However, such forays into film-making were not satisfactory: in 1981 his first full-length film was re-edited “for censorship considerations” and went into distribution under a different name than initially conceived. Then perestroika began, with new winds of freedom, and borders and new opportunities opened up. Many artists declared themselves non-conformists and set about trying their luck in the West; others mounted offensive and shocking shows in Russia. Tokarev would have none of either; he neither left the country nor joined any of the groups. Having withstood the numerous temptations of the time, he developed an individual artistic method based on a philosophical interpretation of reality.

Alexander Tokarev’s art is a liberal interplay of musical forms and mythological narratives, and a search for metaphors and means of expression for eternal themes. The artist would find a unifying theme, then improvise with it indefinitely just like jazz musicians vary different tunes — “standards”.

Each one of Tokarev’s series — “Man Orchestra”, “Man Theatre”, “Man Zoo”, “God’s Toys. Knobs and Armrests” and others — are like a theme with a peculiar conventional style and imagery. Drawing the viewers into the improvisations, the artist invites them to freely reflect about the different realities of our life.

“Memory” from the polyptych “Garland of Sonnets” is the image of a boy walking along a fairy-tale town where toy pyramids turned into houses. “Fatherland”: a silvery pigeon-house with white and red birds and a wide open door looking like a black hole-cum abyss and, at the same time, the “Black Square”.

Thanks to the “jazz” method Tokarev is always versatile and recognizable not so much by his trappings, such as style and manner, as by the array of metaphors — multi-layered and polysemic.

Tokarev’s art is full of contrasts, bright, luscious, imbued with a southern sunlight. The artist sometimes goes to the extreme working with colour — he harmonizes forms, rhythms and the most surprising colour combinations, which, within the structure of his paintings, seem quite consistent and even natural. In this “parallel” world, as in reality, day replaces night. The “sunny” reality reflecting the richness, fullness, jolly side and theatralization of life is replaced with the “moon” theme of loneliness, suspenseful light, creativity, and artist- recluse.

Two contrasting tonalities — major and minor — are dramatically united in a single visual text. In the “Opera” triptych dedicated to the memory of Mstislav Rostropovich they are clearly expressed through the symbolism of narrative, and the colour scheme: “The Toast”, the triptych centerpiece, with a splash of colour and light and with a character looking like young Bacchus; “moonlike” in its mood “Cradle”, the left piece, featuring a cello case and a baby inside — nearly a literal quote from an autobiographic story of the famed cello player; and, finally, “The Silenced Violoncello”, the right piece, in minor tonality, cut across with a blue flame in major tonality like a last chord, to be followed by a solemn silence.

Tokarev is one of the rare artists producing big-scale pieces — polyptychs consisting of five and more parts. In terms of magnitude and concept they are akin to major projects in symphonic music and literature: one is reminded here about Wagner’s “The Ring of the Nibelungs”, Dante’s “Divine Comedy”, Balzac’s “Human Comedy”, Proust’s “In Search of Lost Time”, and the like. The visual narratives with a nearly epic sweep unfold in front of us like hypertexts combining layers of meaning of different depths. Tokarev’s polyptychs share with the epic genre a common theme of destiny, or fate, characteristic for his art in recent years.

“Polyptych has an unlimited potential,” explained Alexander Tokarev. “When parts get multiplied by each other, in terms of meaning and emotion, the resulting amount increases manifold. And like a crazed gambler in a casino, you bet all the chips on red. Your win is immaterial. The risk grows, but the sensation is so gripping, the capabilities open up so vastly that you cannot stop. What is at stake is an Accrual of Meanings.”

In the polyptychs, like in a theatre of his own, the artist is the playwright, director and actor. His “Theatre of Life” seamlessly brings together divine and human comedies, epic saga and a theatre of the absurd, reality and mythology. Ultimately, a synthesis of all components is achieved — the cosubordination of meanings, melodies, rhythms, volumes, colour spots and forms.

The perfection and harmony of every part creates the effect of a solo music instrument, while all parts together form a com- pex structure. This is a monolithic orchestra of soloists.

The organizers of the exhibition “Alexander Tokarev. Man Orchestra” in the Tretyakov Gallery and Russian Museum thank Banque Societe Generale Vostok for the support of the project and help in its realization. 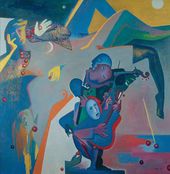 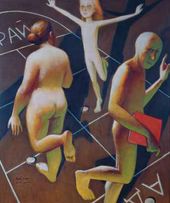 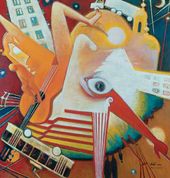 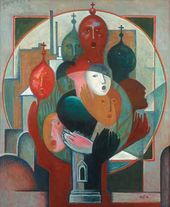