About Vladimir Lubarov and His True-life Stories

Vladimir Lubarov’s solo exhibition “The Nation of Peremilovo: Scenes from a Provincial Life” opened at the Tolmachy Exhibition Hall of the Tretyakov Gallery on September 5, and ran through until September 28. It featured over 70 paintings and graphic pieces from the 1990s-2000s from the series such as “Peremilovo Village”, “The Township of Shchipok”, “Flood”, “Welcome and Cheers”, and “Luck of the Jewish”. Vladimir Lubarov is a famous artist and illustrator of more than 100 books of authors such as, Edgar Allan Poe, Jules Verne, Ernst Theodor Wilhelm Hoffmann, Nikolai Gogol, and the Strugatsky brothers. Having moved in the 1990s to a rural area, the artist started to work on an original series of paintings focused on the life of the Russian provinces.

Lubarov’s show brought to our attention the work of this original artist, bringing us re-appraise many things, discovering the new, surprising world of his pictures, and making us pay attention to that which previously eluded us.

Vladimir Lubarov matured as a professional artist early in life, when he was still a student at a Moscow secondary art school affiliated with the Surikov Institute, where he received an academic training, learning the fundamentals of classic art. Lubarov’s choice of the profession of book designer and further apprenticeship under Andrei Goncharov at the Moscow Institute of Printing enabled him to overcome the naturalism of artistic vision and formed pivotal principles of his art. From then on Lubarov’s artistic quest was focused on primitivism and the style of cheap popular prints.

His reflection on the smallest details of human existence, insights into the essence of their interaction with the individual, study of the boundary between life and existence — all this was displayed already in the artist’s illustrations to literary works. Lubarov relied on the same principles illustrating the “Khimiya I Zhizn” (Chemistry and Life) magazine, where he worked as a chief artist for a long time.

Looking at Lubarov’s pictures (“pinups”, as he calls them), we understand that everything in them is a fruit of the artist’s imagination. It seems that we and the pictures’ characters reside in different worlds. And yet, both the viewers and the characters have a feeling that we all are within each other’s call, that we are together and exist outside of time and space. The world of Lubarov’s pictures is important for us and needed by us; this world resides in each one of us, and each one of us has a different idea about this world.

This may seem a paradox, but Lubarov’s rendition of his visionary world first of all is pivoted around the principles of genre art. Traditional genre art includes folk scenes and scenes from private life; its main principle has always consisted in the idea of everyday life as a realm of the individual’s emotional existence. One can say that the principles of this genre were reconsidered in the art of the Russian avant-garde, in particular, in the oeuvre of Marc Chagall, where existence, rather than everyday life, is the backbone of the imagery, and details of everyday life seem to epitomize the essence of the world.

Certainly, it would not be true to say that Lubarov’s art is directly rooted in Chagall’s. But the distinctive features of Lubarov’s creative idiom — symbols as the basis of genre and the author’s imagination instead of the specificity of folklore — have kinship with the principles of Chagalls’s genre art series ( as in “Saturday”; “I Can Fly”, 2003).

Lubarov’s entire life and art consist of two distinct periods: prior to the 1990s and afterwards, when he moved to the village of Peremilovo. It was here that he set about the series of pictures featured at his solo exhibition — “The Peremilovo Village”, “The Township of Shchipok”, “Flood”, and “Welcome and Cheers”. It was there, in the Peremilovo village located along the border between the Vladimir and Yaroslavl regions, that Vladimir Lubarov discovered his world. The main theme of this world, a world which sometimes appears simple-minded, grows out of Russian classic literature, Alexander Pushkin, Nikolai Gogol, and Fyodor Dostoevsky — the theme of a “small man”’s life. This man, as it seems, has not achieved anything special in life or climbed high up a social ladder, and yet, he lives in a world full of harmony and emotional riches. All of Lubarov’s series of pictures share this tone of compassion and love for this man who gets along in spite of all the calamities and adversities of life.

And it turns out that the geese, apple cores, cigarette stubs under the feet, empty tin cans, a smiling cat with a mermaid smoking a cigarette are an indispensable and important part of our life. At times we cannot figure out what touches us, what scares us, what saddens us, what appears naive. But looking at Lubarov’s characters we become convinced that it is in little details, to which we often do not pay attention, that the real value of life resides. The proportions between reality and imagination in Lubarov’s pieces vary. But the main features of his pieces are the presence of a narrative and a plot.

In spite of the reality of the connections between viewers and works, we understand that these points of contact were created by Lubarov’s artistic imagination. Upon these points the artist builds his associations and metaphors, behind which he hides the main idea of his art: that life is inexhaustible.

And maybe Lubarov’s pictures are his questions to himself and to us?

What are these pigeons — are they just birds fed by old Jews seated on a bench near a fence in a shtetl (“Pigeons”, 1998)? Or is it the Holy Ghost who descends on every one who does the feeding?

How did He and She find each other amidst the Great Flood? (“Meeting”, 2006 from the “Flood” series)?

Whither the old bare-footed man is carrying his guardian angel? (“Guardian Angel”, 1999). Who guards whom?

Where is the man in a flat cap with an angel perched on his haunches going (“Lane”, 2005, from the “Flood” series)? We see that our guardian angels are as unprotected as little children, and the artist Lubarov tells us to take care of them.

The artist’s broad-minded vision of the world and mankind, the way he directly engages each of us attracted the attention of the widest audience to his solo show at the Tretyakov Gallery. 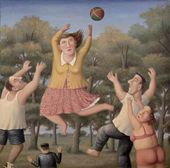 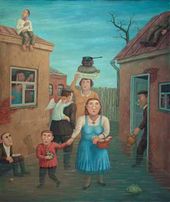 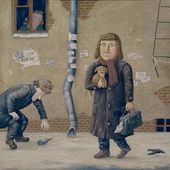