THE MUSEUM ON THE BELAYA RIVER

The Bashkir Art Museum named after Mikhail Nesterov is one of Russia’s oldest. It was founded on November 7 1919, and opened for visitors on January 5 1920.

The beginning of its collection and the foundation of the museum are connected with the name of the outstanding Russian artist Mikhail Nesterov (1862-1942), who was born in Ufa. Wishing to contribute to the artistic education of his fellow-countrymen, the artist donated to his native city his own collection of Russian works of art of the second half of the 19th and early 20th centuries, in all 102 pictures, including works by Ilya Repin, Ivan Shishkin, Vladimir Makovsky, Nikolai Yaroshenko, Vasily Polenov, Isaac Levitan, Konstantin Korovin, Alexander Golovin, Alexander Benois, Abram Arkhipov, Nikolai Roerich, and other well-known artists.

The most precious part of Nesterov's gift included 30 pictures painted by the artist himself (portraits, landscapes and genre compositions). As a result of the museum's work and subsequent donations by the artist and members of his family, the collection of Nesterov's pictures now numbers 107 exhibits, which is one of the best and biggest in Russia. Chronologically, it includes his works created between 1878 and 1919 (only a few pictures date from later years). This chronological character of the collection has a certain principle, namely, it was in that period that Nesterov's ethical and aesthetic views were formed and materialized. Their essence was to revive the human soul and spirit in a secluded life close to nature, and in harmony with it.

At first it was decided to place the artist's gift in the Aksakov People's House (now the Bashkir Opera and Ballet Theatre), which was being built at the time, but due to the dragging out of that building's construction, the collection was kept at the Historical Museum in Moscow. The pictures were brought to Ufa only on October 9 1919, by Nesterov's friend, the well-known Moscow architect Ilya Bondarenko (1870-1947), who was also Ufa-born, who became the first curator of the museum.

The museum was housed in the former mansion of the timber merchant M. Laptev built in the moderne style by the architect Alexander Shcherbachev in 1913.

In the 1920s and 1930s the collection was enlarged with pictures from Moscow and Petrograd museum funds. During that period canvases by outstanding Russian artists like Konstantin Korovin, Pavel Kuznetsov, Leonard (Leonid) Turzhansky, Ivan Kramskoi, Vasily Perov, Mikhail Vrubel, Valentin Serov, and others were added to the Ufa museum collection. Thanks to Nesterov's personal efforts, the Russian Museum presented the Bashkir Museum with several pictures in 1929, which were real treasures of its collection. Among those were "Night in Venice” by Ivan Aivazovsky, "Bashkir Horseman” by Alexander Orlovsky, "After the Rain” by Ivan Stefanovsky, as well as works by Nikolai Ge, Alexei Kharlamov and Nikolai Roerich.

In the 1920s the foundations for a collection of ancient Russian art were laid, and in the 1920s-1930s the main collection of Russian and Western art came into being. Apart from such sources, pictures were donated by the Ufa municipal council, the social security department, the Aksakov library and private individuals. In subsequent decades the treasury of the museum was constantly replenished, as a result of which its main collections were formed: "Ancient Russian Art”, "Russian Art of the 18th-early 20th Century”, "West European Art of the 16th-19th Centuries”, "Art of Japan and China”, "Soviet Fine Art”, "Bashkir Folk Decorative Applied Art”, and "Contemporary Fine Art of the Republic of Bashkortostan”.

The collection of Russian art of the 18th - early 20th centuries consists of several collections, each one of its own value.

The museum collection of paintings by one of the most outstanding figures of the Russian avant-garde of the early 20th century, David Burlyuk (1882-1967) is of special value. The collection consists of 37 canvases made (except for one) during his stay in Bashkiria in 1915-1918.

In the collection of West European art there are paintings by Philips Wouwerman, Giovanni-Paolo Pannini, Canaletto, Nicolas Poussin, Francois Gerard, Claude Vernet, Nicolas Lancret, Ludolf Backhuysen, Abraham Storck, and others, as well as etchings of the 15th-19th centuries, representing well-known schools of etching in England, Germany, Holland, Italy, France, and also sculptures by Danish, Italian and French masters of the 18th-19th century.

A considerable part of the museum collection is taken up by Bashkir folk decorative applied art works - unique samples of weaving, embroidery, woodcarving, jewellery and costume of the 18th-early 20th centuries, and also paintings by artists of Bashkortostan in the 20th and early 21st century. The latter collection is the museum's largest. It includes works by the founders of Bashkir fine art - Kasim Devletkildeyev, Alexander Tyulkin, Maria Elgashtina, Ivan Uryadov and Anatolii Lezhnev, as well as those by artists of the 1950s-1970s: Rashid Nurmukhametov, Akhmat Lutfullin, Boris Domashnikov, Alexander Burzyantsev, Alexei Kuznetsov, Adiya Sitdikova, Tamara Nechayeva, Mukhamed Arslanov, Galiya Imasheva, Zilfat Basyrov and Ernst Saitov, to mention but a few. Fine art of the 1980s and 1990s and the early 21st century is represented by many artists of various aesthetic trends and members of different artistic associations and groups which have appeared in the republic recently (like the groups "Mart”, "Inzer”, "Sary Biya”, "Genghiz Khan” and "Artysh”).

At present the collection of the Bashkir Museum of Art, named after Mikhail Nesterov in 1 954, includes more than 10,000 exhibits.

The exhibition at the Tretyakov Gallery, arranged within the framework of the federal project "Russia's Golden Map”, and timed to mark the 450th anniversary of Bashkiria's voluntary accession to Russia, includes selected works by four artists only - Mikhail Nesterov, David Burlyuk, Kasim Devletkildeyev and Alexander Tyulkin. These names are the most important ones for Bashkortostan in terms of the artistic quality of their works, and their contribution to the republic's art and culture. Besides, they vividly reflect the multinational character of Bashkir fine art, its generic variety and inimitable originality and imagery. It is to be hoped that these names will be remembered by the Moscow public also because of the uniqueness of the collection of the Bashkir Nesterov Museum of Art. 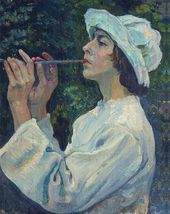 Mikhail NESTEROV. The Resurrection of Lazarus. 1900
(fragment). Oil on canvas. 66.6 by 74.6 cm. The painting did not survive; Nesterov created it while working on a mural on the same subject for the Alexander Nevsky church in Abastuman (1899–1904). Later the artist destroyed it 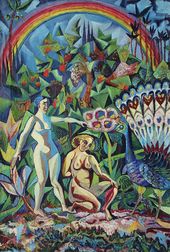 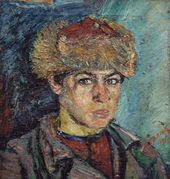 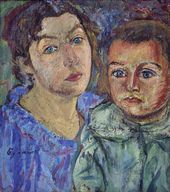 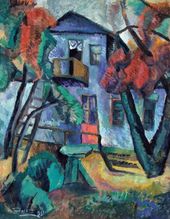 Alexander TYULKIN. A Small Courtyard at a Country House. 1919
Tempera on cardboard. 71 by 55 cm 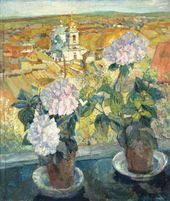 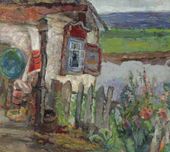 Kasim DEVLETKILDEYEV. Porch of a Bashkir Peasant Hut. 1928
Watercolour on paper. 29.1 by 47 cm 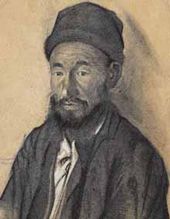 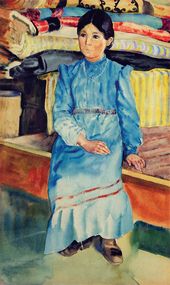 Kasim DEVLETKILDEYEV. Bashkir Girl in a Blue Dress. 1928
Watercolour on paper. 50 by 30 cm