I met Konstantin Mikhailovich Kuzginov in the early 1960s at the home of our mutual acquaintance, the artist Igor Gryuntal. Introducing Kostya to me, Gryuntal said, "And here is the author of the famous Festival Daisy..." I looked with interest at the artist who had designed the popular symbol of the Moscow World Youth and Students Festival in 1957. Athletic and forceful as he was, Kostya resembled Kirill Stolyarov, the then popular Soviet movie star, even though Kostya was somewhat shorter than him. 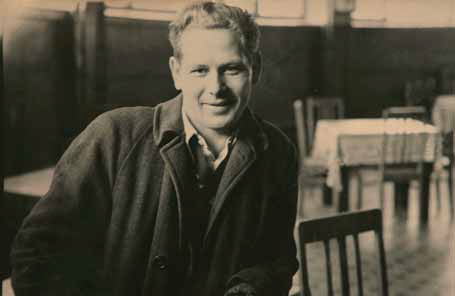 Konstantin Mikhailovich was born on December 22 1913, not far from Saransk, into the family of a provincial Russian teacher Mikhail Vasilievich Kuzginov. When Konstantin's father died, the family moved to Moscow.

Before World War II, he had managed to complete a training course with the Factory and Plant Vocational School, and worked as a smith, later completing a course with the fine arts studio at the Zuev Club, and a course affiliated with the Malyutin Factory for admission to university, and then the Moscow Art College named after the 1905 Revolution.

In 1941 he was drafted and left for active service. Being very athletic, and with a top category status in wrestling, he joined the sports department of the Stalin Institute, and later taught physical training in the Arzamas Machine Gun and Mortar Cadet College. Then, with the Second Byelorussian Army he saw the end of the war in the Polish city of Stettin. In 1945, with the rank of lieutenant, he returned home to a peacetime career.

In the first years following the war, and later, he actively collaborated with many Moscow publishing houses, also joining the Moscow Union of Artists. In 1948 Kuzginov began working with the All-Union Chamber of Commerce, executing a number of panels for international exhibitions in Germany, France, Italy, Finland, and India. He also designed posters, with six of them sent to festivals of Youth and Students in Berlin and Bucharest, designed brochures, catalogues, and worked with the monthly magazines "Znanie-Sila”, "Murzilka” and others. 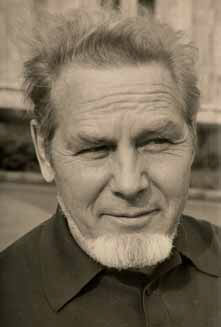 On the eve of the Moscow World Festival of Youth and Students he designed the logo for the event, which later became known as the Festival Daisy. This logo was approved by the Vienna Congress of the World Federation for Democratic Youth for all later forums. In 1958, Kuzginov was elected a People's Deputy from the Sverdlovsk District Council of Moscow.

Today, Lyubov Konstantinovna Azhaeva-Borisova, a wonderful artist who works amazingly with both painting and graphic media, continues the work of her father. Her personality is akin to his - with the same uncompromising straightforwardness.

Kostya painted and drew many works in a "plein air” environment, from nature: in subways, in parks, among crowds and in open empty spaces when he went fishing, which was his favorite pastime. He would not leave his house without a sketchbook. One of his students recalled: "If I forgot my sketchbook at home, Konstantin Mikhailovich would tell me, 'Draw it with your eye! Follow with your eye the entire way as if you were drawing it all along, tracing it with your brush; then, when you come home, you won't have any difficulty placing this landscape on canvas or paper.'”

Kuzginov's approach to drawing from nature - whether a landscape, a still life or a portrait - is exceptionally appealing to me. It is obvious that this is the work of a brave, self-confident and accomplished artist who is an absolute master on a given sheet of paper - rather than an "accidental guest” on it. The artist's hand is completely in control of the reflection of nature. Such an impression results from the artist's complete capability in drawing and, in the words of art expert William Meiland, of the artist's "talent of contemplation”. It is a talent fully demonstrated by the best of Russian landscape painters of the 19 th and 20th centuries, beginning with Fyodor Vasiliev, Alexei Savrasov, Isaac Levitan, Valentin Serov, and running down all the way to the later period with such masters as Sergei Gerasimov, Nikolai Krymov and others. Most of Kuzginov's works were made in a complex technique of gouache, the transparency of which is comparable to watercolours: his pieces draw in with their sense of immediacy. Such are the portraits of Lithuanian fishermen, and his landscapes which are particularly appealing to me as well as his series of fantastic children's portraits.

The geographical scale of the works the artist completed is amazingly wide, and includes the Baltic Republics, the Kola Peninsula, Ukraine, Tatarstan, and, of course, his favorite areas around Moscow.

When I look at landscapes by Konstantin Kuzginov, it seems to me that, having survived the war, he immensely enjoyed his newly-discovered immersion into the peaceful life of the country, his "dive into the aroma” of the Motherland - with its fields, forests, and rivers. This "intoxication with the Motherland” can be felt in all of Kuzginov's works, along with the period of their creation, which is extremely precious in itself.

His youngest daughter recalls that on his trips, on which she often accompanied him, the artist would spend mornings and evenings drawing sketches. If he couldn't put something on a canvas or a paper, he then wrote it down in his notebook, registering it as an emotion he felt.

But let us get back to the Festival logo which is now an image from history, recognized internationally. Now, when we mark the anniversary of the Moscow Festival of Youth and Students, we find it difficult to explain to today's youth its huge significance for young people in the 1950s. It became an enormous breakthrough into the world surrounding us: undoubtedly, it was a historic milestone. And for me, it is particularly pleasant that a person dear to my heart and our wonderful artist, Konstantin Mikhailovich Kuzginov, made such an important contribution into its success. 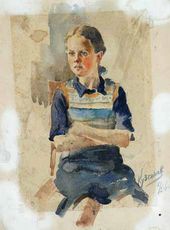 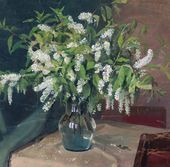 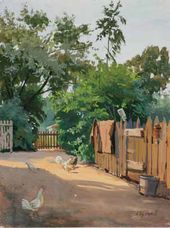 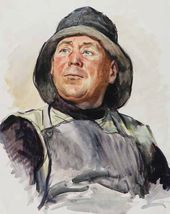 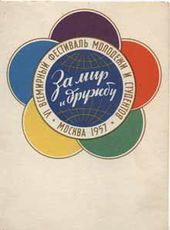 The original of the emblem, “Festival Daisy”. 1957