ART MOSCOW 2007: The Beginning of Entropy

This year has proved something of a confirmation for Art Moscow, the only international contemporary art fair in Russia: According to Vasily Bichkov, Director of the Expo-Park Company, this is the first time when the event was actually profitable (last year, the organizers hardly broke even, managing only to cover expenses, while earlier Art Moscow was expressly unprofitable). The officially announced profit was almost $10 million, with about half of the money coming from actual sales and the other half the price of reserved pieces.

The annual Expert Council of Art Moscow 2007 included Aidan Salakhova, Elena Selina, and Marat Guelman, Russian gallery owners, as well as Austria's Hans Knoll and Germany's Volker Diehl, a founder of Art-Forum in Berlin. Even though the rent for exhibition display space has significantly increased, this year the Organizing Committee received more applications than ever - 220, out of which a record 73 were selected. Guelman believes that as a result, the fair ended up with quite a number of galleries and projects of an evidently low quality. Such an opinion was confirmed, for instance, by a distinctly weak project "For Sound” displayed at the entrance to the exhibition, created by sculptor Yury Kalendarev. It is remarkably reminiscent of a gigantic xylophone similar to the one installed in the Kolomenskoye Park, with the only difference that in the Central House of Artists it was proudly referred to as "sound plates”.

As far as the range and quality of presented art was concerned, the fair contained no dramatic surprises, with the overall tone set mostly by certain highlights: the wild psychedelic mimicking of socialist realism in the works of Dubosarsky-Vinogradov was replaced by its "serious” imitation in the works of Semyon Agroskin. However, some better quality samples of post-Soviet painting came from Ukrainian rather than Russian artists, among them Alexander Gnylisky and Maxim Mamsikov.

The alliance of the Yakut and Triumph galleries has definitely proved an advantage for the former: its open flirtation with totalitarian aesthetics is now softened by pro-Western pieces by Maxim Ksyuta from Triumph. Art from the AES+F group was not particularly remarkable this year: much effort of the artists must have been consumed by their preparations for individual exhibitions in the Russian Museum and the Venice Biennale. At the same time, the "children's” aesthetics was picked up by Oleg Kulik who presented an absolutely authentic and completely irony-free media image of a smiling child. A pleasant variation of the familiar range came in the works presented by XL and Guelman galleries: both included rather interesting pieces by the young artists Irina Korina (XL) and Diana Machulina (Guelman). Finally, the powerful, wholesome and convincing participation of Roza Azora Gallery included an impressive solo exhibition by Alyona Kirtsova.

As for Western galleries, the top-of-the-list and successful Forsblom (from Finland) presented paintings by Georg Bazelitz and Peter Halle, sculpture from Marcus Lyuperts and Keith Hering and a video installation by Tony Oursler.

Glance Gallery from Turin headed by former Russian citizen Nadezhda Stepanova presented a multi-national group of artists, thus expressing the interests of the Italian public which likes variety and is not subject to cultural chauvinism. Interestingly, some of their works - such as silk screen stencils upon embroidery by Kent Henrichsen in which masked individuals try to steal charming shepherd girls - were reminiscent of the works of Russian Young Conceptualists such as the Fenso Group. The Parisian Iragui Gallery known for its links with the latest "medical and hermeneutic” generation filled its display stands with graphics by Pavel Pepershtein and Ivan Razumov, photos by PG group and the Fourth Height, which for some reason are not quite popular with Russian galleries.

Therefore, Art Moscow has turned into a profit-making and credible investment project. And yet no noticeable investments have been made by its organizers. Although the rent rates were different this year, the quality of lighting, carpeting, temporary partitions and furniture remained the same. Nothing new was introduced into the design of the fair's catalogue, or in the general decoration of the fair. Wi-Fi was not available. While the previous fairs typically included an extensive nonprofit programme - among them, conferences by Victor Miziano, performances by Radek and flash mob acts, along with brilliant displays - this year there was virtually no alternatives to coldblooded money-making.

Only one project - ArtKommunalka (Art Communal Apartment) - proved a pleasant exception. The programme announced itself as a reality show with the actual participation of artists. The curator Antonio Geusa admitted that the project's format may vary under the influence of participating artists; thus, viewers watched an updated version of artistic squatting of the 1990s with its extraordinarily welcoming creative atmosphere, excluding envy or competition forced by the mass media, rather than yet another copycat of Big Brother Seven participants - Vika Begalskaya, Vladislav Efimov, Elena Kovilina, Anton Litvin, Mikhail Mitaev (co-author of Vladislav Mamyshev-Monro who got ill), Diana Machulina, and Sergei Shutov, spent five days living together, with no one "voted off,” and final prizes won by all participants. Natalia Kosolapova, Director of the MARS Contemporary Art Center, which organized the project promised to display works of artists completed over the time in ArtKommunalka, at the M'ARS's exhibition in October.

The main message of ArtKommunalka's organizers and participants to their viewers was about a huge hidden potential of art, its integrating force, and its empowerment against the ready-made prescriptions of mass culture. Such integration was regrettably lacking among the fair's organizers and participants. Obvious negligence of the event's planning displayed by the fair's organizers resulted in wide-spread "emigre” moods among galleries, along with hopes connected with the Moscow International Salon of Fine Arts. However, the event's reputation cannot be borrowed from elsewhere; it should be cultivated within its framework, otherwise there is a risk of being "neither fish nor flesh”. 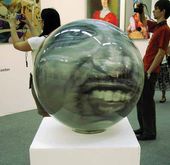 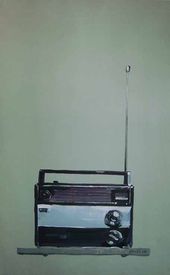 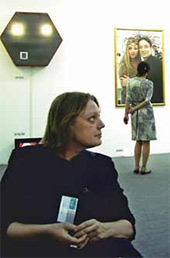 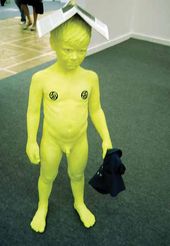 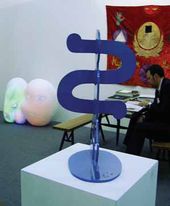 Display of Forsblom, Helsinki. On the wall: Works by Tony Oursler and Sergei Bugaev-Afrika. In the foreground: Keith HERING, S-Man. 1987. Plastic 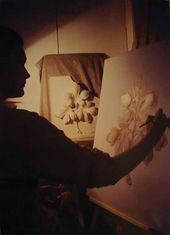 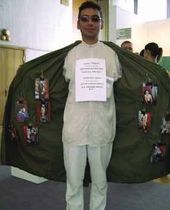 Alexander Petrelli presents in his Palto Gallery the project by Viktoria Begalskaya “The Dream of V.A. about B.A.” Photo, 2007 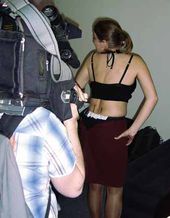