Weight and weightlessness are physical - and also philosophical - categories. All the heaviest and lightest things have their pronounced philosophy. Weights and a road roller are the Caesar and Augustus of the “Empire of Weight”. Allied to it is the “Empire of Imponderability”, the heroes of which are paper aeroplanes and boats, champagne bubbles and fluff from poplars flying into your face.

The sculptor Mikhail Dronov, fascinated by the philosophy of weight, develops Newton's ideas in the sphere of plastic arts. He represents the asphalt roller as an ideal machine for the total levelling and smoothing of roughness ("The Best Machine", 2003); the road roller is the closest relative of office paperweights and drawing-pins. These phenomenal articles are used for attaching every single thing unalterably and forever to its place. The dictatorship of weight, expressed in a sculptural item - that is high artistic philosophy! Not long ago Claas Oldenburg represented a common, standard thing as a majestic architectural monument in a vast space (metal bolt, scissors, clothes-peg): thanks to the imaginary scale, something ordinary has become super-symbolic.

This kind of monumental hyperrealism is interpreted by Mikhail Dronov in his own way. His immense steel drawing-pin becomes a subject with two essences - at the same time a "big office" item and a model of a discoid "space body". We think of water as being eternally changeable, transparent and elusive. But it also has its strict countable parameters - weight, volume and a chemical formula. Dronov represents water's "physical philosophy" in a weighty bronze cube named «1 km3 H2O» (2005). A cubic kilometre of water collected (or rather cast) in this cube is an inspiring sight. The "petrified" waters of the Red Sea must have looked like this when Moses was crossing it with his people. The whole of Pharaoh's army could not have drunk a cubic kilometre of water to the dregs!

Having represented "the heaviest", Dronov is also inspired by "the lightest". He sculpts in bronze a paper aeroplane ("The Aeroplane", 2001) and a paper boat ("The Little Boat", 2000), reproducing all paper's tactile and texture qualities and even its colour! He appeals to "the element of fabric" - not grafted or pinned but freely enveloping bodies, shapes and space. The energy of folds is defined by the body's energy and wind's changeable mood. The folds of a light flowing fabric are the face and profile of the wind. In the composition "Evening in Byzantium I" (2000) the artist makes a "portrait" of the wind of the Mediterranean, the wind of the Christian Middle Ages, the wind of spiritual liberation... In 1998 there appears a cycle of works named "The Last Day of Pompeii". A moment of life is stopped and embodied in a female torso's perfect shape. The artist opts for a hollow form, and the clothes, the folded fabric, and the weightless cover appear as metaphors of a light body.

Dronov's stylistics has shown elements of evolution. In his compositions from the 1980s, priority is given to the documentary nature of the plot and physical details. The artist often selects characters driven by circumstance into extreme conditions, forgotten by God and society. "The Saxophonist" (1987) , in village winter clothes, earns his living on the street. Fortune has turned away from him but his musical instrument is as sacred for him as a relic.

Such works of the 1980s can be considered as a kind of hyperrealism of plot that was peculiar to the "Peredvizhniki" (Wanderers) movement. The artist balances on the boundary between moral teaching and sad irony, as he represents an elderly man in worn-out clothes and old shoes, working as a cleaner ("Major-general Klavdij Alexandrovich Komarovskij-Eshappar de Bion- court, Commanding Officer in the Emperor's Own Uhlan Life-Guards, Retired", 1985).

Dronov is preoccupied with a "philosophical" question - what is the secret of people "with a name"? How does a "name" appear from obscurity? "Einstein" (1984) is represented without any false pathos - quite ordinarily. He looks like hundreds of thousands of men in their standard long coats and bowler hats pulled over their eyes. The character is "hiding" behind his common camouflage clothes.

Another variant of the artist's "staging" is the group portrait "Wise Men" (1989), where he represented his friends as classical and oriental sages.

In the composition "The Grossmeister" (1988) the artist sculpted himself on a throne. Its high back with the monogram "D.M." (Mikhail Dronov) is crowned with Napoleon's cocked hat. The character "tries on" the historical throne, as chess-men swept off the board lie scattered on his lap.

The artist's interest is the king's archetype as it appears in fairy tales and folklore. According to the idea of the general public, a king - like a president - should be young, energetic, successful and self-assured. Dronov created his "atypical" 'The Sad King" (1987) and 'The Old King" (1995). These character-philosophers, deprived of representative features, are an image of the "king's essence" seen through the prism of folklore.

At the end of the 1980s and in the 1990s Dronov sets up his easily recognizable artistic style, inventing his own game world, one existing in parallel to the real one. There emerges a whole parody of a pantheon, similar to the artistic fantasies of the postmodernists.

The artist imitates the cult statuettes of ancient inhabitants of the Earth - "Robin Hood" (1996), "The Hunter" (1997) - and creates imaginary anthropomorphical beings which seem to have come from the world of the spirits, as in "Night Guests" (1987).

The characters from this imaginary world are given an unusual appearance. 'The Rain Man" (1992) has a "diagonal-dropping" body structure, with oblique lines crossing his body, forming a stylish graphic pattern. "The Ferryman" (1989), taking souls across the dead waters, has two faces, three eyes and two small oars, while a diver ("The Champion", 1996) has a dolphin's fin growing on his back. The main figure of this imaginary pantheon is twins. The most radical metamorphosis is the accretion of two and more figures into one "collective" multiheaded body of 'The Octopus" (1994).

Playing the role of script-writer, Dronov creates an authorial universe into which the heroes of classical myths are free to enter. At the same time they undergo a parody of transformation. From a terrible biblical warrior, "Holofernes" (1994) turns into a dreamy contemplator of the starry sky. In "Three Graces" (1995) three figures coalesce into one, forming a visual rebus in the manner of the polyphonic compositions of Paul Klee and Joan Miro. 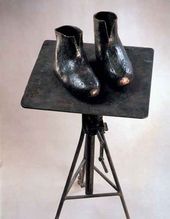 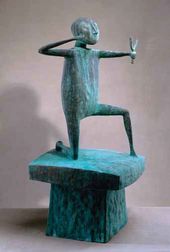 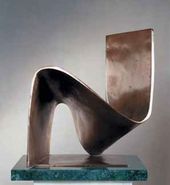 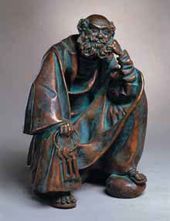