Tribute to the Album

THE IMME DIATE IMPRESSION OF ANY VIEWER SEEING THE ALBUM "THE ICON COLLECTION IN THE TRETYAKOV GALLERY" IS TO FEEL THE IMPULSE TO EXCLAIM "SPLEN DID!" PUBLISHED TO MARK THE 150TH ANNIVERSARY OF THE TREASURE HOUSE OF RUSSIAN ART BY THE SCANRUS PUBLISHING HOUSE AND FINANCED BY THE MEMBER OF THE BOARD OF TRUSTEES OF THE TRETYAKOV GALLERY VITALY MACHITSKI THIS UNIQUE PUBLICATION BRINGS TO MIND THE LINES OF PUSHKIN: "THE MUSES AT WORK ESCHEW ADO, THE BEAUTIFUL MUST BE MAJ ESTIC." MODERN PUBLISHING DEVOTED TO THE POPULA RIZATION OF THE HISTORY OF INTERNATIONAL ART IS AMAZINGLY DIVERSE, AND THE BOOK MAR KET HAS A WIDE VARIETY OF PUBLICATIONS TO OFFER. REGRETTABLY, IT SHOULD BE NOTED THAT THE QUALITY OF ART BOOKS AND ALBUMS PUBLISHED TODAY VERY RARELY MATCHES THEIR QUANTITY. RE-ISSUES OF POPULAR WESTERN ALBUM SERIES, TRANSLATED INTO RUSSIAN, MAKE OUR BOOKSTORES LOOK LIKE THEIR LONDON OR PARIS COUNTERPARTS. THIS IS GOOD BECAUSE NOW EVERY PERSON WHO IS MORE OR LESS INTERESTED IN THE HISTORY OF ARCHITECTU RE, PAINTING AND SCULPTURE CAN FIND AS MUCH INFOR MATION AS HE OR SHE NEEDS ABOUT THE SUBJECT CONCER NED AND CAN ACQUIRE THE BOOKS FOR ANY PRIVATE LIBRA RY. HOWEVER, COMING ACROSS A REAL GEM, THE ONE THAT MAKES THE BUYER OF A NEW PUBLICATION FEEL THE JOY OF DISCOVERY AND APPRECIATE THE BOOK'S LASTING VALUE - ALAS, THIS DOES NOT HAPPEN OFTEN. 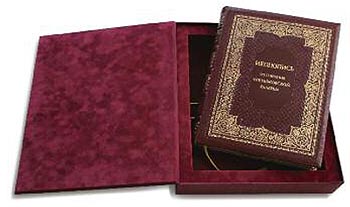 As an individual who has been acquiring for almost 50 years nearly all publications on Old Russian art, I pursue collecting not only as a specialist who has dedicated his whole life to the restoration and study of icons. My love for books, reverential and profound, reaches beyond the book's contents or the information contained in it. I know "by sight" every tome in my library and in every book, no matter how modest its design, I discover attractive features, memorable for the "singularity of the expression". As for massive monographs, sumptuous albums or authoritative catalogues, I study them so tenderly and thoroughly as if I am conversing with a live person. I developed this attitude mostly because in every publication of which I have had the good fortune to be the author, my participation amounted not only to compiling or writing, but also to working with photographers, artists, typesetters, zincographers, printers and heads of printing plants.

Early in my life - in the blessed 1960s - I became involved in publishing works of art to whose restoration and discovery I contributed. The Russian printing industry, especially with respect to art albums and art scholars' monographs, left much to be desired, to put it mildly. But there were fortunate exceptions as well. The icons that I included in the first major album "Old Russian Painting. New Discoveries" were restored at the All-Russian Restoration Centre and became the strictest "judges" when the album was being printed. A high quality photographer Ivan Petrov, who worked at the Centre for many years, made photos of the icons using colour-separated negative plates. Every photographed icon or its fragment was thoroughly studied by printers at the Printhouse No. 5; especially for them, the restorers made excellent coloured copies, and the proofing was done straight from the originals, using museum-like lighting, at the Marfo-Mariinsky convent. The work took a lot of time to accomplish, but the result exceeded expectations: the album, to use the modern expression, became a bestseller and was instantly bought up by artists, art scholars and all those who were interested in Old Russian icons. The numerous reviews praised above all the high quality of its printing and the unerring taste of the album's compositional design. Even the "Burlington Magazine", the prim and proper British publication, ran a review by a famous Byzantine scholar D.T. Rice, who expressed surprise and delight at a product of Soviet printers of so high a quality. Later, I was working for 25 years with an excellent photographer Stanislav Zimnokh, who graduated from the cinematography department of VGIK (the Soviet State Institute of Cinematography) and was the first Soviet photographer to photograph artworks using colour transparencies. You could not find a more thoughtful partner and a stricter and more demanding professional. Our books, albums, catalogues and prospectuses devoted to restorers' discoveries and museums' treasures - if lined up on a bookshelf, they would take up a lot of space - all of them were brought to life through Stanislav Zimnokh's energetic effort. The process of turning a transparency, no matter how good, into a printed illustration is hard indeed. The goal can be attained only at the rarest moments when your professional and personal commitment is at its highest. I am sure that the excellent artistic and printing quality of the album "The Icon Collection in the Tretyakov Gallery" is the result of such dedicated effort on the part of all of the album's makers - from the compiling editor to the photographers, designers, and printers.

"Top-quality" is the most fitting word for the album, made by knowledgeable and careful hands - every detail, every dot and dash has a certain meaning, all of them together forming a well-knit structure which makes the album a landmark standing out against numerous publications devoted to this chapter in art history.

The introduction to the album, composed by Nadezhda Beke-neva, the head of the Tretyakov Gallery's Old Russian Art department, is distinguished for its pithiness and exacting specificity, introducing the reader to the history of Russian icon painting and tracing the story of the formation of the richest collection, which includes unique artefacts of the i2th-i9th centuries. The comments to every icon in the album were written by specialists who know very well the works they describe, and therefore their words are rich in information and appreciably complement the images. The grouping of the artwork reproductions according to the major art centres of Old Rus is reasonable and wise, because it helps to avoid confusion and misunderstanding that can interfere with digesting the history of icon-painting. The icon-painters' brief biographies and the glossary of terms that are not always comprehensible and accessible to the general reader - these features are appropriate and absolutely indispensable.

The album's design and layout are distinguished by a classical austerity, which one is tempted to call a beauty in simplicity, or a simplicity in beauty. The icons feel at ease on the wide white margins -they, so to speak, have enough air to breathe and look solemn and impressive.

The details were selected by the album's editors with a purpose to give the reader insights into the old masters' creative process and help to realize the conceptual and artistic substance of the artwork created by them. A sense of proportion is characteristic of everyone who contributed to this magnificent album. The good taste of the authors and designers, complemented with the high quality of the printing, where nearly every illustration is a life-like reproduction of the original - all this helps to imprint on the viewer's memory the subtlest nuances of the masterpieces presented, even if it cannot substitute for the sensations that a real-life visit to the Old Russian rooms of the gallery would evoke.

This is the second time in the last few years that I am experiencing a true joy and delight perusing a publication on Old Russian art - believe me, this happens very rarely indeed. Two years ago I was stunned and delighted by the album of the artist and photographer Yury Kholdin "Through the Veil of Five Centuries", where for the first time I saw the frescoes by Dionysius, which I adore, reproduced with a quality of photofixation and print unprecedented to date. After that meeting I partnered with this talented master, working in the "Frescoes of Old Rus" foundation established by Kholdin and arranging the photographer's brilliant shows in different Russian museums. Today I rejoice at the success of many of my colleagues at the Tretyakov Gallery, as well as their associates, who produced the album "The Icon Collection in the Tretyakov Gallery" - it was not accidentally that I mentioned the word tribute.

Publishing this album was tantamount to paying a tribute to all those who contributed to the establishment of a collection that meets the highest world standards. The album's authors pay respect to the collectors and discoverers of Russian icon-painting, the gifted restorers, the thoughtful custodians who devoted their entire lives to the Old Russian Art Department of the Tretyakov Gallery, and to the prominent scholars of Russian iconography. The new album continues the traditions of Russian art criticism devoted to Old Russian art -traditions commenced by the luminaries who were capable of talking about the greatest achievements of Russian genius using a language that befitted the subject and was free from the donnishness and pseu-do-imitativeness, an offence commonly committed by modern art scholars, who speak and write expansively, boringly and incomprehensibly.

Let us hope that such publications as the album "The Icon Collection in the Tretyakov Gallery" make public the great artistic and cultural legacy, and give everybody the opportunity to appreciate those great masters of Old Russian art who created it, and whose names are associated with it in the world.

Having said what I wanted to say, I would like to pay tribute to the team whose united and enthusiastic efforts made this publication possible. They are Lydia lovleva, editor; Tatiana Volkova, editor-in-chief; Elizaveta Volkova, editor of the Russian edition; Dmitry Melnik, designer; Valentin Sklyarov, chief-photographer; Natella Voiskounski, editor of the English edition; Tom Birchenough, style editor. The fact that this album has a twin publication in English makes it accessible to a foreign audience. 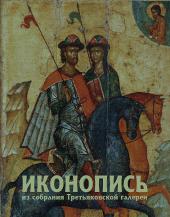 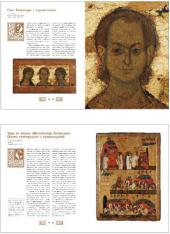 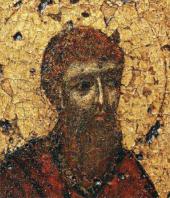 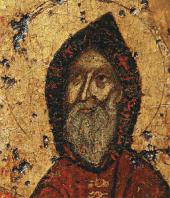 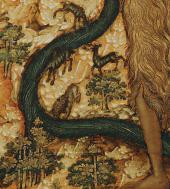 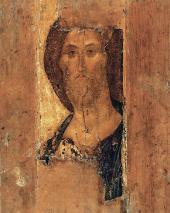 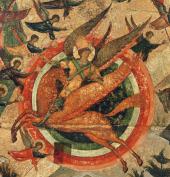 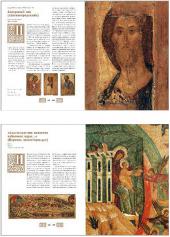