Modern Russian Giants at the Hermitage

With every new event, the Hermitage’s approach to modern art exhibitions becomes clearer. We are already accustomed to seeing the work of cult Western European and American artists in this world-famous museum: a renowned centre of knowledge and research in the art world, the Hermitage pays regular tribute to the acclaimed masters of modernity. Visitors to the Hermitage have been able to enjoy Picasso’s late works, masterpieces of German expressionist art and excellent paintings by the likes of Andy Warhol, the Cobra group, George Segal and Cy Twombly.

The Hermitage's policy on showing works by well-known contemporary Russian artists is, however, less clear. With their fine set of rooms, the former Russian army headquarters, seat of the Revolutionary Military Committee, have already become a stage for a series of bold experiments allowing the museum to hone its exhibition strategy. In theory, the aesthetic and conceptual flaws of any contemporary art event can always be ascribed to original experiment. The status of the Hermitage, however, is such that it obliges this museum to be flawless, adopting only winning strategies and finding none but the most convincing solutions. A single rash decision, albeit dictated by innovative experimentation, could damage the museum's reputation, and today, given the hordes of mercilessly ambitious artists besieging all large museums, the danger of taking such a decision is great indeed.

The Ilya Kabakov exhibition "Happening in the Museum” (Sluchai v Muzeye) was, if not a novel initiative, at least a totally safe bet. One of the founders of Moscow conceptualism and sots-art, Kabakov found international fame after moving to the West. The first artist to build bridges between contemporary Russian painting and international art, Kabakov fires the imagination with his paradoxical aesthetics. The two short Vadim Voinov exhibitions held by the Hermitage prior to the momentous Kabakov event could be seen as preparation for some massive and inevitable occurrence. History, however, will grant each artist his rightful place.

In order to appreciate the true boldness and perspicacity of the Hermitage's planning, one must realise that contemporary Russian art encompasses far more than drawing and painting. To gain the respect of critics and fellow artists, the contemporary Russian painter must not only show a solid and original mastery of his art, but also offer something of a more theoretical nature. A mere declaration of ideas is usually insufficient: the artist must present his theory or concept convincingly, using innovative means. Not all painters can boast the required range of conceptual and episte mological skills. This, however, is the main thrust of the Hermitage's policy on contemporary Russian art: the museum gives priority to conceptual pioneers. Naturally, the aesthetic and conceptual elements of any painter's art should be in harmony if it is to carry weight. This is seldom the case, however.

Confronted by the West, with its different values, aesthetics and mentality, Kabakov adopted a new set of artistic priorities. Ironic humour gave way to a more rational, measured approach. His work acquired the precision of design: constructively integrated into the surrounding natural and architectural landscape, it became grounded on commercial principle, thus losing something of its unpredictable magical force. Drawing on world avant-garde art, Kabakov developed an artistic methodology which is indubitably innovative, albeit based on an already existing artistic and academic paradigm.

It is now important to note that contemporary Western aesthetics have become permeated with imitation, artists and critics alike adhering to pseudo-academic, pseudo-artistic values and methods. In Russia also, alas, art, research and art criticism have been replaced by false counterparts - the result of the democratisation of art and the belief in its accessibility to all. Such was the price of adopting a new paradigm. From now on art will be assessed by its aesthetic interpretation of the mythological element of reality, allowing us to separate true art from all pseudo-endeavours.

The more impressive an artist's intellectual ability, the more skilled he is at dissimulation. Whilst in some works imitation is clearly obvious, in others it can be detected only by the shrewdest critics. Fortunately, history has a habit of unmasking impostors: sooner or later, all camouflage, all disguise is seen through, and the guilty imitator forgotten by the art world. The artist himself is the ultimate judge, however Imitation as a form of irony, or self-irony, is, of course, permissible, provided the artist does not go to excess. An overly heavy approach shows bad taste, and can truly be called the curse of modern art. Fortunately, in his new environment, Ilya Kabakov was able to retain his capacity for self-irony. This sheltered him from danger, enabling him to sail the waves of new artistic trends with great success. Nevertheless, much of the spontaneity and direct, emotional feel of his work was sacrificed in mastering complex new technical methods.

The Hermitage's second large-scale "actual” art project was the Anatoly Belkin exhibition held in the state rooms of the old HQ. Conceptually, this event was utterly different to the first. A subtle and witty master of imitation, Belkin creates an entire archaeological epic intriguingly entitled "Marsh Gold”. Visitors are introduced to a civilisation of midgets that, apparently, once inhabited the Sinyavinsky marshes near St. Petersburg. To illustrate his story, the artist produces not only the detailed technical notes made by members of fictitious expeditions, but also veritable heaps of golden objects fashioned by the mysterious marsh midgets. Faced with such convincing evidence, the viewer finds it difficult to avoid falling into Belkin's highly elaborate trap.

Full of oxymoron, the art of Anatoly Belkin is diverse, complex and paradoxical. A shrewd and sensitive observer, the artist stalks his subject with tireless zeal. His virtual portfolio is always brimming with new ideas, exciting projects for dangerous expeditions, bold hypotheses and novel scientific suggestions. Belkin's outstanding ability to blend art, literature, historical allusion and ethnographic detail shows him to be an artist of a new kind: a romantic, whose work constantly demonstrates the aesthetic value of academic learning. Nevertheless, innovative as he is, Belkin does not transcend the existing artistic and scientific paradigm. Operating within the confines of the current semantic field, he fails to break through to the infinite realm of non-discursive meaning.

If Kabakov's brand of conceptual "actual” art possesses potential for further development, Belkin's initiative is definitely a one-off event: no one will invent new civilisations, compose diaries of fictitious ethnographers or create artificial artefacts after this exhibition. The topic has been exhausted by Belkin: in fulfilling his novel aim so entirely, he has left ample material for thought and inspiration to future explorers of the fantastic.

The first two Vadim Voinov events held by the Hermitage allowed the museum to test its conceptual art exhibition strategy. Assured of its effectiveness, the Hermitage planned the massively successful Kabakov and Belkin exhibitions. Finally, armed with this formidable experience, the museum was able to give the undisputed master of substantiated mythology the opportunity to express himself without reserve. Having opened with Voinov, this important cycle of exhibitions ended with his fundamental event "The State Hermitage Under a Full Moon”.

Not content with its faint shimmering, Voinov demands a full moon in all its majestic metaphysical mystery to shed light on his new astro-constructivist aesthetics. An experienced museum specialist, he contrives not only to show the magic of the meaning of things and to demonstrate objective mythologem as part of a new epistemology based on an as yet unknown paradigm. Besides all this, Voinov succeeds in portraying the almost mystical spirit of the old and abandoned building.

Spurning imitation, Vadim Voinov makes use of original objects only. Perceiving their complex relationships, sensing their mute communication on some different plane, he is able to create semantically convincing material. Intrinsically serious, Voinov touches on themes that could rightfully be called tragic, yet his work is not without humour. The ropes which pass through each room to prevent viewers from touching the artwork on the walls are reminiscent of those of a ship: one gets the feeling of being at sea. In the light of the full moon and somewhat dilapidated decor, the logical conclusion of this layer of meaning is, surely, that one is aboard the notorious Flying Dutchman! Voinov has succeeded in filling his exhibition with the spirit of naval adventure so appealing to the artist.

For each of these wonderful events, the Hermitage produced outstanding albums far more impressive and comprehensive than the average catalogue. Each of these publications could serve as a first-rate guide to the theory, practice and methodology of modern art. The Voinov album is perhaps the most avant-garde of the three, compiled by the artist himself and based on the ideology of his epic dictionary of new mythology. The shrewd reader will immediately realise that the dictionary is an attempt to define the semantic outlines of a new (!) artistic and scientific paradigm, enabling the creative individual to break through to a space filled with infinite meaning. Such is the futuristic value of Voinov's unique third exhibition - indeed, the main service rendered by the artist to the Hermitage and the art of the future.

The quality of the work shown at the Hermitage's conceptual art exhibitions has hitherto remained exceptionally high. Will the museum be able to maintain these impressive standards, or will the persistent newcomers following in the footsteps of these cult pioneers force it to compromise? Time will tell. 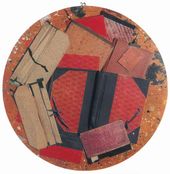 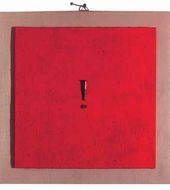 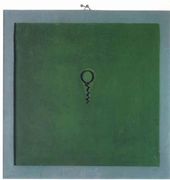 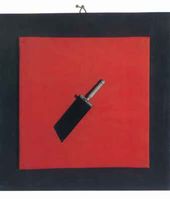 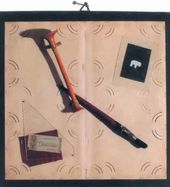 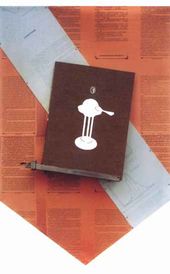