Gifts for the Next 150 Years

The anniversary of the Tretyakov Gallery was accompanied not only by exhibitions and gala celebrations but also by numerous presents from public and state organizations, as well as from individuals and artists which supplemented the museum’s collection with fine works of Russian art.

Among works entering the collection a special place is occupied by the gifts of the Union of Russian Artists which include paintings by such famous Russian artists as Vladimir Stozharov, Vladimir Gavrilov, Gheli Korzhov, Alexei and Sergei Tkachev, Yury Kugatch, Efrem Zverkov, Valentin Sidorov, Dmitry Zhilinsky and Vladimir Sherbakov.

Their art, characterised by individual style, distinctive imagery and spiritual concerns, constitutes a significant part of Russian art and shows that national traditions, originality and profundity remain essential in it. The artists became famous in the 1950s when they overcame the stereotypes of official totalitarian art and turned to contemporary life: for them, truth in life and truth in art were synonymous. Their works are justly accorded major status in 20th century art, enriching Russian museums and galleries and forming part of an anthology of Russian art.

The paintings contributed by the Union broaden our knowledge of the artists' creative activity, individual style and aesthetic principles as well as supplement the works that the gallery possesses. The art of the 1950s and 1960s is usually associated with "severe realism”. However, such a view on the evolution of Russian art is limited and does not consider its multi-faceted and lyric character.

The painters of this generation accumulated the creative experience of their teachers but re-evaluated it, searching for their own artistic identity and style and discovering that interpretation of topical issues could become a new aesthetic category. Thus for Stozharov, Korzhov and the Tkachev brothers, realism, understood not only as a tradition in Russian art but also as an obligatory stage to acquire craftsmanship, became synonymous with their artistic method. At the same time, each of these artists used and developed the experience of their predecessors in a unique way, with particular aesthetic preferences. That is why individual poetic intonations, singular artistic methods and distinctive attitudes are so remarkable in their paintings.

The works of Vladimir Gavrilov included in the collection date back to the 1940s-1970s. They trace the evolution of the unique painter from his early search for an individual lyrical tone and artistic principle to his determined imagery as an accomplished master. The "Nude” painted in 1 950 is one of Gavrilov's early works offered to the Treyakov Gallery. It reminds us of the artist's famous "Fresh Day” and of his words that "the feeling of admiration for life and beauty is eternal as life itself. Among other works by Gavrilov offered to the gallery are his landscapes "River in the Carpathians” (1965) and "Spring Stream” (1970), both of which give a sense of air and light. The choice of colours is very rich, the subtle play of undertones and reflected flashes creating the effect of interaction between water, air and space. Special attention should be paid to the one of the latest works of the artist, his study for the painting "Dmitry Feodorovitch and His Adopted Son”, created in 1972. We can feel that the painter possessed a wisdom and experience of life that permitted him to contemplate human destiny, and that he had a complicated life story, in the end of which he found himself confronted with his memories and lost hopes.

The paintings of Vladimir Stozharov, one of the most popular artists of his generation who made a major contribution to the development of landscape, are very different in theme and emotion from those of Gavrilov. His bright and vivid landscapes and still-lifes have always attracted the public by their light, scale and philosophical profundity. The artist's landscapes are very different from the realistic landscapes of the time. Their intensity, a particular organisation of space and the choice of colours are illustrated by the paintings offered to the gallery. Such works as "Karpogori”, "Karpogori, The Well”, "Galich”, "The Village of Fishermen” and "Still-life with Painted Arc” were created by Stazharov during his trips to the Kostroma and the Arkhangel regions and the Komi republic in the 1960s. They are a rich supplement to the works of this unequalled artist already owned by the Tretyakov Gallery.

Among other works, the Union granted four still-lifes by Gheli Korzhev, author of a pathetic series - monumental in its imagery - "Burnt by War” and other paintings, including works of the 1970s-1980s. The still-life was one of the most important art forms for Korzhev as well as a means of experimentation. An expert at composition painting, he paid considerable attention to form and details, being consistent in the choice of imagery as well as in the execution of large-scale paintings. His still-lifes are characterised by their psychological expressiveness and philosophical content; they fill the universe of objects with life and sacred meaning, which is illustrated by such paintings given to the gallery as "A Glass of Milk” (1984) and "The Samovar”.

The brothers Alexei and Sergei Tkachev, experts in painting narrative and historical works, are represented by their painting "A Family”. Narrative development and ethical attitude are typical of their paintings - which are to a certain degree autobiographical - as the characters seem close in spirit and destiny to the Tkachevs themselves, while reflecting at the same time the whole epoch.

The Tretyakov Gallery's collection of historical paintings has been enriched by "Local Correspondent” (1967) by Yury Kugatch, author of numerous monumental paintings depicting the Russian past and present: national motifs and a poetical tone prevail in his works. Their lyricism resembles that of such famous landscape painters as Efrem Zverkov and Valentin Sidorov, whose works have been part of the Tretyakov permanent collection for a long time, now supplemented with "Raftsmens' Village” (1968) and "Morning in the Forest” (1972) by Zverkov, and with "It's Snowing” (1969) and "Autumn Leaves” (1970) by Sidorov - all characterised by their soft and poetic tones.

Another landscape given on the anniversary of the Tretyakov is Vladimir Sherbakov's "St. John the Warrior Church in Yakimanka”, from 1970.

Among the 25 paintings received is "Soldiers Bathing”, a large-scale painting by Dmitry Zhilinsky from 1 9581959, better known from its study that belongs to a private collection in the USA and has often been published under the title "Bridge Builders”. After the All-Union Youth Exhibition in 1959 the painting, measuring four metres, has never been exhibited and has been kept in the stores of the Union of Artists. The work needs restoration after which it is take a distinctive place in the gallery's collection. It is one of the earliest works of the artist who is known for such paintings as "The USSR Gymnastics Team”, "Under an Old Apple-tree” and "At the Sea”, exceptional for their virtuoso drawing, artistic accomplishment, imagery and philosophical reflection.

The gift of the Union is supplemented by another one made by the famous Moscow artist Ivan Kazansky on behalf of the Union of Moscow Sculptors. The latter comprises three works created in the 1950s by the remarkable sculptor Dmitry Tsaplin, all of which exemplify his artistic skill and his mastery of form and volume. Little known by Russian art-lovers but highly appreciated by a narrow group of specialists and fellow sculptors, Tsaplin is one of the most distinguished Russian sculptors of the first half of the 20th century. The three works in question are "The Cat”, "The Fish” and "The Eagle” - the sculptor, whose art is rich in themes and develops numerous forms, used natural "artificial” stone for his works depicting the animal kingdom. Another gift from the Union of Moscow Sculptors is "Theatre Square in Moscow in the mid- 19th Century”, a relief created in gal- vanoplastics by the famous artists Ivan Kazansky and Nonna Kazanskaya (Nezlobina). The sculptors show an impressive command of artistic space, high professionalism and spiritual insight.

Several works by the Burganov dynasty have been offered to the gallery by the Burganov House Museum. Its founder Alexander Burganov, who has sculpted numerous monuments including Alexander Pushkin in Washington, donated his marble "Letter”.

Many gifts from artists, art specialists and other donors are worth mentioning and this task, which demands professional approach, time and classification, will be accomplished in the future. The works mentioned here prove that true lovers of Russian art treat the Tretyakov Gallery as an invaluable national asset and part of our spiritual life. 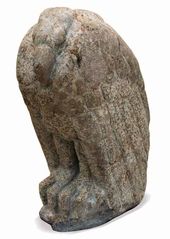 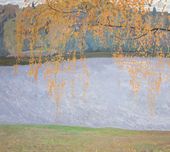 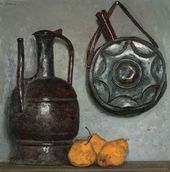 Gheli KORZHEV. Still-life with Pears
Oil on canvas. 70 by 70 cm