Faithful to His Subject: Far Away Yet Close

The creative achievement of any good artist, no matter if he is officially praised and publicly known or not, is his unique contribution to the history of art. Among painters, sculptors and masters of graphic arts who are viewed as representing the generation of the 1960s Vitaly Natanovich Petrov-Kamchatsky has his own, honourable, niche.

A pupil of Mikhail Cheremnykh, Nikolai Ponomaryov and Mikhail Motorin, he committed himself to the traditions of the Moscow school of easel graphics. From his teachers and predecessors he inherited the rare quality of judging his own work from the position of a strict perfectionist; he inherited their professional culture.

The exhibition of works by Petrov-Kamchatsky (1936-1993) that took place in the Russian Academy of Arts this spring well demonstrated his remarkable skill, his wide perception of life, and his talent as a romantic soul.

As a man of purpose, a philosopher, delighted with the inimitable primeval beauty of the surrounding world, Petrov-Kamchatsky was sincere in his delight praising the grandeur of nature. With the brilliant skill of a master of drawing, of an excellent colourist and, one may say, of a magician of black-and-white as well as of colour linocut and lithography Petrov-Kamchatsky introduced in Russian art something of his own vision of dramatic imagery and his specific emotional intonation.

Genuinely dedicated to his work, always developing his artistic potential, the master would never stop experimenting, perfecting the imagery and technique of his graphic and painterly language.

A determined traveller who would seek to picture every momentary change in nature's state, and to show the wonderful, so far unknown - or only from literature and naturalists' narrations - corners of his land, Petrov-Kamchatsky broadened the horizons of Russian art, picturing literally the terra firma of his homeland. Kamchatka became the object of his true affection, of his creative urge. Starting from his first voyages to that far-away area the artist was so much imbued with the epic poesy of the peninsula, the way its native inhabitants lived, their friendliness, hospitability and individuality of character, that the artist decided to add a second name to his surname and became known as the artist Vitaly Petrov-Kamchatsky.

His exhibition in the Academy of Arts was made up mainly of works resulting from his numerous expeditions to the Far East, created either in Kamchatka or on his return home. The linocuts and lithographs, drawings and paintings exhibited in the rooms of the Academy on Prechistinka Street in Moscow convey the excitement and romantic feeling of an artist who sings a hymn to the infinity of time and space, to the organic marriage of man and nature. It is his assured lines, integral composition, sense of light and air, his vast vision of space and the importance he attaches to small details, the "realia” of everyday life of the inhabitants of Kamchatka and Chukotka that creates the poetic intonation of Vitaly Petrov's works from the Far East.

The artists came to like the local people, with whom he made friends and felt at home. He was greatly impressed by their legends and customs which, as he realized, were to convey the spiritual intimacy of their relations with the eternal values of this world. Petrov-Kamchatsky tried to bring this realization into his paintings and graphic works like "Whales Playing” (1975), "Chukchi Having a Talk” (1983), "Starting Out for a Journey” and "Northern Bread” (both 1984), and "A Boat from the Mainland” (1972).

The local people - the Eskimos, Chukchi, Tungus - won the heart of the artist by being as frank as the day and as naive as children. They became his brothers and sisters, because for them it would be unthinkable to cast a shadow on the sincerity of relations with each other by such evils of civilization as envy, for instance.

Petrov-Kamchatsky's graphic suites and separate sheets look like Northern sagas which, though narrated in a language starred with metaphors, follow the harmony of the earthly and the heavenly.

Vitaly Petrov-Kamchatsky was an Associate Member of the Academy of Arts, and Professor and Warden of the Krasnoyarsk State Institute of Arts (1988-1993). The works of the master have become part of Russian artistic heritage, a remarkable page in the history of Russian art. His solo exhibition was well timed to be part of the large- scale campaign to celebrate the 250th anniversary of the Russian Academy of Arts. 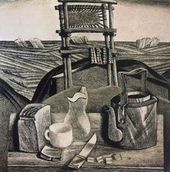 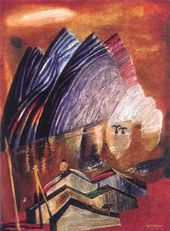