Boris Grigoriev's letter from my collection, published here for the first time, was written just two weeks after Alexander Yakovlev's death. The letter was addressed to Vladimir Bashkirov, a collector and arts patron who knew both artists well. Full of grief for the loss of a friend and a great artist, the letter sheds an additional light on the events described by the American collector and art scholar Martin Birnbaum in his book “Jacovleff and Other Artists”: “Several days later ... what was left from his once gorgeous body destroyed by a malignant tumour was decaying under a cover of scarlet peonies in the Russian church full of incense and chanting, as well as the subdued weeping of many of his friends. His last wish - to have his ashes scattered over the emerald-green waters of his beloved Capri - could not be fulfilled ...”[1]

Boris Grigoriev and Alexander Yakovlev. Two lives so different but remarkably intertwined. A friendship that lasted the length of a lifetime, with each born and dieing in nearly the same years.

Grigoriev was born a year earlier than Yakovlev, in 1886 - and he passed away a year later, in 1939. They first met at the Academy of Fine Arts, where they studied at Dmitry Kardovsky's workshop in 1907. "At the workshop of Kardovsky, who replaced Ilya Repin, I studied for two years, after finishing a Moscow school, at the same time as Alexander Yakovlev, Vasily Shukhaev and Boris Grigoriev. Among them Boris Grigoriev was my closest friend. I was delighted at the acuteness of his discontent. We both admired the craftsmanship of Yakovlev and Shukhaev (Sasha and Yasha, as Alexander Benois called them). Grigoriev and I were interested in the texture of pictorial images, the impressiveness of paints and the character of sitters, while we could watch the phenomenal virtuosity of a pastmaster such as Yakovlev,” reminisced Sergei Sudeikin.[2]

Like Yakovlev, Grigoriev began his career at the "Satyricon” magazine. In 1915-1916 both artists, together with Sudeikin, designed the interior of a cabaret "Prival Komediantov” (The Comedians' Halt). Then the revolution broke out. The Russian community in Paris. The "Mir Iskusstva” (World of Art) society. "The brightest talents among the newest generation of artists are those who matured at the Mir Iskusstva,” remarked Sergey Makovsky in his book "Siluety Russkikh Khudozhnikov” (Profiles of Russian Artists). "Especially noteworthy among them are [Kuzma] Petrov-Vodkin, Boris Grigoriev, Alexander Yakovlev and [Vasily] Shukhaev.”[3]

Not surprisingly, the names of Boris Grigoriev and Alexander Yakovlev, forever inscribed in the annals of Russian artists who lived abroad, were often mentioned side by side.

Guillaume Lerolle called Grigoriev and Yakovlev "the best artists of their nation”.[4] The Boston Herald in a story about the opening of Yakovlev's show in 1934 stressed the Russian style, created with so distinctive a mark of individuality by Grigoriev, [Nicholas] Roerich, Yakovlev and Leo Bakst.”[5]

Alexander Yakovlev [was called] an unsurpassed, phenomenal "master of form”. All his art - full of love for the world, for life, for people "an astonishing art - a brilliance of sportsmanship akin to that of Franz Liszt in music”. Boris Grigoriev – an artist of the Raseya (Russia) of "bast shoes” and "bast”, "the frightening faces one cannot look at without a shiver”,[6] without realizing and feeling that "the glimmer of placid spiritual beauty and clarity and the glimmer of ugliness, the beast's face transpiring through the cover of culture - they live in a friendly and amorous flurry in Grigoriev's pictures”.[7]

Although holding Yakovlev's art in high esteem, Grigoriev nonetheless was a demanding critic: "They write me from Paris that it looks like Yakovlev sold a hundred pieces at the show ... Here is someone I respect and love for his feat, for his work, for everything, although it seems to me that his art has something of a machine in it - I am very strict to myself now - I tear to pieces everything I don't like.”[8] Likewise, Grigoriev disapproved of the ethnographic drawings and paintings that Yakovlev made in his "Black” and "Yellow” expedit- ions[9] - works that caused a sensation, garnering the artist international acclaim and a Legion of Honour award. "I will never stoop to ethnography,” wrote Grigoriev.[10]

Grigoriev placed Yakovlev's piece at the beginning of his famous album "Liki Rossii” (Faces of Russia)[11] - an assemblage of images, mostly portraits, created during the Moscow Art Theatre's tour in Paris. The faces that took the place of the images of Raseya (Russia), "the artist's shift away from the facelessness around him and on to a quest for the face [signalled] a shift that would later bring him to replace the problem of Raseya with the problem of Russia”.[12] The face of the artist himself, and his unquiet soul were truthfully captured in a spontaneous movement by Alexander Yakovlev. Is this the portrait that was hanging over the stairs in Grigoriev's home? Yury Cherkesov reminisced[13] that Grigoriev talked proudly and warmly about Sasha Yakovlev, the painter who created the portrait.

Perfectionism and an exceptional commitment to art distinguished both artists. In 1934 Yakovlev was invited to direct the Department of Painting at the School of the Museum of Fine Arts in Boston. In Sergei Sudeikin's words, "in Boston, where he [Yakovlev] was for two years a professor at the Boston Academy, he made a veritable revolution”.[14] The same about Boris Grigoriev, who in 1928 became the head of the Academy in Chile: "He turned the Academy on its head, firing several professors and overhauling the curriculum

... To this day, people over there refer to him as nothing else than a revolutionist.”[15]

Yakovlev's sudden death in 1938 from cancer was a terrible blow for Grigoriev, who had a presentiment that the same affliction would fall on him too. Barely two months had passed after his friend's death when Grigoriev wrote in a letter: "Well, I'm finished. And so strangely! Almost the same thing as with Yakovlev, the only difference is that I am still alive...”[16] The year when Yakovlev died, his friends - Sergei Sudeikin, Mstislav Dobuzhinsky, and Alexander Benois - wrote articles to honour him. "I wrote a letter to Benois on behalf of all of us, the friends, and I mentioned you as well. If the letter is published, it will make me happy,” wrote Grigoriev in a letter to Sudeikin on May 18 1938. Alexander Benois's article, published in the "Russkie Zapiski”, quoted Grigoriev's words about Sasha Yakovlev, culled from the abo- vementioned letter of May 12 1938.

"In conclusion I want to quote the most treasured words about Yakovlev, said by one of our major artists,” wrote Benois, "who loved him as a person and admired him as an artist.

"'When all the hardened expedition members were falling off their feet with fatigue and asleep, Yakovlev, this great explorer, alone, during the rest intervals on the insane voyage, cheerfully as always and everywhere, and here too, in the deserts, under an equatorial sun, was doing his bit as an artist.

"'A great craftsman and teacher, he performed for free in some American skyscrapers, drawing under everybody's eyes a life-sized picture of a nude female sitter, placed on a bandstand close to the easel ... And after three half-hours, under everybody's eyes an unparalleled piece of art would come about. And when the piece was ready, Yakovlev would smile very nicely, putting on his vest and unrolling the sleeves of his shirt. Those who knew this smile, knew Yakovlev!

"'Once at just such a moment I heard Sudeikin say in an absolutely matter-of- fact voice, "Leonardo da Vinci!” And that unusual evening in New York brought us all together: we all started to go on a first- name basis, and we "commissioned” Yakovlev our collective portrait - Yakovlev did all of us in one evening, on the very day before his departure to Boston, devoting to everyone between 24 and 30 minutes (someone, delighted, was counting the minutes and even seconds). Those present were: Nikolai Remizov, Sergei Sudeikin, Savely Sorin, Konstantin Aldzhalov and (the author of this) Boris Grigoriev.'”[17]

Borisella
May 26 1938
Dear Vladimir, how awful - our Sasha Yakovlev is no more, he died so suddenly from cancer: some say, rectum cancer, others - bladder cancer. It appears that the disease ran in the family. But the poor fellow didn't tell anyone about it and he went to the hospital alone in his car, telling the concierge "he would be back soon". He was operated on ... but there was nothing left to cut out - everything was a rot... then they stitched up the cut and administering him shots of morphine let him die without pains. This is what he said: he didn't want people to see him in such a state and wanted his body cremated and ashes scattered near Capri, at sea ...
Took him to the hospital himself! What a strong will! And now he's gone, and he's no more. This is horrible. I'm literally crying, and so is my wife. And the other day, in some "freemason's lodge" with ridiculous velvet curtains, benches and black people seated on them, with an organ with muted strings and a hissing and a noise under the feet caused by fire - our Sasha was incinerated, and the pile of his ashes was taken out and displayed on a brick - that was Yakovlev. But he will stay, he will always be here, his art will not die!
I'm glum, I'm feeling down. Also because there is a racking pain in my head's right side. It has been aching for three weeks. And there is a sickness in my stomach. I'm eating almost nothing. And my soul has long been sick, aching, depressed.
Am I to see you again?
I wrote you a letter while on the ship, did you receive it?
If you come here, please do visit us at Borisella - everything is so nice and beautiful here. I have a dog-wolf, who is my big friend.
I will be working soon. Received a cable from Sudeikin, elegiac words about Yakovlev.
I hug you - Boris.

Best wishes to your mother and wife

Boris Grigoriev did not attend the funeral service for Alexander Yakovlev. "Our Kirill was there,” wrote Grigoriev in a letter to Sudeikin. "And so he signed on my behalf and kneeling down as everyone there kissed the roses at his feet. I couldn't come, didn't have time...”[18] 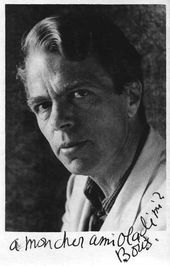 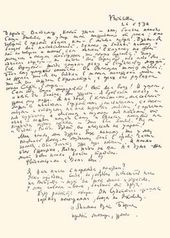 The letter of Boris Grigoriev addressed to Vladimir Bashkirov. 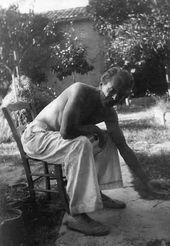 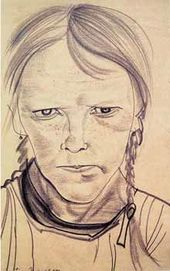 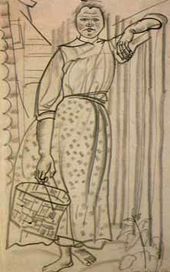