The Quintessential Moscow Artist. A Jubilee Exhibition of Vasily Tropinin at the Tretyakov Gallery

An exhibition marking the 225th anniversary of Vasily Tropinin (17801857) is running at the Tretyakov Gallery from May 25 to September 4 2005. The artist's creative work belongs to the epoch that is considered the “golden age” of Russian culture. 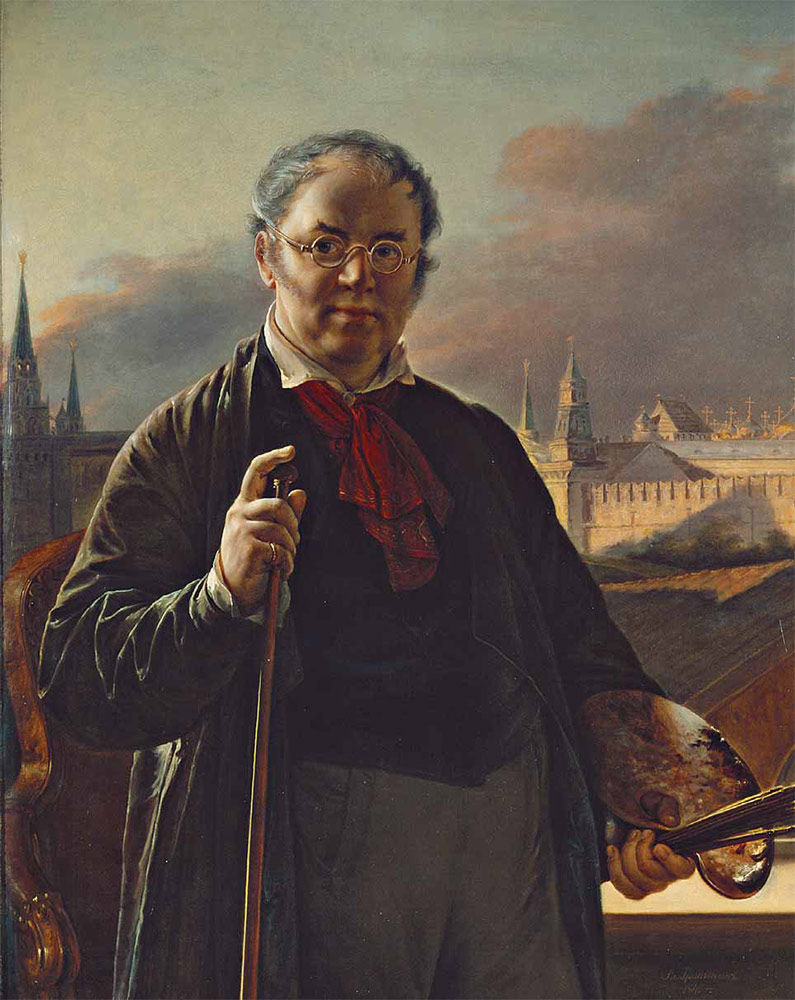 The artist's life as well as his career were very special in their own way; born a serf, Tropinin was fortunate to meet and to associate with such notable figures as Pushkin, Karamzin, Brulloff and Samarin. Despite the fact that he did not complete courses at the Academy of Arts, Tropinin was regarded as the best portrait painter of his time in Moscow.

Vasily Tropinin was born in the village of Karpovo in the small rural district of Chudov in the Novgorod province into a family of serfs belonging to Count Anton Minich*. Since his birth-certificate is missing, different dates for his birth exist, especially since the Russian tradition was to celebrate the name-day and not that of the birth itself; as a result the age of the individual was not always written down correctly. Currently, direct and indirect sources indicate the year 1780 as the year of his actual birth. As a child, the artist-to-be was given as a part of Natalya Minich's dowry to Count Iraklyi Morkov. It was in the Count's house that Vasily began to paint, making copies of "lubok" (popular prints) pictures.

From 1788 to 1804 Tropinin lived in St. Petersburg, attending at his master's will the portrait class taught by Stepan Shchukin at the Imperial Academy of Arts. In 1804 his work "Boy Grieving for a Dead Bird", exhibited in the annual Academy of Arts exhibition, was noted by the Empress Elizaveta and by the president of the Academy Count A.S. Stroganoff. But soon afterwards, following the wishes of his owner, he had to move to the Ukrainian estate of the Morkovs, the village of Kukavka in the Podolye province. There, with occasional travelling, the artist lived until the beginning of the 1820s; during those years he painted portraits, landscapes and church motifs, and married Anna Katina, with the subsequent birth of their son, Arseny. Portraits of the members of his immediate family are among the best works of the master. In 1820 a publisher and a collector, P.P. Svinyin, mentioned Tropinin's name for the first time in an article published in the "Otechestvennye Zapiski" ("The Domestic Notes") magazine.

1823 was a crucial year for the artist: he was finally released from bondage. In the same year he submitted the pictures "Portrait of E.O. Skotnikov", "The Lace-Maker" and "The Old Beggar" to be nominated as a candidate-academician. The following year brought him the title of academician for his "Portrait of K.A. Leberecht", and the rank of the tenth grade according to the Table of Ranks, which made it possible for him to apply for a personal noble rank. Several of his works displayed at the Academy exhibition enjoyed great success with the public. Settling in Moscow, the artist would live there until the end of his life. He managed to depict his time in vivid and colourful images - his models ranged from merchants and officials to Alexander Pushkin and other notable figures of Russian culture.

Vasily Tropinin became a free man in middle age, and the caprices and whims of his owner, Count Morkov, had formed his personality. On the other hand, his position as a "home" painter and Morkov's confidant allowed him to associate with educated people who were the friends and acquaintances of his owner. Good physical and mental health, as well as his own outlook on the world, based on his personal experience, religious beliefs and principles, allowed him to evaluate the circumstances of his own life in a positive way, saving his inner world from the moral torture of disastrous thoughts about social injustice.

The Tretyakov Gallery exhibition brings together works from all periods of his life, starting with the early Ukrainian chamber works and ending with the key late portraits, characterised as they are by a certain magnificence and decorativeness. A born colourist, Tropinin was a true painter, sensitive to the colour characteristics of nature and his models. His artistic temperament revealed itself most strongly in sketches and drawings performed with a lively, "painting-like" stroke. Tropinin's sensitivity to the aesthetic aspect of things allowed him to take in the traditions of Russian portraiture of the 1 8th century and to blend them with the high cultural standards of his own time in a creative way.

The romantic "Family Portrait", painted after the 1812 war, depicts the family members of Count Morkov who had survived the difficulties of wartime. The works from the most prolific period of the artist's creative life (from the 1810s and the 1820s) are distinguished by an exceptional variety of technique and sophisticated colour correlations (for example, the portraits of his wife and his son, "Boy with a Pipe", "A Spinner"). Some canvases that made him both famous and an Academy member are important exhibits of the exhibition.

His contemporaries believed Tropinin to be the most characteristic Moscow artist of his time. Knowing the life and manners of the city down to the finest details, he managed to express the world outlook and the very spirit of life of Moscow citizens in his creative work (among them the portraits of Bulakov, Ravich and Zubova). Portraying his models in dressing gowns, they became symbols of a domestic, private world and a spectacular decorative element at the same time. Nepotism was a typical trait of Moscow life; everyday life was domesticated as well. "Not to love and not to respect one's own relatives is considered in Moscow a greater sin than free thinking", Vissarion Belinsky wrote.

The twin portraits of Mikhail Protasyev and Elizaveta Protasyeva show an elderly married couple from the patriarchal and respectable circle of hereditary nobility that formed the core of Moscow society. The exhibition draws together the portraits of the artist's relatives Petr Barash and Lubov Barash from the collections of the Tretyakov Gallery and the State Historical Museum. Portraits of notable individuals of Russian culture, such as the sculptor Ivan Vitaly, the historian Nikolai Karamzin, the poet and slavophile Yuri Samarin, remain valuable as documentary evidence of the epoch. In 1836 the master met the famous Karl Brulloff, whose portrait Tropinin painted as a mark of friendship and trust.

Over time merchants formed a separate group among Tropinin's main clients. The quality of the portraits, the high level of real resemblance between the picture and the "original" and the short time of their execution attracted such sitters. The exhibition includes the portraits of the Kiselev couple from Shuya, as well as the portrait of Yekaterina Karzinkina, from a well- known family of tea merchants. Tropinin's genre scenes of the 1820s and 1830s, introducing the world of ordinary citizens to the world of art were especially popular, among them "The Guitar Player", "The Lace- Maker" and "The Gold Embroideress". Besides the paintings and graphic works, the exhibition displays archive documents, including the Morkov's coat of arms from the Russian State Archives of Old Acts which is on display for the first time.

Vasily Tropinin was not socially active, but he happened to be involved in the foundation of the Moscow Art Classes (later to become the School of Painting, Sculpture) as an unofficial tutor. For the students, most of whom were of humble origin, Vasily Tropinin was the personification of the possibility to gain freedom and to achieve a position in life due to talent and work. In 1843 Vasily Tropinin was elected an honorary member of the institution. The first version of the "Self-portrait with Brushes and Palette Against a Window Facing the Kremlin", created in 1844, is on display of the exhibition. This key work is the embodiment of the idea of the importance and noble character of the profession of the artist; the master himself and his whole life were a living proof of that idea.

The artist died on May 3 (by the old calendar, May 1 5) 1857 and was buried in Vagankovskoye cemetery in Moscow.

The exhibition in the Tretyakov Gallery is organised on the initiative of the Museum of Vasily Tropinin and of Moscow artists of his time. Some of the exhibits come from the State Historical Museum, others from the Scientific Research Museum of the Russian Academy of Arts and still others are from the Russian State Archives of Old Acts. Founded in 1971, with the collection donated to the city by the famous collector Felix Vishnevsky as its core, the Tropinin Museum has become a favourite cultural centre in Moscow. For more than 30 years the well- known expert on Russian culture, Galina Kropivnitskaya, was its director. Over that period the collection increased tenfold, a process that continues today. It is no accident that the Tropinin Museum is called the "smaller Tretyakov Gallery". Two exhibits are of special interest: "Portrait of Alexander Ton", who was an elder brother of the well- known architect, and "Portrait of Pavel Tuchkov", the hero of the Patriotic War of 1812, recently presented to the Museum with the assistance of the Moscow Government and the Moscow Coun-cii of Culture. Today the Tropinin Museum continues to experience great difficulties: its old buiiding needs major repairs and is closed for technical reasons. The organisers of the exhibition hope to attract public attention not only to the anniversary of the artist, but to the problems of a museum that was - and should remain - one of Moscow's gems.

Exhibition project was realized with support and sponsorship of Galina S. Proskuryakova

* According to Svetlana R.Dolgova’s archive investigations Tropinin was the serf of the Count’s wife Vera Nikolaevna, because, after the latter's marriage she remained the sole owner of the land which had belonged to her, including the village of Karpovo where the parents of the future artist were registered. 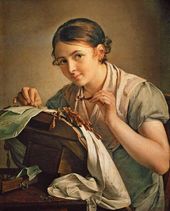 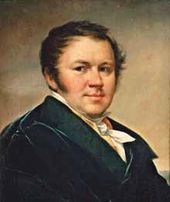 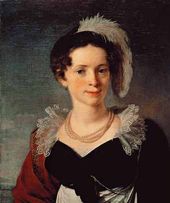 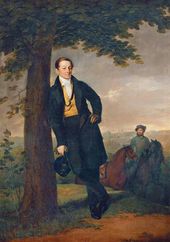 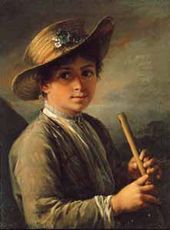 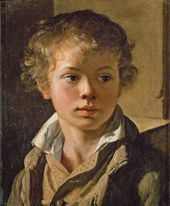 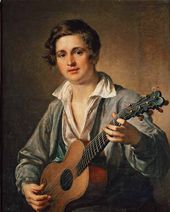