The Museum of Russian Art in Minneapolis

In May 2006, the Tretyakov Gallery will celebrate its 150th anniversary. As the years pass, we find ourselves constantly returning to Pavel Tretyakov and his vital role in the development of Russian art. A successful merchant and entrepreneur, Tretyakov claimed that "assembling the Russian school, as it is today" was one of his life's goals. 150 years later, we still remember Tretyakov with immense gratitude, such was his gift to society and future generations.

On the eve of this important anniversary, I was surprised and pleased to discover another man with a passionate interest in collecting Russian art on the other side of the Atlantic. Raymond E. Johnson, founder of the Museum of Russian Art in Minneapolis, Minnesota, has been a collector and connoisseur of Russian art for many years.

Naturally, Russian artists are not unknown in the USA. In the late 19th century, the American public saw works by Aivazovsky and Vereshchagin. The 1904 International Exhibition in Saint Louis included around 600 works by 150 Russian painters. The 1920s saw paintings by Repin, Sudeikin, Grigoriev, Goncharova, Larionov and masters from the Union of Russian Artists exhibited in the United States. American collections boast masterpieces by Russian jewellers, as well as paintings by Bryullov, Makovsky, Repin, Vereshchagin, Malevich and many other eminent Russian artists. Many famous painters from the first, second and third waves of Russian emigration settled in America, among them Nikolai Fechin, Alexander Archipenko, Boris Anisfeld and other avant-garde masters as well as various non-conformist painters.

Throughout the 20th century, in Europe and the USA Russia's contribution to world art was considered to comprise icons and the work of avant-garde masters. The large exhibitions of Russian art held in the West in the late 20th and early 21st centuries finally broadened this focus to include Russian Realist painting and other figurative trends. Between 1 995 and 2005 the State Tretyakov Gallery took part in more than ten large exhibitions of Russian art in the USA. The concept and composition of the massive "Russia!" event due to open in New York's Guggenheim Museum this autumn bear witness to the diversity of trends and traditions present in Russian art over the nine centuries of its development.

Ray Johnson has also played a part in destroying stereotypes. Unlike Western critics and the Western art market, Johnson preferred to focus on Russian painters whose art was firmly grounded in realism. These artists were no poor imitators, however: modern in spirit, they offered their own interpretations of the eternal themes of human relationships, life and death. Johnson's collection includes over 10,000 paintings. In 2003, he was named one of the top hundred American collectors. A large part of his collection is now housed in his museum. Located in a rebuilt church, this is literally a temple of Russian art.

In 2004, Johnson was made Honorary Consul of the Russian Federation in Minnesota. His Museum of Russian Art opened on 7 May 2005. The first exhibition in the new museum was organised jointly with the Tretyakov Gallery. Before coming to Minneapolis, it was shown at the Smithsonian Institution in Washington, where it was visited by over 70,000 viewers. The preview was held on the eve of international celebrations of victory in World War II. Visitors were reminded of Russian-American wartime alliance and the historic meeting on the Elbe. A new era of Russian-American cultural partnership and museum cooperation had begun.

Exclusive interview with Raymond Johnson for the "Tretyakov Gallery" Magazine

-      Do you feel like Peter-the-Great - I mean, like having made a window to the USA for Russian art?

Raymond Johnson: "Peter-the-Great" complex: in a very general sense your term is an appropriate description of the role our museum currently seeks to fulfill. The Museum of Russian Art (TMORA) is attempting to provide a "window" on Russian culture, history and art for the American public but unlike the situation in Peter's era, TMORA is faced with the task of explaining or dispelling broadly held misconceptions on the part of the American general public rather than dealing with a situation of public ignorance.

Since the end of World War II/The Great Patriotic War, the American media has been dominated by reporting the prevailing current political events between the United States and Russia/Soviet Union. The American public has been pre-conditioned by 50 - years of generally superficial reports of "What" happened between our two countries with little or no explanation of "Why" events occurred as they did. TMORA seeks to use all forms of Russian artistic expression as a vehicle to present a broader picture of how chronological, religious, cultural, economic and political factors affected everyday life in Russia just as those same factors do in the United States.

-      Who are your viewers/visitors of the Museum? Patrons of art, connoisseurs, or just ordinary people?

RJ. TMORA originally opened in 2002; I estimate that over 25,000 visitors have been to our locations in Minneapolis. Tens of thousands of additional visitors have attended exhibitions of TMORA art lent to other museums across the United States. Approximately 5% of our visitors are students, teachers or researchers who primarily have a scholarly interest in our unique collection of paintings. An additional 5% of our visitors seem to be first or second-generation Russian immigrants to the USA who wish to revisit memories of their homeland. The overwhelming majority of our visitors appear to be average American citizens of every ethnic and racial background who are interested in learning more about 19th and 20 th century life in Russia. I estimate that less than 15% of our total visitors have ever personally traveled to Russia before visiting our museum; most of our visitors are not art patrons and rarely personally own original art.

-     Is Russian art considered something exotic in the USA?

RJ. Our exhibitions are designed to dispel the broadly held preconception that Russian art is only to be associated with either avant- garde expressionist art or stridently political graphic subjects. Our visitors leave with the realization that Russian art is directly associated with many of the same significant stylistic art trends experienced in Europe and North America.

-      What's the attraction in TMORA for the American audience - the unknown way of life under the Soviets, the special Soviet/Russian mentality or something else?

RJ. Ours is the only museum in North America solely dedicated to the preservation and presentation of Russian art and artifacts. As such it is something of an object of cultural curiosity. Our new building was originally constructed in 1940 and has been under major reconstruction for the past 18 months; people are interested in seeing how a local landmark has been reconfigured to a state-of-the-art museum facility. Minneapolis has a vibrant museum community with 6 major public museums and numerous private museums for a resident population of 2.5 million. Ours is the newest addition to the museum community and people are anxious to see it for themselves.

-     Will TMORA change a one-way presentation of Russian art still viewed by Westerners as avant-garde or post avant-garde?

RJ. In addition to exhibitions of paintings, TMORA is planning to schedule future exhibitions of icons, lacquer boxes, amber jewelry, ethnic costumes, needlepoint and textiles. TMORA will serve to exhibit both our own collection of 19th-20th century paintings and all forms of Russian art loaned to us from both Russian and American museums and collectors.

-     Is TMORA an exhibition space or a house/home not only for the works of art but also for experts and specialists in Russian art of the corresponding period?

RJ. TMORA as exhibition or research space: As described above TMORA is both a multiple purpose art exhibition venue and an educational resource. We offer a continuing series of lectures and seminars conducted by both Russian and American academicians on various subjects of Russian art history. TMORA has financially supported the publication of numerous English language books, catalogs and journal articles written by independent scholars. Our museum actively lends paintings from our collection to college and university museums throughout the USA.

RJ. Favorite paintings... well, there is no single "favorite" painting in the collection since dif
ferent paintings appeal to me for different reasons. I have been actively involved in collecting and exhibiting Russian Art for the past fifteen years. During that time I've made friends with many outstanding Soviet/Russ-ian painters and some of them became my close friends. Unfortunately some are no longer with us but they are in my heart forever. As for my favorite works, it is very difficult to give preference to any single work of art. Therefore I'll name just two works of my friend and an outstanding modernist artist of the 20th century Geli Korzhev, his "Anxiety" and "Marusya". The latter was on display in Washington D.C. and in my museum, and I'd say that it really has produced a deep impression on me as well as upon the visitors to our museum.

-      What’s the most fascinating story of acquisition?

RJ. I have personally visited Russia over 50 times since 1989 and visited the homes and studios of hundreds of individual artists over the years. The most important story is the consistently emotional reaction offered by most of the artists with whom I have worked who saw in me an opportunity to have a portion of their life's work presented to an international audience beyond the borders of the Russian Federation. I promised these artists that I would actively create exhibitions of their paintings and not allow these works to be hidden away in various private collections. The creation of TMORA is part of my commitment to the Russian artists to ensure continuing public access to Russian art of the 20 th century.

-      How do you see the ways, possibilities and opportunities of TMORA's development?

RJ. Our museum is still quite young and will continue to expand and develop in many ways in the future. We hope to raise funds to permit us to extend expanded financial aid to American students to do original scholarly research on Russian art. I anticipate the future publication of a technical journal that will offer a vehicle for the national distribution of English language articles written by Russian, American or other international writers on the subject of Russian art. Our building has outstanding acoustical properties even though it was designed primarily for the display of static works of art. I anticipate that TMORA will host musical performances and literary readings at some point in the future. My vision is to have TMORA serve as a venue or as a facilitator for all forms of American public participation in the artistic accomplishments of Russia.

RJ. We have great appreciation for both the breadth of the Tretyakov collection of art and the professionalism of the Tretyakov staff. TMORA has already completed two significant art collaborations with the Tretyakov since 2003 and hopes to expand our programs that apply Tretyakov technical and physical resources in the future. TMORA will be conducting an exhibition of icons in the fall of 2005 and expects to employ the assistance of a Tretyakov staff expert to help TMORA both design the exhibit and to create the educational literature that will accompany the exhibit. TMORA hopes to help the Tretyakov by assisting in identifying other American museums that would host future tours of Tretyakov designed exhibitions in addition to displaying those exhibitions at our facility.

Valentin Rodionov and Raymond Johnson at the opening of TMORA, Minneapolis, USA 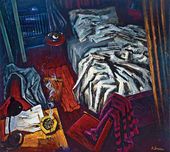 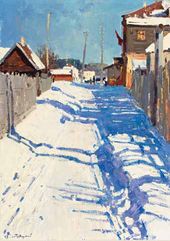 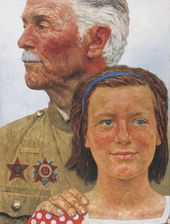