As a cultural capital, Moscow sees the opening of as many as five or ten new exhibitions daily. From the venerable old masters of the Pushkin Museum or the Tretyakov Gallery, to rising talent from the provinces in sombre basements on the outskirts, and fashionable “actual" artists in glitzy star-filled galleries: Moscow has it all. 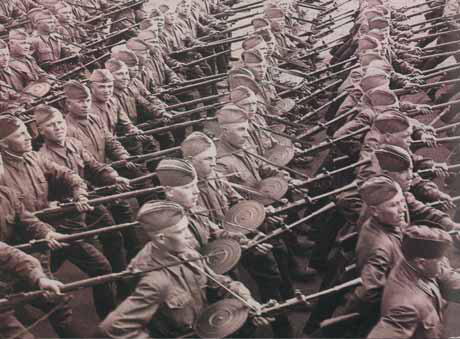 Dozens of military exhibitions were held recently to celebrate the 60th anniversary of Russia's victory in World War II, four among them of particular interest: "1418 Days” (1418 Dnei) in the Moscow House of Photography; "Art at War” (Iskusstvo na Voine) in the new exhibition space at the "October” paper factory; "10 Albums from the War” (10 Albomov o Voine) in the Shchusev Architecture Museum; and "Britain- Russia: A Shared Victory” (Britaniya-Rossiya: Obshchaya Pobeda) at the Gallery on Solyanka.

Designed by Yury Avvakumov and Alyona Kirtsova, the first event was spread over 12 rooms. Olga Sviblova's exhibition includes works by great Russian photographers from Mark Markov-Grinberg to Boris Ignatovich, correspondents who never returned from the war, such as Mikhail Prekhner or Sergei Strunnikov, and many nameless German soldiers who simply wanted to capture the chaos of the front line, the bitterness of defeat, the agony of death, the exultation of victory. Visitors can also view military archive video footage and listen to Sovinform- buro bulletins and wartime songs. The whole result is presented magnificently in the splendid INTERROS album.

The factory event, expertly designed by Sergei Mironenko, is a single installation in a single space. Dimly lit by wartime lamps, photos of artists and performers at the front are strewn over boxes of shells. Slowed-down video footage is accompanied by familiar songs; wartime films with well-known actors, a 1942 copy of the magazine "Sovetskoye Iskusstvo” and other memorabilia complete the picture.

In the Architecture Museum, ten albums of wartime photographs were shown for the first time. Taken by anonymous photographers assigned to the task by the management of an unfinished Palace of Soviets, these are exhibited behind glass, supported by various black constructions.

The Britain-Russia exhibition on Solyanka was first shown in Moscow during the war, in 1943. Alexander Fadeyev, Alexei Tolstoy, Konstantin Simonov, Vladimir Nemirovich-Danchenko and other eminent figures attended the opening. The British government organised the event to show Soviet people that the British were also living and working for victory. Shown again thanks to the British Council, the exhibition includes work from the best British wartime photographers such as Cecil Beaton. A floor below, visitors can see photographs by Viktor Temin - the first to capture the Soviet flag floating above the Reichstag.

The British Council has also just opened another exhibition in Moscow - the Sam Taylor-Wood event in the Centre of Modern Art in Yermolayevsky Pereulok. A fresh look at human states and emotions such as joy, eroticism, fury, pleasure and creativity, this includes photos and videos by the talented and successful "Young British Artist”.

Meanwhile, on Krymsky Val, a new Pavel Nikonov exhibition documents the many summers and autumns the eminent People's artist spent in Alexino, a village on the Volga in the Tver region. Like their ancestors, its inhabitants work the land and tend their cattle: the 50 paintings and 20 drawings shown at this event are a far cry from the artist's epic "October” and "Geologists”. Also at the Tretyakov Gallery on Krymsky Val is the Nikolai Chernyshev exhibition - a must for lovers of 20th-century Russian art. Held in honour of the 120th anniversary of the artist's birth, this is the largest ever exhibition of Chernyshev's work. Serov's pupil and a tutor at Vkhutemas, Chernyshev was one of the outstanding Soviet specialists in the theory and practice of monumental art and old Russian painting. 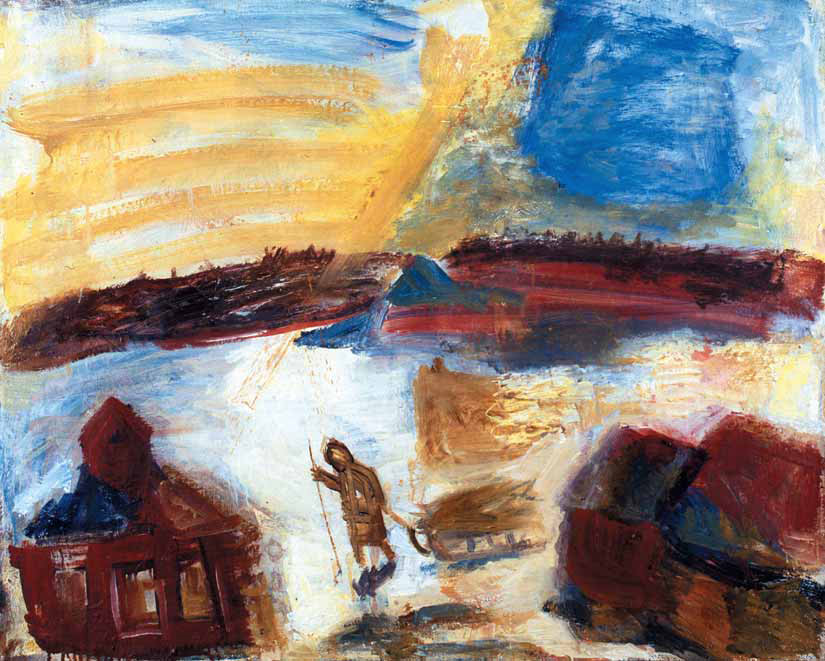 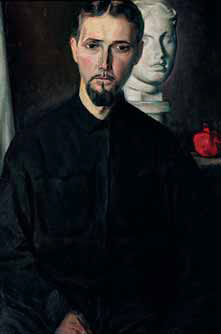 Returning to the Architecture Museum, there's another photography exhibition of note: Natalya Nikitina's "Crazy Moscow” (Moskva Bezumnaya). An art critic and photographer, Nikitina left the Soviet Union in the late 1970s. Her previous photographic studies tended to focus on well-known figures from the world of contemporary Russian art who passed through her flat in Cologne. "Crazy Moscow” is a view of the capital through the eyes of a native Muscovite living abroad: Western billboards by St. Basil's, red flags and gleaming white snow by the old Lenin museum, and other strange and striking images fill the charming wooden room which houses the exhibition.

As part of its project on leading 20th-century Western European artists, the Gertsev gallery is currently showing some interesting figures by the German sculptor Dietrich Klinge. A well-known neo-expressionist, Klinge sculpts his pieces from wood, subsequently copying them in bronze, deliberately preserving the cracks and roughness of the original material.

On the official front, there was a formal press conference held in the Novosti information agency on the forthcoming 51st Venice Biennale, with artistic plans and funding under discussion. 1.5 million roubles have been allocated from the state budget for the event, to be supplemented by $130,000 from the Ford Foundation. On 10 June, the Russian pavilion opened with two projects: "Idiot Wind” (Volshebny Veter) and "Too Long to Run Away” (Slishkom Dolgo, Chtobi Ubezhat). The first, an aero-sound installation by Sergei Provorov and Galina Myznikova from Nizhny-Novgorod, will allow visitors to experience real wind through a series of complex technical constructions. The second, an interactive video installation from the well- known Moscow group "ESCAPE”, is an intriguing game featuring the artists themselves. Dressed in red, Valery Aizerberg, Anton Litvin, Bogdan Mamonov and Liza Morozova move towards the viewers across a snowy white desert, their speed proportional to the number of viewers in the room. Yet, however fast they may move, they somehow never collide with the visitors.

Meanwhile, in Moscow the History Museum is showing an exhibition from St. Petersburg's Russian Museum, "The Peasant's World in Russian Art”. This boasts around 300 exhibits ranging from icons to toys, from Venetsianov's sketches to Eisenstein's cinematic experiments.

The ninth ART-MOSCOW has closed in the Central House of Artists. The 53 galleries taking part this year earned a total of $2,815,000, the most successful being XL, Aidan, Gelman, Krokin, Regina and VP-studio. The event included several special projects, such as the educational "Piterskiye” (from St. Petersburg), the video show "A Comedy of Positions” (Komediya Polozheny), a Bratso Dimitrievich exhibition and the immensely popular "Art for PLAYBOY” (Iskusstvo dlya PLAYBOY). Alexander Panov introduced his project "Within the Field of Vision” (V Pole Zreniya) dealing with poor sight. Presentations were held for the new Moscow Art Guide and other books connected with art. An auction, Modern Art Supports Folk Crafts, was organised, with the proceeds going to charity. There were also, of course, a multitude of performance events, a conference and meetings with the heads of several of the capital's museums. And, to crown it all, major names from Igor Makarevich to Andrei Bartenev could be spotted painting cows for the forthcoming "Cow Parade” festival in August ...

1945. Calm on the Oder River. Germany
Photo by Dmitry Baltermants

Nikolai CHERNYSHEV. Model Against a Yellow Background. 1924
Oil on canvas. 108 by 51 cm 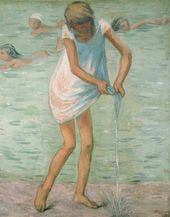 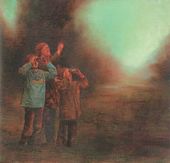 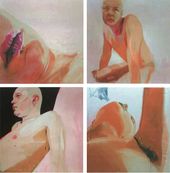 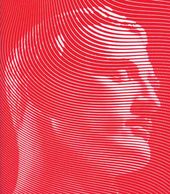 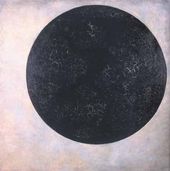 Ilya and Emilia KABAKOV. Model of the cupola to the installation for the performance of the opera by Messiaen “St. Francis of Assisi”. Bochum, Germany. 2003
Wood, plastic, oil, electric engine, bulbs. 175 by 75 by 85 cm 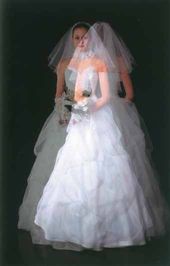