John Milner,
Professor Emeritus of the Department of Fine Arts at the University of Newcastle-upon-Tyne and leading specialist on Russian 20th century art, wrote a memorial tribute to the artist Kirill Sokolov (1930-2004) for the international journal LEONARDO from which we publish a slightly abbreviated Russian version and parts in English below.

Kirill Sokolov was an unforgettable character, a cultural ambassador in a boiler-suit, indifferent to the impression he produced, obsessed by art; the creative urge to draw, paint and sculpt and the pedagogic urge to organize the propagation of Russian culture in the West and vice versa. This latter mission, which was laid on him by the circumstances of his personal life, he implemented through arranging exhibitions and, from 1975 when he made the acquaintance of the editor and publisher Frank Malina, through his work as co-editor for LEONARDO, a journal which seeks to link art and science and to present artists to its readership through their own statements. Sokolov organized a whole panorama of publications on individual Russian artists beginning with Vladimir.

Favorsky whose seminal role as practitioner and theoretician was of great importance to his own work as engraver and illustrator.

Thirty years' residence in England Sokolov saw as an opportunity to marry his own tradition to those that now opened themselves to his direct experience, yet, essentially, he remained an artist of the Russian or, more precisely, of the Moscow school. Born in Moscow in 1930, he lived through the searing experience of war, except for a brief period in evacuation, in the capital, where he attended the Moscow Arts Middle School and the Surikov Institute and acquired a consummate professionalism evident from the earliest works. His life in art was a dialogue between contemporary European art, which he discovered while still an art student, the heritage of the Russian avant-garde, especially the "Knave of Diamonds", which he knew well and sought to incorporate into his own work, and the real experience of the Soviet 1950s and 1960s, including the slow thaw that set in after the death of Stalin which made possible the exhibition of his diploma work at the International Youth Festival of 1957 and his subsequent career as an illustrator (about fifty published books).

Sokolov also took inspiration from English artists (the engraver Thomas Bewick among others) and, in 1964, the year after his marriage to Avril Pyman, an English specialist on Russian literature, a series of linocuts on themes from Shakespeare's "Hamlet" was exhibited at the Literary Museum in Moscow and at Stratford-on-Avon. As in all works inspired by literature and not created to order (the series on Blok's lyrical drama and on Goethe's "Faust", for example) the Shakespeare-inspired work is rung through with tragic undertones echoing the privations and terror of the artist's formative years. This experience, however, he regarded as enriching and it did not prepare him for the feeling of estrangement when, in 1974, he and his family relocated to England and which is the subject of his emigre Notebooks. To begin with, he found it extremely hard to adapt to encountered indifference to Russian culture and to market conditions but continued to work independently and found a new outlet in sculpture. Gradually, he established a new reputation through exhibitions in the North East, where he now lived, in London, Edinburgh and eventually further afield in Europe and the US. Sokolov's association with the Hatton Gallery in Newcastle, where he cooperated on Exhibitions of Russian Art as well as staging his own, was particularly close. It was not until after a catastrophic fire at his house in Berwick-upon-Tweed, which he had decorated from floor to ceiling with eerie Venetian scenes that he reproduced in his new Durham home, that Sokolov became interested in the technique of silk screen printing, made friends among the artists of the Charlotte Press (later Northern Print) and embarked with their help and the enthusiasm of a force of nature on a series of experiments in this new medium involving the introduction of new materials and collage: the series "House without a Master", "Psychiatric Clinic", "Alternative Venice", "Emigration", "London, 1984" with its satirical take on Thatcherite advertising, and the more abstract "Constructions" which harked back to his earlier involvement with the Russian avant-garde. A large series of prints in various techniques on themes from "Faust" were shown in l988 in the Lyric Theatre, Hammersmith and then at Faust's supposed birthplace in Knittlingen, Germany. A special theme in Sokolov's painting to which he returned every year was Greece, where his fascination with the cultural weave of ancient Hellas, Byzantine churches and monasteries and the everyday present was expressed with great simplicity and in an altogether gentler manner.

During the 1990s there was increasing interest in Sokolov's work in Russia and between l992 and his death in 2004, he exhibited at various venues in Moscow, Perm and St. Petersburg and reacted in his own work to the opportunities afforded to revisit his native land. At this time the Tretyakov Gallery acquired a number of works typical of his innovatory use of active and passive materials to express the essence of landscape, including studies of Scotland and the Yorkshire moors and the haunting "Railway Stations", evocations of transience in a setting of cast iron. Although the artist's last years were overshadowed by illness he remained intensely creative to the last, unflinchingly facing up to death and pain in the series "Case History" and, on his deathbed dictating a list of subjects to which he intended to return, amongst them a painted wooden statue of a peacock, dry-points of Greek monks, and the Apocalypse.

As is often the case, I met the artist Kirill Sokolov by pure chance. In the middle and late 1970s the country was experiencing its first wave of mass departures among people connected to the arts and we, the young staff of the Tretyakov Gallery, were supposed to participate in the work of the Cultural Valuables Commission on the export of works of art together with the Soviet Ministry of Culture on a weekly basis. The commission was then housed in one of the buildings of the Novospassky Monastery. One day we received a visit from a grand-looking, handsome artist who was moving to Britain with his British wife and small daughter. I knew the artist to be a wonderful painter from the 1960s generation, and the most remarkable resident of our co-operative apartment building on Novolesnaya Street. We met and became friends - rather late, unfortunately. Yet over the many following years when Kirill and his wife Dickie were able to come to Moscow, as they did almost every year, they were our favourite guests.

Kirill would show his works, talk about his travels, and share his plans. In love with the world at large, with its great variety of nature, whether in Greece, the Middle East or his beloved Scotland, Kirill lived and breathed for Russia. Everything he did in Europe he wanted to show in Moscow, St. Petersburg and Perm which he visited for exhibitions and for no particular reason, out of a love for the world and people. He was interested in what was happening to us, in our plans. It was fascinating to talk to him over tea, coffee or something stronger. He very much wanted to establish links between the two countries - where he had lived, and where he was living - and organize an exhibit of Russian art in Edinburgh.

Unfortunately those dreams would not become a reality, but I am very glad that the Tretyakov Gallery collection includes Sokolov's works and thus guards his memory. I will be eternally grateful to fate for granting me the chance to meet such remarkable people - the artist Kirill Sokolov and his wife Avril Paiman, or Dickie, an outstanding theorist of literature and expert on the Russian poet Alexander Blok. 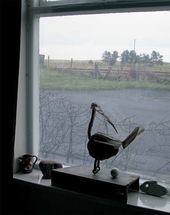 Through the Old Chapel Window 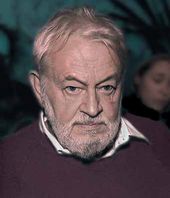 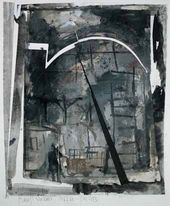 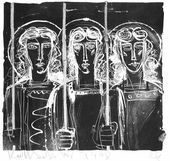 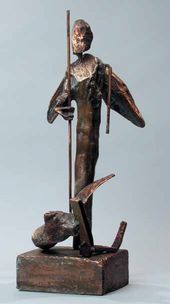