Guenther Uecker: A Pilgrimage to Another Reality

Twenty chapters, or twenty acts of an unfinished play about artistic life which the German artist Guenther Uecker is destined to complete have become a culminating event in Berlin’s cultural life from March to June 2005, alongside the exhibition “Nefertiti” in the Kunst Forum, and a celebration of the centenary of Albert Einstein.

The retrospective exhibition of the prominent master who gained world-wide recognition in the 1960s was displayed in three locations – the Martin Gropius Bau, the New National Berlin Gallery, and the “Neuer Berliner Kunstverein” (the New Berlin Union of Artists). All three were part of a tribute marking Uecker’s 75th birthday. 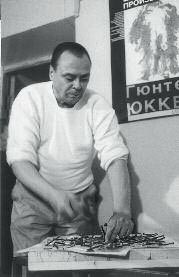 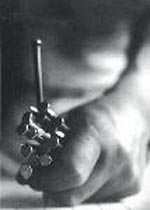 In 1988 a really impressive exhibition of works of this outstanding representative of the European post-avant-garde took place in Moscow, achieving great success and attracting the attention of a considerable audience.

After the Berlin International Film Festival the showing of the artistic evolution of one of the brightest representatives of the ZERO Group was a special event that mirrored the complex integration process of various and different aesthetic viewpoints on the contemporary history of society and culture. As Hannah Weitesmeier, the German art critic wrote about Uecker: "As a pilgrim between different worlds, born in East Germany and gaining fame and acknowledgment in West Germany, Guenther Uecker, with great persistence, keen attention and hard work, managed to create a body of art works characterized by significant artistic value, and uniting the formal elements of the East and the West."

The combination of Eastern and Western concepts and postulates does not mean a mere transformation of certain cultures or a spiritual heritage from this or that society, nor is it limited to the formal overview and structuralization of the creative experience of the past. It finds its realization in an almost ritual relation to light and shadow, sound and silence, movement and stasis, thus making its own virtual medium, with space and time phasing out some real natural materials and functional objects. Black and white as two poles, between which - according to Kazimir Malevich - the whole colour spectrum lies, are the two dominants in the metaphysical creativity of Uecker.

This no doubt allows some homage to the author of the "Black Square", and at the same time indicates Uecker's conversion to Zen-buddhism. The uniting nature of the colour white reveals itself not only as the colour of purity and lucidity, but also as a symbolic incarnation of light and meditative peace. The opposing notions of aggression and pacificism in Uecker's art works of the 1950-196os are associated with his black and white fantasies, the latter literarlly created by the artist's fingers: Uecker did not use a brush, instead rubbing dyes into the surface of the work, and modeling them with his hands moving from the centre to the periphery, and in this way stressing the necessity of participating physically in the act of creation of the work of art. This indicated a rejection of the physical automatism inherent in Abstract Expressionism.

The next significant stage of Uecker's creative evolution, the next "chapter" in his artistic life, was the introduction of some alien objects meant for concrete functional usage to the linear structures of his painting. The nail became one such object, substituting for the man-made rake applied as a device to scratch the surface of the painting in order to attain a certain texture. The nail was turned into an instrument and became an integral visual element of the artist's compositions. Following Lucio Fontana, who so elegantly emphasized the material nature of the canvas by using knife slashes and thus changed its spatial and time parameters, Uecker started to use the nail with a similar purpose - to break through the two-dimensional canvas space. Later he persistently started to turn the nail into an individual module - which is how the new series-structures came into being.

The monochrome tonal transfers from black to white, and vice-versa, were followed by the creation of objects in which the nail became a dominating formal plastic visual means, and in which its concrete function brought to Uecker's works an actionist quality, associated with different kinds of mystic and cult rituals. Furthermore, the so-called "nail reliefs" changed their structural grid according to the location of the source of light, with the shadow changing its vector in the course of movement on the surface of the canvas; thus, the viewer has a certain illusion of movement as the visual angle changes. The centric geometry of the symmetrically- and evenly-set nails on the flat surface resembles bio-fields. An almost physical vision of movement is given to the art work. But Uecker is not satisfied with the achieved effect, he strives to develop and strengthen the visual impact of the "created magnetic fields." In order to overcome the state of physical stasis he needed machinery, and Uecker began using electrical engines to make his compositions move; later he added acoustic apparatuses to introduce a sound element to his moving objects. Thus, step by step, Uecker strengthened the synthesized elements of the visual structures, switching from the monochrome to a polyphonic means of self-expression, bringing together the rational and the sensual in his own virtual worlds.

The opposing notions of destruction and construction define the dramatic collisions of our time, in which the artist sees the reflection of human nature - of good and evil, and light and darkness as counterparts, characteristic to a greater extent of post-industrial society. Such an expansion of metaphysical opportunities results in a wider understanding of the philosophical context of Uecker's art. He is constantly experimenting with new materials - sand, ropes, bags, ready-made and used objects - turning them into instruments of the creative process, or aesthetic signs and symbols, or visual modules. The artist attributes some new unexpected qualitative meaning to them; thus in the 1960s he was developing Dadaist traditions in his compositions with "ready-made", constructivist traditions in his kinetic objects. He was trimming furniture, sewing machines, or grand pianos with nails.

Uecker made the very act of creation of the artwork a kind of a solemn, almost ritual ceremony (Lucio Fontana and Fernandez Arman were making similar work at this time); in the 1960s he was destroying the canonized standards of art that had been inherited from the past. Uecker preserves all the formal and functional characteristics of the object, which motivates a dualism of perception in the viewer - we experience something very similar in everyday life when we confront contradictory realities.

Uecker is equally decisive when he destroys the border lines between certain kinds and genres of art, in an attempt to synthesize visual art and music, dance and word, theatre and cinema. The artist himself becomes an active participant in everything he does: for example, in happenings, in which the process itself becomes more interesting than the result, the latter remaining a fixation of the process presented in a form of a play.

In the three Berlin exhibitions of Uecker's works all these stages of his artistic evolution, and those that followed, received short commentaries from the artist revealing the quintessence of his creative credo, which was declared by Uecker in his Manifesto. It reads: "The new culture of telepathic forces will become the source of creative activity. It will substitute for the culture of mechanical thinking. An artist is a man who sees. What he has seen is revealed in his pictures. Contradictions inherited in a human being and expressed by a human being will become visual poetry".

The viewer involved in the virtual time and space of Uecker's art works can govern the process and gradually set in motion different visual formal structures and objects, switching on and off the sound, or defining the duration of their action.

From the black and white paintings to the symmetry of the relief magic signs made of nails which became Uecker's brand image, then to the transformation of the "ready-made" to mobile objects, from sculpture pricked with nails and bandaged tree trunks to the bags with knive blades jutting out of their womb and sand compositions, brought into action by some mechanisms and thus either "drawing" on the surface of the sand some moving spirals or making them disappear - all these testify to the fragility of life and the transient property of time like a sundial or hour-glass. And also to the mystical figures made of ashes, and no less mystical messages, characters revealing themselves through the black and white space to the spiral of time - such is Guenther Uecker's path which he himself has divided into the chapters of an extraordinary saga about suffering, searching and finding, emotions and speculations of an outstanding artist in his "pilgrimage to another reality". 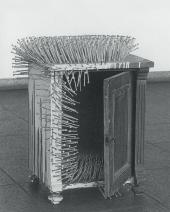 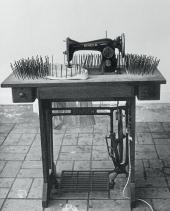 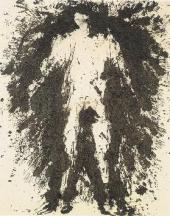 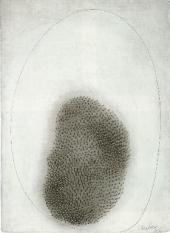 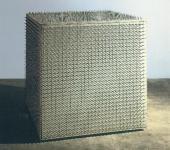